On January 14, 1733, James Oglethorpe and the rest of the first colonists departed Charles Town harbor for what would become Savannah, and the State of Georgia.

On January 14, 1835, James M. Wayne took the oath of office as an Associate Justice of the United States Supreme Court. A Savannah native, Wayne had previously served in the Georgia House of Represestatives, as Mayor of Savannah, on the Supreme Court of Georgia, and in Congress. His sister was the great-grandmother of Juliette Gordon Low, founder of the Girl Scouts, and his home is now known as the Juliette Gordon Low house. When Georgia seceded from the Union, Wayne remained on the Supreme Court.

Julian Bond was born on January 14, 1940 in Nashville, Tennessee, and was one of eleven African-American Georgians elected to the Georgia House of Representatives in 1965. After his election, on January 10, 1966, the State House voted 184-12 not to seat him because of his publicly-stated opposition to the Vietnam War. After his federal lawsuit was rejected by a three-judge panel of the U.S. District Court for the Northern District of Georgia, the United States Supreme Court ordered Bond seated.

True story: Julian Bond was the first Georgia State Senator I ever met, when I was in ninth grade and visited the state Capitol.

On January 14, 1942, Franklin D. Roosevelt issued Presidential Proclamation No. 2537, requiring Japanese-Americans, including American-born citizens of Japanese ancestry, as well as Italians and Germans to register with the federal Department of Justice. The next month, Roosevelt would have Japanese-Americans, including my grandfather, Joe Yamamoto, interned in concentration camps in the western United States.

Secretary of State Brian Kemp has certified the results in State House Districts 2 and 22, setting the contestants in the February 4 runoff elections.

Last week, I discussed the fact that District 22 candidate Meagan Biello is a pro-life conservative in the runoff election. Her opponent, Sam Moore, and the head of the local Young Republicans both contacted me to claim that Moore also is pro-life. I asked if Moore would support the Personhood Amendment and vote for it in the State House and he evaded the question, which leads me to distrust his statement of support for Pro-Life. Evasiveness by a candidate does not speak well of him and I can neither trust nor support Sam Moore.

I also received on January 8, 2014 an email from the Chair of the Cherokee Young Republicans stating:

Thank you for your report on Sam Moore. Liberty folks do support him. I do as well, as Chairman of the Young Republican….

I thought that elected leaders in the Young Republicans were prohibited from using their titles in endorsing candidates in contested races involving multiple Republicans. Is this now allowed?

The Tarvin campaign said, “Within hours of the final results from the Special Election on January 7th, candidate Neal Florence ignored the opportunity to focus on the issues that affect the people of this district.  He immediately engaged in political mud-slinging and innuendo through a press release issued by his campaign.”

The Florence campaign claimed that Mr. Tarvin was in violation of the law and stated, “With the ethical problems we have seen from some of our elected leaders, it is extremely disappointing to have a candidate for State House refuse to show where his money came from and how he spent it.”  The statement was in reference to Mr. Tarvin’s campaign being five days late filing his financial disclosure.

Here’s the Late/Non-filers page to which Tarvin is referring.

Today’s first pro-tip: if you are going to accuse your election opponent of being all kinds of a bad person for filing his campaign finance disclosures late, first check that your own are shown as having been timely-filed.

Doug Woodruff, the third candidate in the race, who didn’t make the runoff, has endorsed Neal Florence, stating.

“I am proud to lend my full support to Neal Florence. Neal and I share a commitment to putting the people first and believe in servant leadership. I ask you to join me in voting for Neal Florence in the runoff on February 4th.”

The time for convening having arrived

As we stated yesterday, the General Assembly will be in Session every day this week, and Tuesday through Friday of next week. 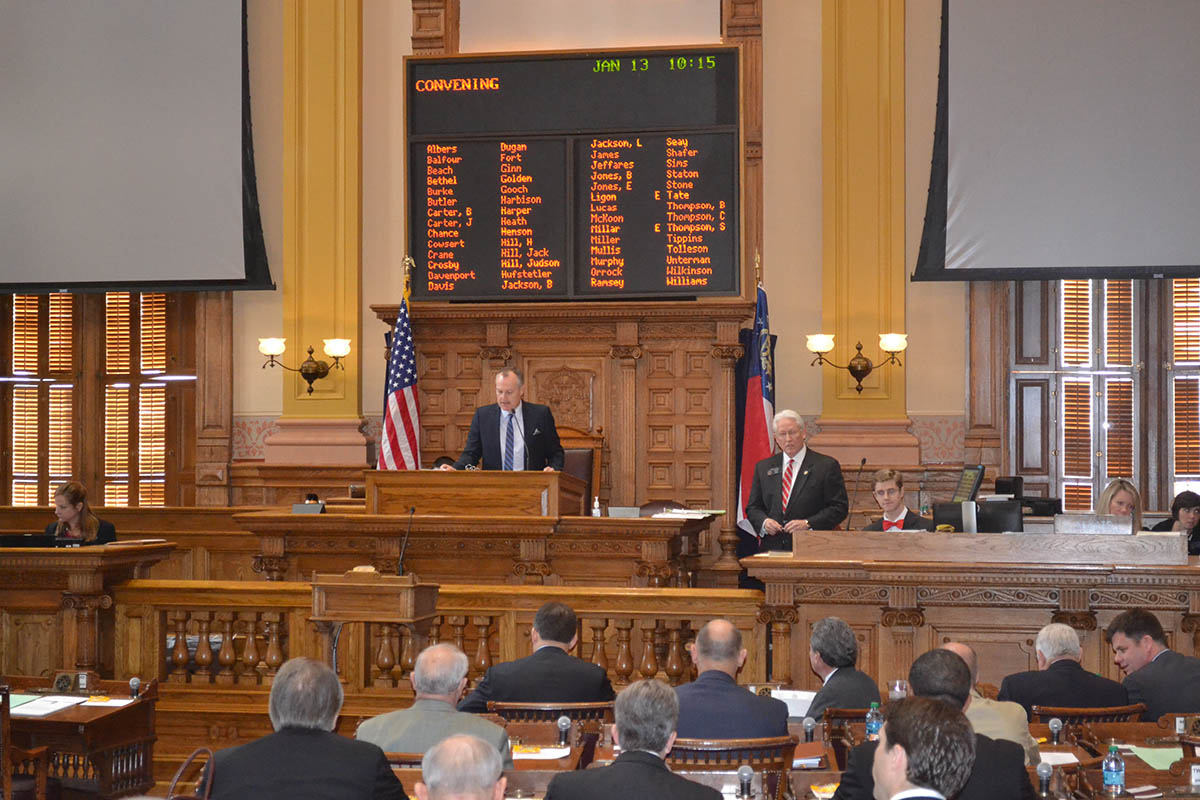 House and Senate convene at 10 AM.

2:00 PM to 4:00 PM House Insurance Committee meets in Room 606 of the CLOB. On the agenda is HB 606, the Patient Injury Act. The meeting is a hearing only with no vote scheduled on the legislation.

3:00 PM to 6:00 PM Setzler Subcommittee of the House Judiciary (Non-Civil) Committee meets in Room 132 of the Capitol. On the agenda is House Bill 671.

Rep. Austin Scott Our office will be hosting the first 2014 Mobile Office next Tuesday, January 14th, in Valdosta from 9am-12p. I encourage you to drop by and meet with one of my district representatives if you need assistance with a number of federal issues ranging from Medicare and Social Security to Veterans’ benefits. View additional details here: http://1.usa.gov/19VewBt.

2014 is starting off with a bang with newly announced candidates and some really great upcoming events that we know you’ll be excited about!  Please join us as we will have our fellow member, and Conservative Republican, Colin Martin speaking to our party about his newly announced Mayoral Campaign. We are also very pleased to announce that our additional special Guest Speaker will be Richard Woods, a Candidate for State School Superintendent, who will share information about his campaign.

Sportsmen and women directly support more than 31,000 jobs and generate more than $3 billion annually in Georgia

Gwinnett County Board of Commissioners Chairman Charlotte Nash will provide an overview of the County’s efforts in economic development, public safety, revitalization and transportation. Nash will also review 2013 achievements as well as unveil the vision for 2014 and beyond.This annual favorite is co-hosted by the Gwinnett Chamber of Commerce and the Council for Quality Growth. Space is limited – secure your seat to this informative luncheon by registering today! CLICK HERE TO REGISTER Chamber and/or Council Members: $75  | …

Come socialize! This will be our Happy Hour event for January. There will be no program, no speaker, just Young Republicans having FUN!!!!

Old Vinings Inn was built in the 1880′s and served as the village post office. Over the years, the building was purchased and renovated, used as an apartment building, a general store, a filling-station with a family residence upstairs. This unique setting is full of warmth and of history. Today’s Old Vinings Inn is inviting and sophisticated while preserving its rich history — the perfect setting for an evening out.

David Wellons, a 25-year veteran of the health care industry, will speak on “Obamacare and what we can do about it.”

Governor Nathan Deal will be joining us. This is a combined event with the Republican Women of Hall. Please watch for more details to come soon.