On January 7, 1789, Georgia voters cast their first ballots for President of the United States of America. Georgia’s electors met the next month in Augusta and cast Georgia’s electoral votes for George Washington.

An Act supplementary to an Act entitled ‘An Act for appropriating a part of the unlocated territory of this state for the payment of the late state troops, and for other purposes therein mentioned, declaring the right of this State to the unappropriated territory thereof, for the protection and support of the frontiers of this State, and for other purposes.’

This was one of the first major economic development undertakings by the state government and would come to be known as the Great Yazoo Land Fraud. The bill, passed under the pressure of intense lobbying, was such an abomination that the next year’s General Assembly revoked the Act and ordered all copies of the legislation burned, . 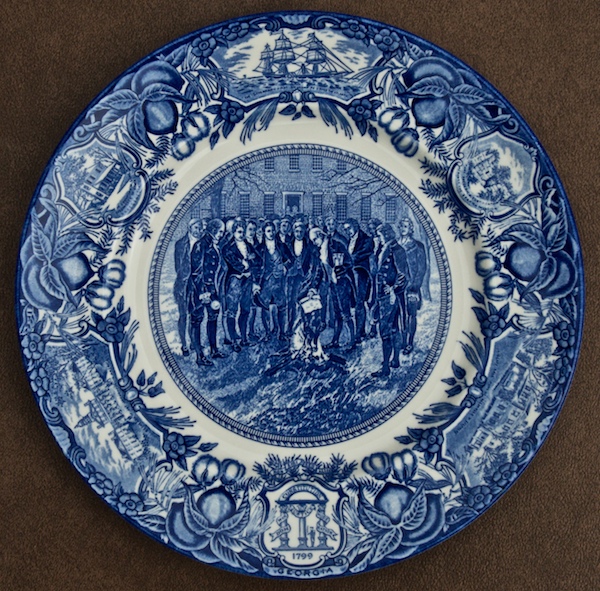 In 1933, the Transylvania Club of Sandersville, Georgia commissioned a set of commemorative plates by Wedgwood; Mr. C.D. Shelnutt, Mr. C.F. Irwin, and Mr. B.J. Tarbutton paid the required deposit to begin production of the plates. In 1974, then-Governor Jimmy Carter signed a resolution of the General Assembly naming the plates the official historical plates of Georgia, and they continue to be offered for sale in pink or blue.

People who had purchased land under the Act sued to prevent the state’s overturning its own conveyances, and the United States Supreme Court for the first time invalidated a state law as unconstitutional, in a case styled Fletcher v. Peck (1810).

On January 7, 1961, Hamilton E. Holmes drove from Atlanta to Athens to enroll in the University of Georgia, beginning the desegregatation of the institution.

On January 7, 1972, Lewis F. Powell, Jr., having previously turned down appointment to the Supreme Court of the United States, was sworn in as an Associate Justice, along with William Rehnquist, who would be elevated to Chief Justice by President Ronald Reagan. Powell earned his undergraduate and law degrees from Washington & Lee University and its School of Law.

On January 7, 1997, Georgia’s Newt Gingrich was reelected Speaker of the United States House of Representatives, the first Republican reelected in 68 years; he would resign his Congressional seat less than a year later.

On January 7, 1999, the Senate impeachment trial of President Bill Clinton began. Chief Justice of the United States William Rehnquist presided and Georgia Congressman Bob Barr was one of thirteen house “managers,” responsible for prosecuting the case in the Senate.

The polls will be open today from 7 AM to 7 PM for Special Elections in Georgia State House District 2 (Catoosa, Walker and Whitfield) and District 22 (Cherokee, Forsyth and Fulton Counties.

If you live in one of those counties and have questions about whether you’re eligible to vote tomorrow and where, please login to the Secretary of State’s My Voter Page. You may also check with your county Board of Elections.

Yesterday, one of the candidates in House District 22 asked me to link to his campaign Facebook page instead of his personal page. I replied that I would have done so if I’d been able to find is, as I had searched for it that morning.

Pro-tip for politics: if you’re using Facebook in your campaign, title your page so that it’s easily found by people searching on your name.

Today marks the ending of the grace period for candidates filing their December 31, 2013 campaign contribution disclosure report. So far, this filing period has been remarkably devoid of complaints about the filing system.

Retired Marietta Assistant Fire Chief Scott Tucker announced he will seek the Cobb Commission District 1 seat being vacated by Helen Goreham, who has announced she will not run for reelection. From the campaign press release:

Tucker brings a lifetime of service to his campaign. He worked for the City of Marietta Fire Department for over 30 years before retiring last month as Assistant Fire Chief and Fire Marshall. He has lived in Cobb County for almost 50 years and has also owned and run two small businesses.

In addition, Tucker has served as a volunteer wrestling coach at Mount Paran Christian School and a volunteer youth director at two Cobb County churches.

Tucker pointed to his experience as Fire Marshal and Assistant Fire Chief as preparation for the position of county commissioner.

“I was responsible for being a bridge between local businesses and county, city, state, and federal officials to help businesses comply with code and keep things moving forward. That is the kind of cooperative, pro-business spirit we need on the county commission,” said Tucker.

Tucker joins former Cobb Commission Chair Bill Byrne in the race. The Marietta Daily Journal wrote about Goreham’s retirement, which she announced in a letter to the editor of that paper, and the race that’s shaping up.

“I believe that most of the folks who placed me in office are pleased with the value system that I’ve established,” she wrote. “With that being said, new challenges loom for District 1 and it will be an opportune time to bring in a new face with a new perspective. I have decided to retire at the end of my term in 2014 and pass the baton.”

Goreham came to prominence in 2002 as a member of Homeowners Opposed to Powerline Encroachment for Cobb County, fighting the Georgia Transmission Corp.’s plans to erect high-voltage power lines through west Cobb. She handily defeated a better-known candidate for her seat on the commission and four years later pulled off the remarkable feat of defeating five challengers (all men and several of them noteworthy candidates in their own right) in the Republican Primary without a runoff.

Goreham was not expected to have an easy time of it if she chose to run again. She had angered some with her support for a property tax hike in 2011 and angered others with her vote last fall in favor of using county tax dollars to facilitate the Braves’ move here.

Democratic former State Representative Elena Parent announced yesterday that she filed to begin raising money to run for State Senate District 42, which is being vacated by Jason Carter in his run for Governor.

In the Tenth Congressional District, Republican Mike Collins is reporting $150k raised this quarter and $232k cash on hand.

Former Lawrenceville City Council member P.K. Martin IV announced having raised $31k and having $29k cash on hand in his run for Senate District 9 against incumbent Republican Don Balfour. Balfour’s June 30, 2013 disclosure showed cash on hand in excess of $673k, though it’s not clear what kind of a toll, if any, his recent legal bills, estimated at over $100k will take. He has not yet filed his year-end 2013 Disclosure.

The Georgia GOP will partner with District and County Republicans to organize and promote the following debates:

And the primary care gaps are more critical in rural counties and some inner-city areas, said Cherri Tucker, executive director of the Board for Physician Workforce, which has been producing such reports since 1986.

“We’re not getting the physicians in fast enough to meet population demands,” Tucker said.

The overall population of Georgia increased by 18.3 percent from 2000 to 2010. The state’s physician workforce actually outpaced that, growing by 26 percent. But a breakdown of that workforce growth paints a less rosy picture.

The increase for primary care doctors was 14.5 percent, compared with 36.7 percent for specialist physicians. The numbers for family medicine, internal medicine and pediatrics all improved, while ob/gyn and general surgery actually fell.

Meanwhile, the overall physician population is aging. More than half are 50 or older, the report found.

“It is a concern,” Tucker said. Nationally, many doctors are retiring early, at age 55, she said. “If physicians in Georgia opt to retire earlier, we will have a much worse shortage of physicians than we expect.”

Obamacare will likely make this worse, in my humble opinion.

Georgia pays its correctional officers less than other Southeastern states, and it cost taxpayers roughly $30 million to retrain 3,000 replacements for officers who quit during the last financial year, according to state auditors.

The audit concluded that boosting pay alone may not reduce turnover. reported that auditors said long shifts and dangerous conditions were contributing to turnover in the state’s Department of Corrections and the Department of Juvenile Justice. Lawmakers on the Senate Appropriations Committee sought the audit.

It’s unclear whether state leaders will act to raise pay. Rep. Jay Powell, R-Camillia, who chairs a House subcommittee that drafts the budget for public safety agencies, said policymakers need to fulfill promises made over the last few years to other law enforcement agencies that saw their funding dwindle during the last recession.

A United States District Court held that Florida’s requirement that welfare recipients be drug tested violates the Fourth Amendment prohibition on unreasonable searches and has stayed enforcement of the state law. Similar legislation in Georgia has not yet gone into effect.

Spencer, R-Woodbine, said he and Sen. William Ligon, R-St. Simons Island, will work together to make a technical college a reality in Camden County.

Funding for the $16 million campus at a 31-acre site in Kingsland off Interstate 95 at Exit 7 was pulled unexpectedly last year after concerns were raised about the simultaneous construction of new Altamaha Technical College campuses in Brunswick and Kingsland.

The city of Kingsland and the Camden County Joint Development Authority have already spent an estimated $500,000 to build the infrastructure needed to support a campus at the site.

Spencer said he will ask for funding for the Kingsland campus and for improvements to a technical college in Waycross that will be part of the merger between Okefenokee and Altamaha technical colleges. The two colleges will be named Coastal Pines Technical College after the merger goes into effect in July.

“It really looks good this year,” Spencer said of the possibility of funding for a technical college in Kingsland.

Camden County is also looking for a new County Attorney after the incumbent accepted an appointment to Camden County Juvenile Court.

State Rep. Wendell Willard will again push for legislation to reform civil forfeiture during the 2014 Session of the General Assembly.

“I think we’ve got a good chance to get it through this time,” said Willard.

“We’ve had a huge disagreement on this matter,” Norris added.

In order to fix what Norris believes is a “perceived” problem, however, he said the Sheriff’s Association would support regulations to make the reporting of asset seizures more transparent for the public. But he said the group would not stand for the discussion to involve what he claims are false stories in the media about officers seizing innocent people’s assets.

It was determined by the committee that clearing an individual’s name after a wrongful conviction or restricting access to expunged criminal records can be expensive, time-consuming and tedious. In addition, the committee found that inaccuracies or omissions in criminal history records are common and may hinder an individual’s chances of obtaining gainful employment or housing.

Based on these findings, the committee presented the following recommendations to Governor Nathan Deal for consideration:

Governor Nathan Deal will now work with committee members and interested stakeholders to evaluate the committee’s findings and determine whether future reform efforts are necessary.