No day of the year better illustrates the duality of Georgia’s place in American history than January Second. On January 2, 1788, delegates to a convention in Augusta voted unanimously and Georgia became the fourth state to ratify the Constitution of the United States of America. On January 2, 1861, Georgia voters went to the polls to elect delegates to the Secession Convention to be held January 16th in Milledgeville, then Georgia’s Capital.

On January 2, 1916, Associate Justice of the United States Supreme Court Joseph R. Lamar died in Washington, DC. Lamar was born in Ruckersville, Georgia and grew up next door to best friend Woodrow Wilson, who served  Lamar attended the University of Georgia, received his BA from Bethany College and his law degree from Washington & Lee University School of Law. Lamar served in the Georgia House of Representatives and on the Georgia Supreme Court before being nominated to the United State Supreme Court by  President William Taft (R-Ohio). 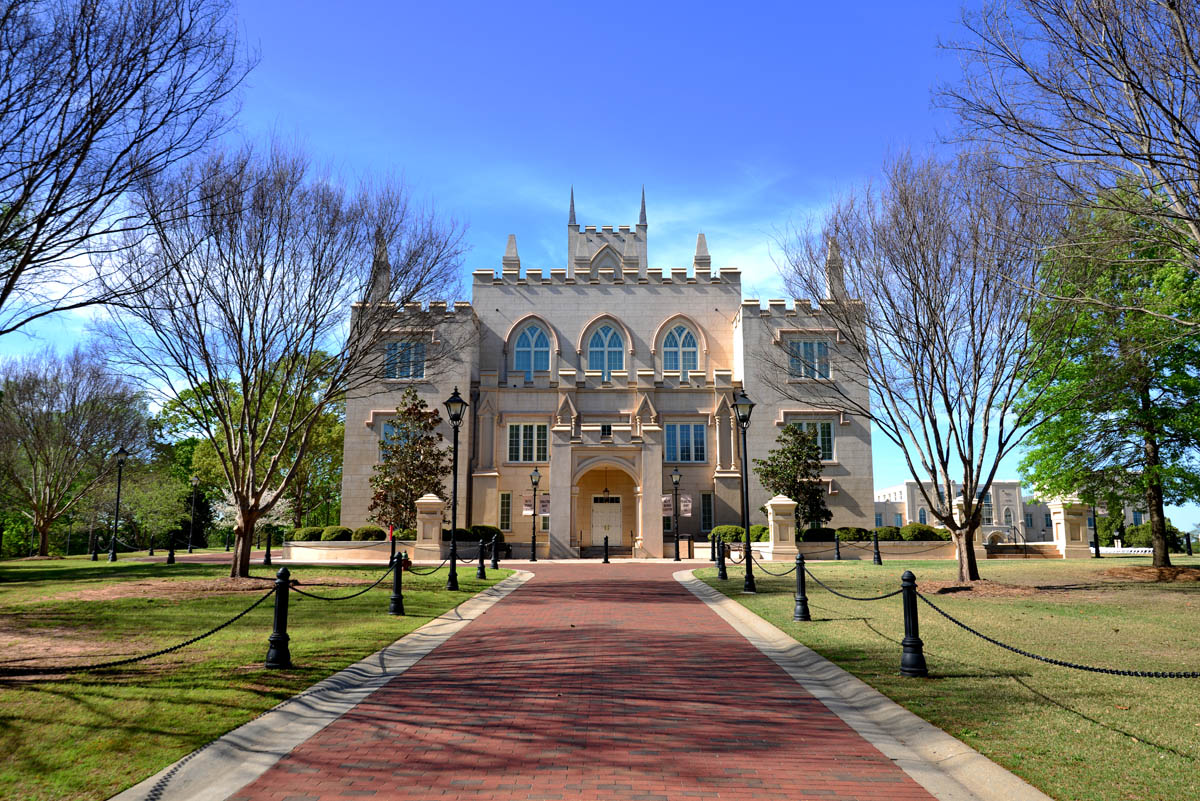 Polls are open in HD 2 and 22 Special Elections

Check the Secretary of State’s website for information on where and when you can vote in the Special Elections for House District 2 (Catoosa, Walker, and Whitfield Counties) and House District 22 (Cobb, Forsyth, and Fulton Counties).

Speaking of Secretary of State Brian Kemp, his official website has a new design, one that’s responsive to screen size and should work well on tablets and smartphones. 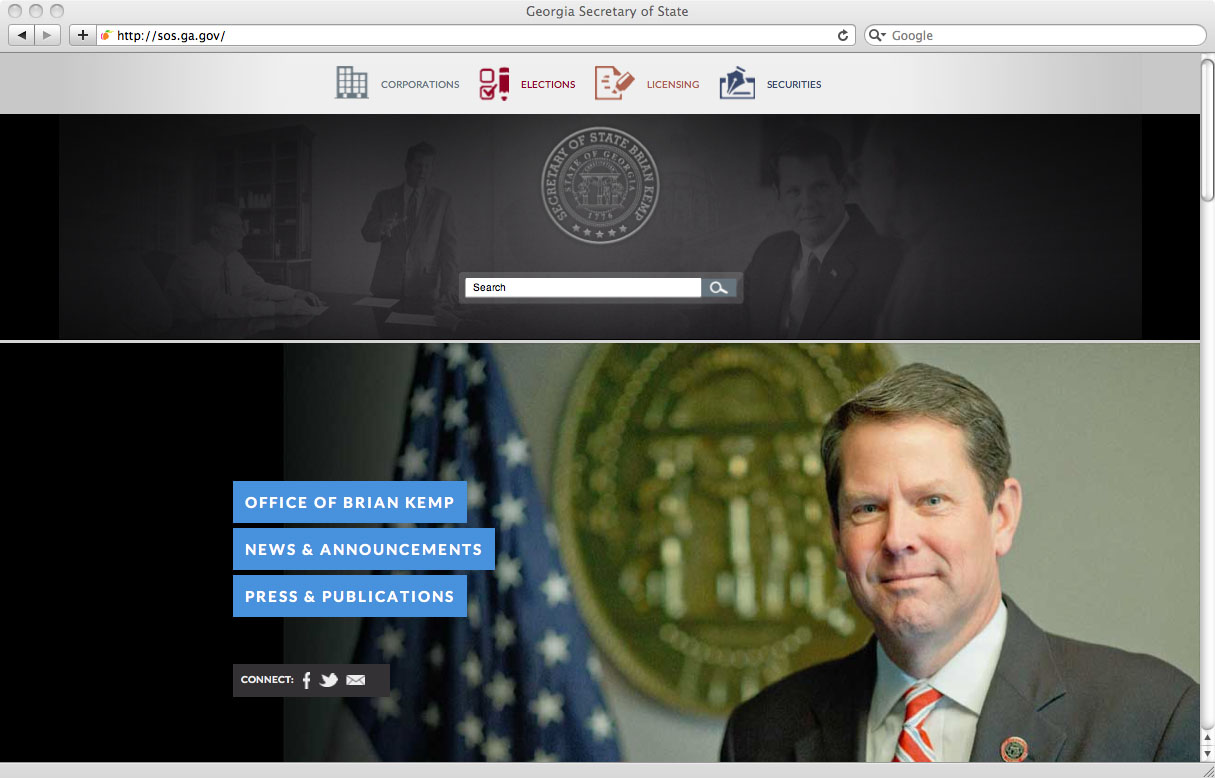 One thing I would note is that it looks like his photo was taken by the same guy who shot David Perdue’s early headshots, as well as some for Donna Sheldon and Barry Loudermilk. I’d bet the shots were taken with a Nikon D4, D800, D800E, or D600. It’s easy to correct in the camera, and if you’ve already taken shots with a green cast, you can correct it in Photoshop.

With the New Year came new reporting and registration requirements for lobbyists, and it appears that the Georgia Government Transparency and Campaign Finance Commission online system may not be up to the task. Last night, we saw numerous reports of lobbyists registering for this year but not receiving a promised email to confirm their registration.

We also heard over the weekend that the campaign disclosure system was having a problem where it won’t allow the download of .pdfs of working files. So if you want to double-check your work, you may be out of luck.

According to the State Ethics Commission website, here are the upcoming deadlines for state campaigns.

So, for the first time under the new law, candidates with elections this year have an extra disclosure due at the end of January.

Here’s my advice for anyone with reports due in the coming days. First, file early, even if it means that you might need to amend later, because you get fined for filing late, not for amending a timely-filed report. Second, if you do find the disclosure system bogging down and throwing errors, document it, document it, document it. Screenshots are your friend here, as are emails to the Commission’s help center.

Other new laws now in effect

Last year’s Lobbying Reform push, which brought us the new January 31 disclosure designed to capture last-minute fundraising in advance of the legislative session, we also have new limits on lobbyist gifts to legislators.

While the ethics laws set the first state limits on how much a lobbyist can spend, there remain considerable loopholes and questions about how the laws will be enforced. The state ethics commission, which has been dealing with various investigations and federal subpoenas, is tasked with interpreting the new laws and creating rules for compliance. That process could take weeks or months.

Under the new laws, lobbyists will not be able to spend more than $75 at a time. Previously, lobbyists could spend as much as they wanted as long as it was noted on disclosure reports filed with the state.

Potential loopholes exist. For instance, lobbyists can still spend more to host group events where all members of the General Assembly or all members of a smaller group, such as a caucus, are invited. In addition, the $75 cap is on lobbyists, not lawmakers, so it’s conceivable that more than one lobbyist might join forces and split the cost so each doesn’t exceed the limit.

Also notable about the Lobbying legislation is a new definition of “Lobbyist” that broadens who must register with the State Ethics Commission, and zeroes out the registration fee for lobbyists to allow unpaid or modestly paid citizen-lobbyists to register without a financial burden.

All new employees in childcare facilities must be cleared through a national fingerprint background check.

Juvenile Justice Reform, passed with the support of Gov. Nathan Deal as the sequel to justice reform for adult offenders and enhances the flexibility of judges to sentence juveniles to programs other than traditional youth detention centers.

“Currently, if we take a child and put them into a called ‘secure detention,’ that child is going to cost the state over $90,000 a year. You could put children through the finest college in this country for less cost than that,” said Rep. Wendell Willard, (R) Sandy Springs, the bill’s primary sponsor.

That high price tag is attributed to the cost of educating a child while he or she is incarcerated. Instead, the community-based programs will keep youth offenders at home with their families and at their regular schools, greatly reducing the cost to the state.

Georgia’s Return to Play Act of 2013 requires coaches to pull kids displaying signs of concussions off the fields for medical evaluation.

The law will keep children who’ve suffered head injuries from playing until they’re cleared by a doctor.  Some say it sounds good, but others worry it won’t work.  The players dashing down the field each game now have extra protection.

“It’s always in the back of your mind when any of your children play sports that, you know, there’s always a chance that it could happen,” said Larry Smith, Parent.

A new state law requires coaches to pull players who may have suffered a concussion out of the game.

“Basically, what it does it makes people aware of what they are and what dangers it could lead to,” said Dr. Mike Busman, Family Medicine and Sports Medicine Physician.

Busman said recognizing concussions can be tricky.  He said removing injured players from games is essential before they get hit again.

There’s a burning Mercedes in your yard

State Senator Brandon Beach had an unexpected visitor in the form of a flaming Mercedes that his a brick wall feet from his house.

“We heard a loud noise, ‘boom,’” said Sen. Brandon Beach, whose home sits just on the other side of the wall. “I thought a transformer blew or something.”

“It would have (hit) my car if that hadn’t stopped him,” he said of the wall that curtailed the car’s momentum.

Neighbor Theresa Lynch said she also heard the impact and ran outside to investigate.

Bob Bar drops the “I Bomb”

December 19th marked the fifteenth anniversary of the impeachment of then- President Bill Clinton by the House of Representatives. As the first member of Congress to file an official impeachment document and one of the 13 House members who prosecuted Clinton’s subsequent trial in the Senate, I was intimately involved with — and in — that process. Not only was the 1998 impeachment a powerful and necessary response to the gauntlet throw at the feet of Congress by the Clinton Administration, it was an important exercise employing a mechanism purposefully incorporated in our Constitution by our Founding Fathers.

Today, talk of impeachment is once again growing, but the lessons from previous impeachment proceedings must not be ignored. As was the case with President Richard Nixon in 1974 and Clinton in 1998, there is growing evidence President Barack Obama has engaged in “serious offenses” that “subvert” our government and “undermine the integrity of office.” It is interesting to note (as I did in an April 25, 1997 opinion piece in the Wall Street Journal) that such terminology was used in a February 1974 report written by the staff of the Nixon impeachment inquiry, outlining the “constitutional grounds for presidential impeachment” – a report a young lawyer named Hillary Clinton helped draft.

Even a passive observer of the machinations of the Obama Administration would be hard pressed to deny that such damning language is applicable today as it was to Bill Clinton and before him to Richard Nixon. Like his predecessors, Obama ascribes to the philosophy blatantly articulated by Richard Nixon a generation ago, that “[w]hen the president does it, that means it is not illegal.” It is for this very reason why the impeachment process exists, and why Republicans should never consider impeachment “off the table” in addressing the misconduct of President Obama who is, as Hamilton declares for us, a “public man” abusing the “public trust.”

As in 1998, the integrity of the office of the presidency hangs in the balance; and our Founding Fathers watch us still.

The most likely nominee for the GOP Senate nomination is longtime Republican Congressman Jack Kingston.

9th District GOP of Georgia Save the date for a visit with Governor Nathan Deal on Thursday, January 2, 2014, at 7 PM, at the Achasta Club House Grille in Dahlonega, 639 Birch River Drive. This intimate gathering around the fire with refreshments is being co hosted by the Dawson County Republican Party, Lumpkin County Republican Party and Foothills Republican Women.

Twin Peaks? Really, Bro? Is that before or after the gender sensitivity training session?

Come join us for our regularly scheduled monthly meeting and start off the New Year right! The meeting will be Thursday, January 2nd at J. Henry’s. Those wishing to socialize and purchase dinner should arrive at 6 PM, with meeting starting at 7 PM. Our guest speaker will be David Pennington. David is running for Governor of Georgia. He is a small business owner and Mayor of Dalton. Please make every effort to attend this meeting and be an informed…

Join us for our first breakfast of 2014, when our speakers will be candidate for Governor David Pennington, Senate candidate Karen Handel, State School Superintendent candidate Nancy Jester and House 97 candidate Dahlys Hamilton. Doors open at 7:45 AM for breakfast, and the meeting starts at 8:30. You can order a full buffet breakfast for $10, juice and coffee for $5, or pay a $3 door charge. Make your reservations for breakfast before January 3rd.

Jack Kingston is having a Grand Opening kickoff party for the new headquarters of his US Senate campaign. The party is open to all– volunteers, supporters and anyone else who can make it out to meet Jack, and your invitation is attached. Please come, bring any guests you would like, and welcome the Kingston for Senate campaign to the neighborhood!

Jack Kingston, US House Representative for Dist 1 and US Senate Candidate for GA, is appearing in the fourth of our US Senate candidate forums We are expecting a large crowd so come early to get your seat and to spend time talking with Rep Kingston before the program begins. Short candidate speech followed by questions posed by our panel Please bring a friend, neighbor, spouse – or even a stranger – who is interested in learning more about candidates…

You are Invited to a Reception for Senator Judson Hill, Vice Chairman of the Republican Senate Caucus, Chairman Senate Finance Committee. Suggested Contribution $250    Contributions may be made payable to Friends of Judson Hill, 3102 Raines Court, Marietta, GA 30062. In lieu of your appearance, please consider making an online contribution at www.judsonhill.com