Voting will be held today for Mayor and City Council in municipalities across Georgia, as well as a number of SPLOST (Special Purpose Local Option Sales Tax) referenda and local issues such as bond issues (Marietta) or Sunday Sales of alcohol.

Visit the Secretary of State’s website and use the MVP tool to check your voting information.

Today also happens to be Bob Barr’s birthday. The birthday party is from 5:30 to 7 PM at the Red Hare Brewing Company in Marietta.

We will have at least two Special Elections coming up.

In State House District 2, a vacancy has been created by the hiring of Rep. Jay Neal for a job in the Department of Corrections.

This photo was taken the same day that news of Rep. Neal’s hiring was released, so we assume this means Steve Tarvin, who challenged Neal in 2012, will be a candidate. Facebook posts by Tarvin in the past three hours suggest he’s likely to announce for the seat.

“I will need your help in the District 2 House race, It will get started soon. I need you to get everyone you know on board with us as soon as possible. Private message me if you are willing to help. I will return you message as quickly as I get to them. Thanks”

State House District 22 is also vacant upon the death of State Rep. Calvin Hill, for whom a memorial service is being held today. 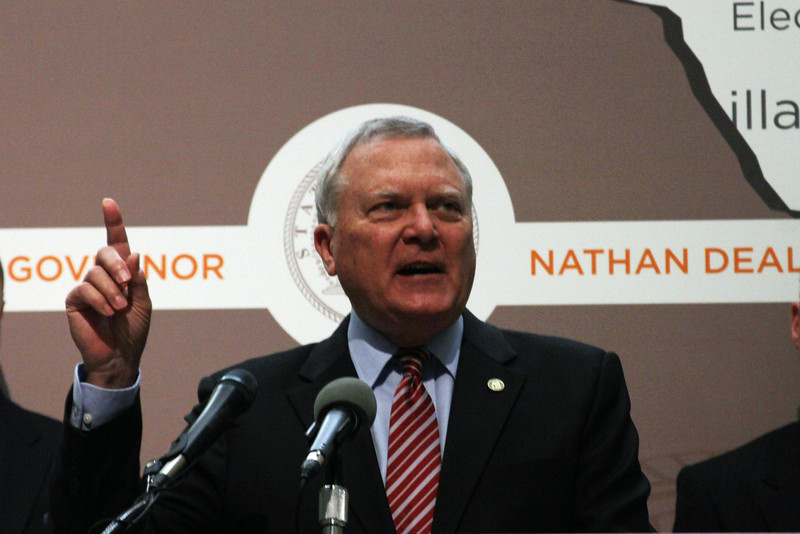 Governor Nathan Deal held a press conference yesterday to which he invited members of the legislature to join him on the podium to announce that Georgia has been named the #1 state for business in the rankings by Site Selection magazine.

“Making Georgia the premier state in the nation for business has been a strategic goal from day one of my administration,” said Deal. “We have worked hard to stay ahead of the curve and anticipate business needs not only today, but in the future. Achieving this national recognition means we are on the right track and reminds us of the importance of continuing to strive for excellence in all we do.”

“Georgia is a regular top finisher in our annual analysis of state business climates, with five Top Ten placements in the last five years,” said Site Selection Editor in Chief Mark Arend. “Executives at companies investing there regularly point to its many logistics advantages, cutting-edge workforce training programs, particularly Quick Start, and proactive economic developers on the state and local levels who understand the business requirements of today’s capital investors.”

The magazine releases its annual rankings each November, bases its research partially on a survey of corporate real estate executives and in part by an index of tax burden criteria according to the Tax Foundation and KPMG’s Location Matters analysis and the states’ performance in Conway Data’s New Plant Database, which tracks new and expanded business facility activity.

Georgia has ranked among the top 10 states in Site Selection’s business climate rankings over the last 10 years, and moves up from No. 4 last year. The Peach State makes frequent appearances on national “Top 10” lists for business, including No. 2 in Area Development’s 2013 rankings and No. 8 in CNBC’s annual rankings.

“Our top-ranking business climate would not be possible without the efforts of our partners across the state who have long worked to position Georgia as a global economic powerhouse,” said Chris Carr, commissioner of the Georgia Department of Economic Development. “Rankings like these serve as a great calling card for site selectors, and then it’s up to us to follow up and give them deeper insight into our vast resources for business.” 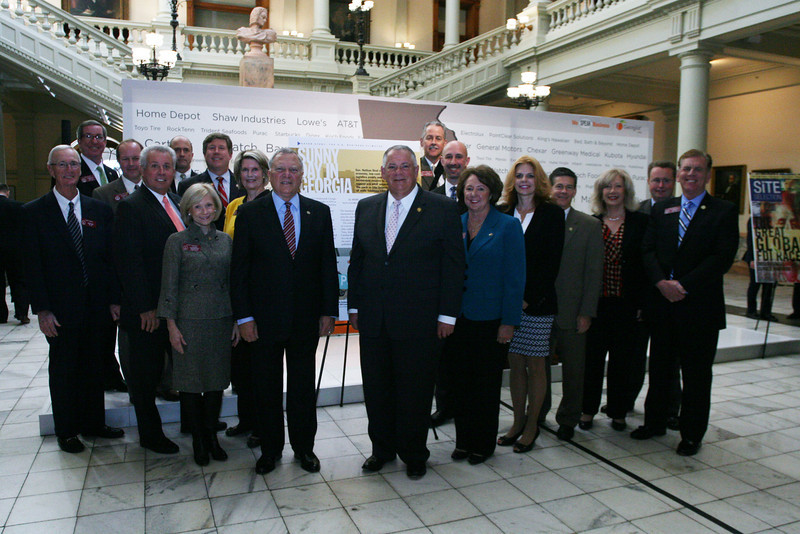 “The best social program has always been a good paying job,” Shafer said. “Our top legislative priority has been to create an environment where business flourishes and business leaders have the confidence to take risks, invest money and create jobs.”

The magazine’s rankings are based on a survey of corporate real estate executives, an index of tax burden criteria according to the Tax Foundation and KPMG’s Location Matters analysis, and performance in Conway Data’s New Plant Database, which tracks new and expanded business facility activity.

“I congratulate the Governor and pledge our continued support for his jobs creation agenda,” Shafer said.

Loeffler not a candidate for Senate 2014

Martha Zoller grabbed the scoop that Kelly Loeffler will not be a candidate for United States Senate in 2014.

The bottom line is the closing for her company’s deal for the stock exchange has been delayed again and she feels she can’t navigate that and run for office effectively, so she’s deferring, for now. Loeffler won’t be running in 2014, but she will be a force to be reckoned with in the Republican Party of Georgia as they seek to maintain their majority and become a more diverse party.  She’s already shown she can raise money and candidates will be vying for her support.

Votes I would cast today

Today, I won’t be voting because none of the incumbents on Brookhaven City Council are being challenged, but if I lived elsewhere, here are the candidates for whom I would be voting.

Senate District 14 – Bruce Thompson – I’ve already voted for Bruce before, as he was the winning candidate for the Republican Leadership for Georgia 2013 Class Vice President. I personally know him to be a man of integrity, a strong conservative and family man, and the kind of successful businessperson whose leadership will help Georgia retain our top ranking for business. He has my highest personal endorsement. Additionally, he is the only candidate in the race endorsed by Georgia Right to Life PAC, and he is also endorsed by Senator Josh McKoon.

One of Thompson’s opponents, Matt Laughridge, should be rejected by the voters of Senate District 14 because his campaign advertising has shown his character and truthfulness lacking.

Sandy Springs City Council – Gabriel Sterling – Despite more than 20 years in the political trenches, Gabriel has not lost his sense of community service. If anything, that experience allows him to know that there is no glory in serving on a City Council, only sacrifice and hard work. He is a credit to the voters who have elected him in the past and will continue to make them proud. My highest personal endorsement.

For Johns Creek Mayor – Bev Miller – for City Council Randall Johnson and Karen Richardson. The allegations against Mayor Mike Bodker are damning enough, but his Nixon-esque dodging, stonewalling and systematic evasion of the Open Records Act make him unfit for office. If an elected official uses a personal cell phone to conduct public business, the records for that cell phone become susceptible to Open Records Act disclosure.

(2) ‘Public record’ means all documents, papers, letters, maps, books, tapes, photographs, computer based or generated information, data, data fields, or similar material prepared and maintained or received by an agency or by a private person or entity in the performance of a service or function for or on behalf of an agency or when such documents have been transferred to a private person or entity by an agency for storage or future governmental use.

Mayor of Warner Robins – Chuck Chalk – I like Chalk mainly because his campaign has shown an innovative approach to problem-solving, which bodes well for how he would serve as Mayor. This is his campaign’s finest moment: 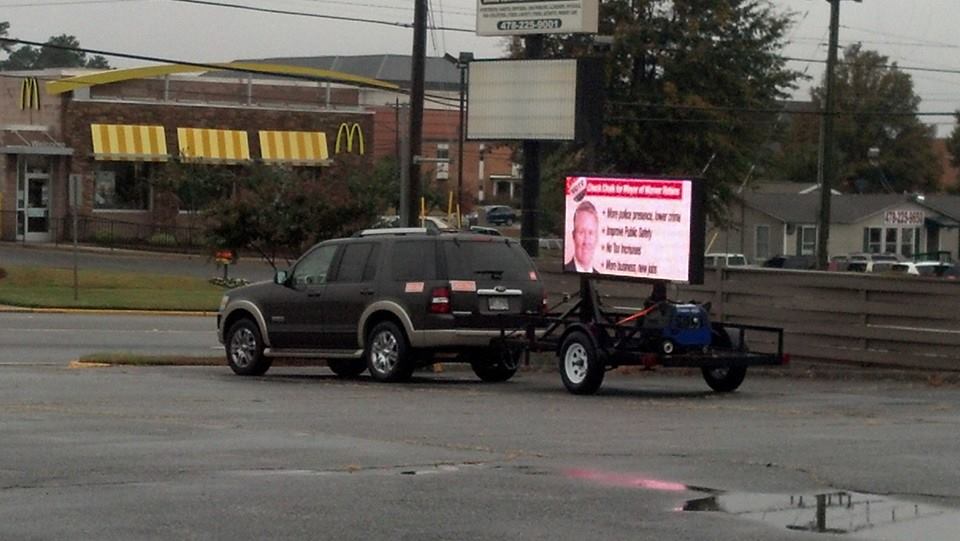 That’s a consumer-grade flat-screen television running a PowerPoint presentation and powered by a generator. Someone who comes up with this idea will come up with great, money-saving ideas as Mayor.
[Disclaimer: The three candidates in Johns Creek and Chuck Chalk either are currently or have been clients of my political consulting practice. I do not work for people I wouldn't vote for.]