1. WRRDA passes US House of Representatives
2. Melvin Everson for Senate? But which one
3. Sabato downgrades GA Senate seat to Leans GOP

Yesterday, the US House of Representatives passed the Water Resources Reform and Development Act (WRRDA) that most importantly to Georgia, will allow the Savannah Harbor Expansion Project to move forward, as it changes the authorized cost of the dredging. Here’s a little bit on what it means from the Savannah Morning News:

Passage by the House in a 417-3 vote means the measure can now go to a conference committee of the House and Senate, and after a final vote in both chambers, can be signed into law by the President.

Language in the bill approving the project’s current cost opens the door for the U.S. Army Corps of Engineers and the State of Georgia to sign an agreement delineating responsibilities and setting a timeline for construction to begin.

Because the state has already set aside its portion of the project, work will not have to wait on federal funds to start deepening the Savannah River channel from 42 to 47 feet.

Congressman Jack Kingston, who has championed the Savannah Harbor Expansion for many years released a statement,

“This is a huge win not just for Georgia but for our entire country,” said Congressman Jack Kingston who sponsored the project when Congress first authorized it in 1999. “While our deep water ports support 352,000 jobs here at home, 75 percent of the 21,000 companies we service are based in other states.  Moreover, completion of the project will free up $231 million in private capital annually that can be invested in business expansion and job creation.”

“In the time the federal government has spent studying this project, China has taken a larger and deeper port from start to finish,” said Kingston.  “We cannot allow this to continue if we want to remain competitive.”

The House’s legislation seeks to prevent future bureaucratic delays by setting hard deadlines on the time and cost of studies, consolidating and eliminating duplicative or unnecessary steps, and streamlining environmental reviews.

Kingston spoke on the floor of the House in favor of the bill:

Congressman Doug Collins posted quotes from every member of the Georgia delegation, which voted unanimously for WRRDA. Here are a couple choice nuggets on what WRRDA means to the rest of the state.

Rep. Rob Woodall (R-GA-7), “The bill is critical to Georgia because it both clears the final hurdles for the Savannah Harbor Expansion Project—arguably the largest economic development and job creation initiative in the State–and by rebuffing attempts by Alabama and Florida to use the bill to hijack the water in Lake Lanier.  Both of these successes mean more job growth in the 7th district of Georgia and that’s good news.”

Rep. Austin Scott (R-GA-8), “This legislation is great news for our state, where Savannah’s port plays a crucial role in our agriculture and manufacturing industries and is a driving force of our local economies.

Rep. Doug Collins(R-GA-9), “This legislation gives Northeast Georgia the freedom to plan for the future of our beautiful lakes as we see fit, and it gets Georgia farm produce out into the markets more efficiently.”

As of yesterday, all four of the new super Post-Panamax cranes, sized to load and unload larger ships that will be calling on Savannah after the Panama Canal expansion, and later the Savannah Harbor expansion, were in operation at the Port of Savannah for the first time.

“Our new cranes, coupled with the pending harbor deepening and superior road and rail connections beyond our gates, mean the Port of Savannah is poised to take advantage of the next evolution in global commerce,” said GPA Executive Director Curtis Foltz.

The first of the new cranes went into service in August, with additional cranes coming online every few weeks. Today, the fourth new super post-Panamax crane begins moving cargo. Each new crane can lift up to 65 tons.

When the deeper Panama Canal opens in 2015, the average vessel calling on the U.S. East Coast is expected to shift from a capacity of 4,500 twenty-foot equivalent container units (TEUs) to approximately 9,000 TEUs. The larger vessels will offer 20 percent to 40 percent savings on shipping costs.

“The four additional ship-to-shore cranes increase our fleet to 27, including nine post-Panamax and 16 super post-Panamax cranes,” said Chief Operating Officer Griff Lynch. “Operating over 9,700 feet of contiguous berth space, the new equipment will mean even faster turn times for the vessels calling on Savannah — generating both time and cost savings for port customers.” 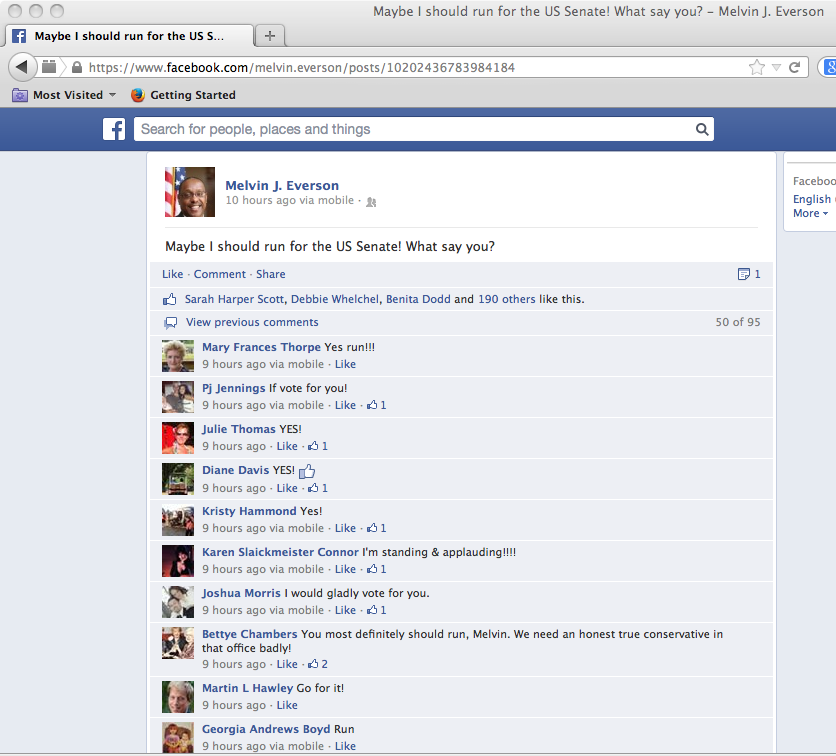 Here’s another thought: how about Melvin Everson for State Senate? I believe he lives in Senate District 9, whose current occupant is under indictment but likely to be casting votes in the Senate chamber next session. Melvin is an accomplished campaigner in the field, one of the best in our state at door-to-door and in front of an audience, though he’s never been the strongest fundraiser.

An Everson candidacy might be the best way out for the folks on the first three floors of the Capitol who are fretting about the possible presence of an indicted Senator on the ballot for the next general election when Gov. Deal and the rest of the statewide offices are up. Folks who are worried about those statewide offices might be willing to lend a hand with fundraising for the right candidate.

A clarification on why Senator Balfour’s suspension, if any, might be very short-lived. Here’s a better explanation from the Fulton County Daily Report:

A deadline in Georgia law may make irrelevant the work of a three-member panel deciding whether to suspend indicted state Sen. Don Balfour from office.

O.C.G.A. § 45-5-6 lifts the suspension of a public official if that official is not tried within the next regular or special court term following the indictment. That means if Balfour isn’t tried by Jan. 3—when the next term of Fulton County Superior Court ends—any suspension would be lifted when the General Assembly reconvenes on Jan. 13.

An alert reader emailed us yesterday that the Terms of Court are set in OCGA §15-6-3.

Larry Sabato’s Crystal Ball argues that the aftermath of the so-called Government Shutdown leaves Democrats in a better position to make gains in Congressional races next year, relying in part on an analysis by Emory University political scientist Alan Abramowitz.

The shutdown kerfuffle has led to a significant improvement in the national political climate for Democrats. The House generic ballot, a national poll that measures whether those surveyed prefer a Democratic or Republican candidate in their local U.S. House race, was generally close over the summer, which was great news for Republicans: According to the Crystal Ball’s Alan Abramowitz, these generic ballot surveys will have to show a double-digit lead for the Democrats around Labor Day next year for them to get within striking distance of picking up the House. But since the shutdown, Democrats are getting closer to the kind of numbers that would put the House in play. The last nine generic ballot surveys listed on HuffPost Pollster as of Wednesday morning read as follows: D+8, D+8, D+7, D+6, D+7, D+10, D+8, D+4 and D+5 — that’s an average lead of seven points.

If the numbers look similar close to Election Day next year, Democrats would be poised for significant gains in the House, and the generic ballot would also indirectly indicate a national sentiment for retained Democratic control of the Senate.

That said, the election is a long ways away, and Democrats would have to net 17 seats to win a majority in the House.

There are a number of factors. With no incumbent in the Georgia contest, the GOP will spend a lot of money figuring out who its nominee will be in 2014. Meanwhile, non-profit executive Michelle Nunn (D) has no competition for the Democratic nomination, and she raised $1.7 million this past quarter, more than all of the Republican contenders save businessman David Perdue (R), though Perdue gave himself $1 million en route to raising $1.8 million. Nunn could very well have more money than her eventual general election opponent, and that individual could be Reps. Paul Broun or Phil Gingrey, each of whom are possibly too conservative and gaffe-prone for even conservative Georgia. Another factor: While we unfortunately do not have 2012 exit polling from Georgia, its demographics have been slowly changing in favor of Democrats, similarly to how Virginia and North Carolina have also been trending Democratic. Georgia remains the least Democratic of the three states, but it should become more open to Democrats over time. Perhaps Nunn — and a poor Republican nominee — will speed along the state’s change.