Sundown begins the Jewish observance of Rosh Hashanah, the beginning of the New Year, which ushers in a traditional period of self-assessment and repentance. Huffington Post has an explanation of the holiday. For most politicians, announcing a run for Governor will be the highlight of their political career – the future, ripe with possibility, stretches out before you and everyone you see speaks seriously of the chance you have to make a difference. For State School Superintendent John Barge, it was a fiasco, ensuring that his political legacy will be a cautionary tale told for at least the next couple election cycles by political operatives.

Yesterday as Barge rolled out his gubernatorial campaign at Smyrna City Hall, someone noticed a misspelling on his website – Govenor instead of Governor. Barge continued on to make it clear that along with spelling, public policy tops the list of things he isn’t any good at. From the AJC

When pushed, though, Barge couldn’t offer many details. When asked what changes were needed to stiffen Georgia’s ethics policy and make government more transparent, for instance, he said: “Have a good leader who was willing to do it.” And when the topic veered from those three E’s, he had even less to say.

“I’m not an expert on that,” he said to a question on healthcare policy. “We’re going to put a panel of experts to look at that issue and see where we go and how we go from there.”

Georgia Public Broadcasting has an interesting take on what Barge’s strategy might be: avoid an embarrassing loss for re-election next year.

[E]xperts say he isn’t likely to use the campaign as a stepping stone to higher office. Instead, they say it’s his way out of a defeat in next year’s race for school superintendent.

Marc Rountree is an Atlanta-based Republican strategist. He says Barge would likely have faced a primary challenge.
“So if he was going to have to face a primary for his re-election, he may as well jump and try to win the bigger prize,” he said in an interview. “I also think he’s depending on other candidates perhaps jumping in the race, each peeling off 5 percent to 10 percent of the votes at a clip.”

Brian Robinson, Deal’s spokesman, gave those numbers a competitive twist.
“I don’t think we can rationally explain their decision to get into this race because the odds are just not there for a challenger in this environment,” he says.

Alas, the possibility of exiting politics without embarrassing himself is gone. +10 points to anyone who sends in a photo of themself with Dr. Barge holding a signing that says, “Barge for Govenor”.

Former state Senator Connie Stokes announced this past weekend at the Democratic Party of Georgia’s coronation of a new Chairman that she will be a candidate for Governor next year. 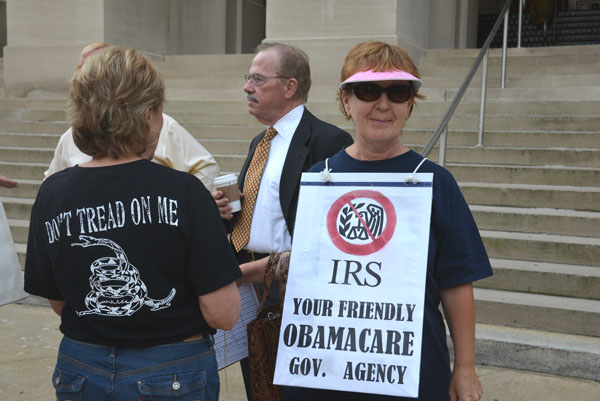 The Atlanta Journal Constitution notes that Senator Johnny Isakson is being pressured by conservatives on the issue of defunding Obamacare.

“If you vote once to defund and then turn around and vote to use our hard-earned taxpayer dollars on this law, you’re voting for and in favor of this law you claim to want to kill and repeal,” she said. “Which is it, Johnny? Are you in favor of or against the law? You cannot have it both ways.”

Isakson said he has voted against authorizing and funding the law many times, and he would like another vote to defund it, just not attached to a must-pass spending bill. He rejected the idea that this fall is lawmakers’ final opportunity to draw a line in the sand before people start enrolling in state-based health insurance exchanges.

“I don’t think it’s the last chance to get rid of Obamacare,” Isakson said. “I think those chances will come because it will crumble under its own weight given the problems (the Centers for Medicare and Medicaid Services) is already having.”

City Council member Elaine Lucas, running for District 3 on the new consolidated government commission wrote a letter asking that voting be halted to allow an outside audit.

Elections Supervisor Jeanetta Watson… said it was a regrettable mistake, but one that occasionally happens when redistricting is involved.

Watson said the 788 voters were incorrectly entered into a new voting system the state has introduced. Bibb County is the first county in Georgia to use the new software, and there have been glitches.

Because of the new map, as well as changes such as new subdivisions opening in Bibb County, Watson said it’s nearly impossible to check to make certain everyone is voting in the right district. She urges voters with questions about their districts to check with her staff before casting a ballot.

Virgil Adams, Bibb County’s attorney, said Friday he has been researching the issue, but he said those votes will likely be counted since there’s no way to go into the system and remove the incorrect votes. And voters can’t vote twice, even if the first votes were cast in the wrong district.

So not only are those 17 voters denied their right to vote on their district commission members, but their votes will count in a district in which they are not supposed to vote. Awesome.

The situation is not much better in Fulton County, but the Elections Board there has six weeks to correct the thousands of voters placed in incorrect districts. From the AJC:

At least four Fulton County cities have discovered thousands of voters in the wrong districts or, in some cases, in the wrong city, The Atlanta Journal-Constitution and Channel 2 Action News have learned. Hundreds more voters could be missing from the rolls altogether.

Unless the voter lists get corrected, ballots could be cast improperly for the wrong council seats, casting doubt on the winners of close races and costing taxpayers tens of thousands of dollars through recounts and costly litigation. Legitimate voters could be told by precinct workers that their names aren’t in their records, creating long lines, forcing them to use paper ballots and requiring them to prove where they live before their votes can be counted.

There’s still time to make necessary fixes, though, as the department faces intense scrutiny from state and county leaders to reverse years of embarrassments. Early voting starts in six weeks, and Fulton will run mayoral and city council elections for Atlanta and nine other cities, plus races for the Atlanta school board.

Fulton, Georgia’s most populous county, was the last to plug into a new statewide voter database that makes redistricting changes. Barron said he wanted to get started working with the cities to make sure the lists are accurate.

But some of the discrepancies discovered by the cities point to wider problems with the county’s messy voter registration database, which a hired consultant criticized last year. Elections expert Gary Smith, in a report to members of the elections oversight board, said cleaning up that data should be the department’s top priority.

This is a potential looming disaster, given the scale of errors in municipal districts – in Sandy Springs, it appears that 6 percent of voters are mis-placed.

The Georgia Public Service Commission voted unanimously to delay consideration of cost increases in the construction of two new nuclear reactors at Plant Vogtle for at least four years until the first new reactor is scheduled to come online. In order to pass additional costs on to consumers, Georgia Power would have to show that the increased expenses were incurred prudently.