Chuck Chalk is running for Mayor of Warner Robins and I didn’t know anything about him until I saw this photo of his campaign wristbands. (Photo courtesy of David Futral).

I checked out the candidate’s website and his Facebook Page and he’s turned it into a visual theme. I like these as for campaign swag and will probably urge a couple candidates to use them.

What I like about them is they’re inexpensive but durable enough to last a couple months. I think folks will talk about them and it will help spread the word about your campaign from your supporters to their friends and acquaintances. I’ve found sources for them priced in the 35-50 cent range. Email me if you’re interested in ordering. I’ll be happy to help a campaign place an order and won’t mark it up if you give me a sample and tell me how they work for you.

With these, as well as most other things I write about, I don’t share everything. There’s still some secret sauce for my clients.

2014 Elections will be here sooner than you think.

Amidst the discussion of whether the Georgia General Assembly will attempt to move next year’s elections to May 20th, I haven’t heard any talk about just how early balloting will start.

Campaign strategists will be waiting to figure out when next year’s elections will actually take place and then figure out how it affect their clients.

I think this makes it all the more likely that some attention will be given to either lifting the restriction on incumbent state office holders raising campaign funds during the session or putting challengers under the same restrictions. It also means for my friends in the lobbying community that legislative fundraising will be front-loaded and you may have to consider changing donations from after the session to before. But as far as I know, the state law restriction on incumbent fundraising does not affect their ability to raise money for a federal campaign.

Speaking of early campaign starts, Kentucky Senator Mitch McConnell is already hammering his Republican primary opponent in direct mail. That election will be held May 20, 2014 as well.

I should note that all of these results came up for the same exact word search. Perdue’s campaign is obviously testing different search strategies, and if they’re doing it right, they’re constantly improving their results while learning about the electorate. The strategy by the Yu campaign is very much a classical political strategy of focusing on a single message and retaining message discipline. Either way, both candidates are getting a lot of free advertising to people who are interested in the Georgia Senate race.

Did I say free advertising? Yes. If done on a pay-per-click basis, it doesn’t cost you anything to show the ad to users – you only pay when someone clicks on the ad to visit your website. Then you get a chance to convert them for an email address or donation.

When it comes to online advertising, I talk to Adsworth Media and suggest you do too. Tell them I sent you.

One of the better accounts I’ve read on the numbers behind the 2014 Georgia Senate General Election comes to us from New Republic. The writer obviously is a liberal Democrat who hopes they can hold the United State Senate, but the numbers appear accurate and it’s a good analysis.

To be clear: Georgia is not a toss-up. The state retains a clear Republican lean in neutral conditions, and the Democratic path to victory is quite narrow with so few persuadable voters. Nunn probably needs the Republicans to blow it. But across the board, Georgia seems like a more winnable state for Democrats than Kentucky.

Consider the difference between the general and run-off Senate elections in 2008, when Chambliss went from a 3 point edge to 15 point rout. Since Georgia’s white vote is pretty “inelastic,” it’s hard to see how a Democratic candidate was going to overcome a 15 point deficit statewide.

But Georgia’s black turnout wasn’t so bad in 2010, despite a bad national climate and without a competitive federal election. According to the Georgia Secretary of State, the black share of the electorate only declined slightly, from 30 percent in 2008 to 28.3 percent in 2010. The white share of the electorate increased from 64.1 to 66.3 percent. That drop-off might hurt a Democratic candidate by a net-3 points, but that’s not the massive gap suggested by the 2008 run-offs. Part of the explanation: turnout was 20 percent higher in 2010 than the 2008 run-offs.

Demographic change helps counter some of the drop-off. The state’s non-white population is booming and, as a result, the white share of the electorate dropped from 64.1 percent in 2008 to 61.4 percent in 2012. A similar decline was observed among registered voters, and that’s continued since November’s election: Between the last election and June 1st, the number of new white voters increased by 20,604, but non-white voters increased by 54,864. As a result of these demographic changes, we would expect the 2014 midterm electorate to be about as diverse as the 2008 general electorate. If 2014 turnout drops off at the same rate that it did in 2010, we might guesstimate that the electorate would be 63.7 percent white, compared to 64.1 percent in 2008 and 66.3 percent in 2010.

Isakson on Veterans’ issues and Port of Savannah

Senator Johnny Isakson spoke to the Paulding Chamber of Commerce Chairman’s Club and among his topics were problems at the Atlanta VA and Port of Savannah harbor deepening.

“I have taken a vested interest in our veterans,” he said.

Isakson said this year about 8,000 veterans will commit suicide.

“Suicide is the largest single problem in the veterans’ health system,” he said.

About one million active duty military members will go to veteran status in the next two years, he noted.

Isakson said the deaths in the hospitals are not acceptable and he is going to work to make sure it does not happen again.

During his speech he spoke about the port of Savannah and how the regulatory process is almost complete to allow deepening of the harbor for ocean-going cargo vessels.

Because of the port, 247,000 jobs have been created in Georgia. When finished, the jobs total should rise to more than 400,000, the senator said.

Also the port is sending out more goods than it brings in, he said.

No such thing as a free lunch?

One of the more interesting tactics I’ve heard of for advocates on either side of the immigration debate will be delivered today.

An unusual alliance of advocates — including Internet moguls and evangelicals, representatives of big business and labor unions — is working across the country during the August congressional recess in an all-out push for immigration reform.

The broad effort, which also includes immigrant rights groups, is using diverse tactics, too. There are roundtables and rallies, sit-ins and voter registration drives, as well as expensive radio and television ads. In Georgia, activists plan to deliver Mexican, Korean and other international food to a congressman’s office Thursday to highlight the many immigrant communities that are part of his district.

Points will be awarded for Congressional staffers who email pics of the food delivery and a short review.

South Georgia farmers are complaining that the DC impasse on immigration reform is affecting their ability to hire field workers.

South Georgia farmers are urging Congress to make a deal on immigration reform.  Many farmers want the federal government to expand and improve a program that provides work visas to migrant workers because they say they simply can’t find enough south Georgians willing to do the work.

Year after year Lewis Taylor Farms hires hundreds of field workers, but nearly all of the local works quit.  Only four workers hired since 2010 still work in the fields.

This Saturday, August 17th, the Floyd County Republican Party will host a free event at Tillman Hangar, Richard B. Russell Airport, including all of the current announced candidates for US Senate in 2014. You can visit the Floyd GOP website for more information and to purchase tickets for a lunch by Duffy’s Deli, or you can R.s.v.p. via their Facebook event page.

On September 26th at 7 PM, the Bryan County Republican Party will host a Coastal Georgia Candidate Forum at the Richmond Hill City Center in J.F. Gregory Park. All declared GOP candidates for U.S. Congress from the First District, U.S. Senate, and local candidates for State House and State Senate have been invited.

Americans for Prosperity Defending the Dream and RightOnline 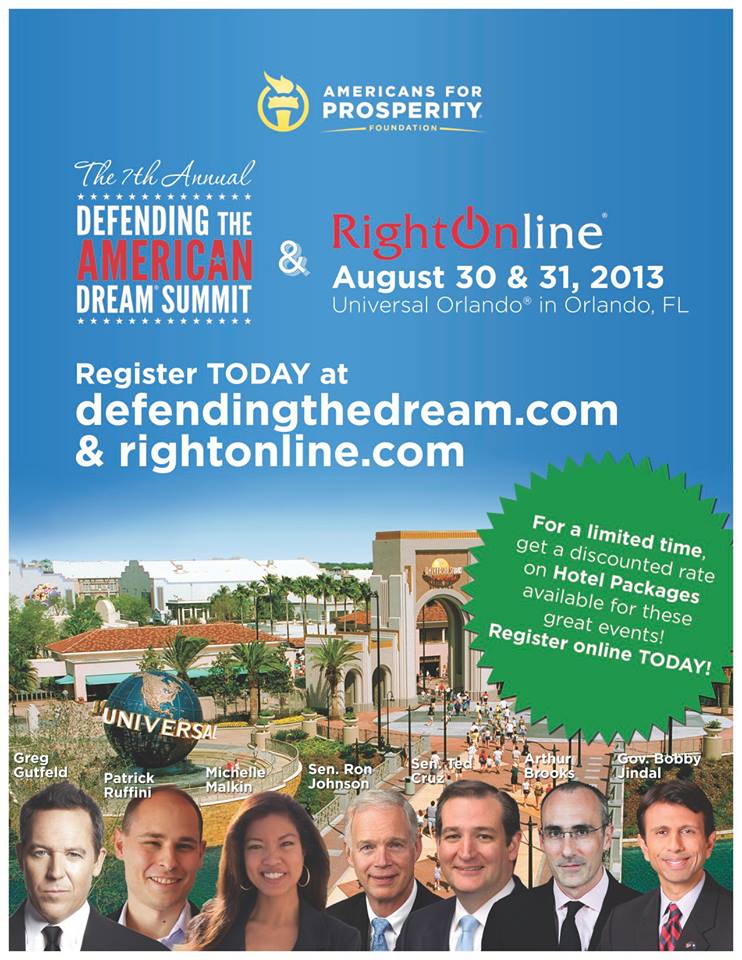 If you’ve been considering attending one or both of these events, now is the time to register. The best deal going gets you transportation, a shared hotel room and admission to one conference of your choice for $150.

A group of exclusively-Democratic politicians from Georgia, Nevada and Iowa has formed a “nonpartisan” group to challenge changes to elections law now that Voting Rights Act pre-clearance is no longer required.

Andre Walker at Georgia Unfiltered has challenged the Fulton County Democrats to prove some of the outrageous claims they’re making up about upcoming Republican-led election law changes.

“Thirty-three states have recently passed or are considering legislation that hinders the right to vote, striking at the very foundation of American democracy. Rightwing opponents of voting rights have mounted an aggressive campaign to swiftly pass bills to turn back the clock on decades of hard-fought progress. Their backward agenda includes changing polling locations at the last minute; changing polling hours; eliminating early-voting days; reducing the number of polling locations; eliminating eligible candidates with specific requirements such as landownership; requiring voters to travel to multiple locations to vote; and even canceling elections.”

Those three sentences from the Fulton County Democratic Party told us what to be afraid of; “rightwing opponents of voting rights.”

So to the Fulton County Democratic Party, I say why don’t you prove it.

Thomas County Chamber of Commerce President Don Sims will retire at the end of next month and has declared his candidacy for Thomasville City Council.

The Macon Telegraph today profiles the candidates for Macon-Bibb Commission District 3. Elaine Lucas has served on the Macon City Council since 1983, with a single stint on the sidelines. Terry Tripp is retired from a tobacco company and has worked as a lobbyist.