How to Skew Up a Poll

We found in our unweighted results that if Michelle Nunn is the Democratic nominee, she starts today in the range of 31.55 to 34.70 percentage points and the major GOP nominees range from 50.47 to 54.26.

This contrasts strikingly with PPP results showing Nunn in the range of 38% to 41% and GOP contenders in the range of 36% to 41%. I said I think my results are closer to correct, and pointed to PPP’s Party Identification numbers showing self-identified Democrats at 38% to Republicans at 39% as suspect. I believe that they weighted their results to arrive a near-parity between the parties.

So I weighted my results to bring them much closer to what PPP believes is the accurate Party mix and here’s what happens. 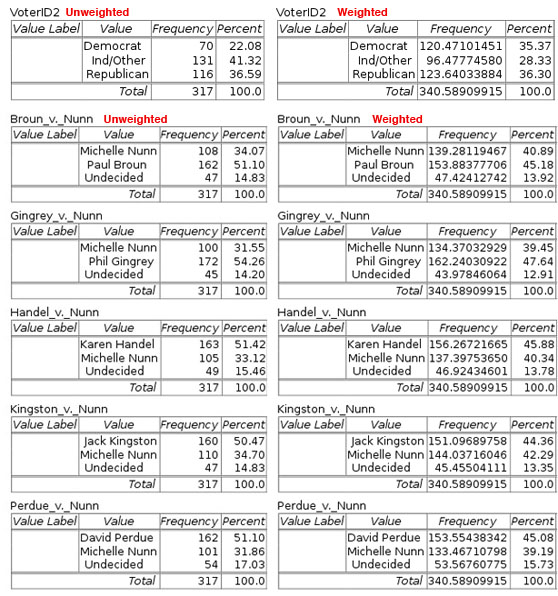 After weighting my results to bring them into line with PPP’s party identification numbers, Michelle Nunn’s strength rises about eight points and now ranges from 39% to 42%, very close to PPP’s 38% to 41%. In the weighted scenario, GOP contenders are now in the 44% to 48% range, closer to PPP’s 36% to 41%.

The Public Policy Polling release on the Georgia Senate poll does not discuss whether weighting is applied, but I believe it was. The difference that weighting makes in results is part of the reason I believe that any polls released publicly should disclose at the very least whether results were weighted, and preferably, which variables were used in modelling the data.

Manipulating poll results on the basis of party identification was the idea behind “Unskewed Polls” in the last cycle, and it does have the effect of changing the outcomes of polling. Done correctly, it can enhance the accuracy of a poll; done with a heavy hand, it can produce whatever results you want it to.

Continuing this week, we’ll see what other polling parameters look likely to have been weighted in the PPP poll and see if we can get our results closer in line to theirs by further weighting. We’ll also discuss other sources of potential error or misleading information.

The takeaway from this is that weighting matters in polling; as consumers, whether political strategists or simply political enthusiasts, we should ask if any sample is weighted and how. If a pollster doesn’t tell you, look first at the party identification numbers and ask if they “look” right.

Here’s an earlier post I wrote on how weighting works.

Republican Martin Sullivan has thrown his hat in the ring for Georgia State House District 166, joining Carl Smith in the GOP Primary. The seat is currently held by Ben Watson, who seeks an upgrade to the State Senate. Of course he has a Facebook page for his campaign and a campaign website. If you’ve spent any time around the Capitol or at GOP events the last four years, you’ve probably met or at least seen Martin. He worked for about four years for Agriculture Commissioner Gary Black, serving as Political Director of the campaign, then transitioning into the department. The campaign kickoff will be Thursday at Lake Mayer at 11 AM.

In my hometown of Brookhaven, Ga, City Council member Joe Gebbia is running for reelection, while his colleague Jim Eyre is still considering whether to run.

Jason Pye has a chat with Rep. Paul Broun about Obamacare. From the interview:

“I talk to employer after employer that tells me that they’re just sitting tight trying to figure out what to do about it because they don’t know how to operate their business under this threat of ObamaCare. What is happening is employers who need to hire new people are not doing so because of ObamaCare.”

During a discussion last week with United Liberty, Broun explained that that he has re-introduced the Patient Option Act, a consumer-driven healthcare proposal that presents a stark contrast between the top-down approach currently being implemented by Obama Administration.

“What it is is a patient-centered market-based healthcare plan that will totally reform healthcare finance. The new version is going to totally get the government out of making healthcare decisions for anybody,” Broun said of the Patient Option Act. “What it will do is it will make healthcare cheaper for everybody, it’s going to provide coverage for all Americans, and it’s going to save Medicare from going broke.”

ObamaCare was never about making healthcare more consumer-friendly, which is why Broun said that President Barack Obama didn’t take seriously input from Republicans during the 2009/2010 healthcare reform debate.

The Gwinnett County Commission is expected to vote later this month to place a referendum on the November ballot for a three-year SPLOST. From the Gwinnett Daily News:

Gwinnett officials have proposed that 70 percent of a three-year sales tax program be devoted to transportation.

While parks and recreation has received up to a 40 percent of the proceeds in the early 2000s, this proposal would limit the funds to 7.5 percent, less than $30 million, likely devoted to renovations and expansions rather than new parks. Another small piece, about 1.5 percent, has been designated for senior facilities.

NY Times has Georgia on their mind

[I]n the Deep South, where the median cost of a new high school is $38.5 million, it might as well be the Taj Mahal.

As a result, some in this antigovernment, tax-sensitive part of the country are grumbling, especially since the project was $50 million over its original budget.

“The raw numbers themselves in terms of the cost of construction should give pause to any taxpayer,” said Edward Lindsey, a lawyer and a Republican member of the Georgia House of Representatives.

But for the Atlanta Public Schools, which are just beginning to recover from a cheating scandal that in March brought indictments against 35 educators, including a former superintendent, the shining new school is being pitched as an important step toward redemption.

Some of the 1,400 students who will attend the school this year come from the wealthiest families in the region, but others, Mr. Taylor said, are homeless. Nearly half are black. About 27 percent are white and 20 percent are Hispanic. They speak more than 40 languages.

“If there was ever a model for an urban high school, this is it,” he said.

The goal is to move the school from its graduation rate of about 61 percent — a rate so low it helped lead to the ouster of top administrators last fall — to 90 percent.

The cost seems fine to some parents, who say that Buckhead residents live in one of the wealthiest ZIP codes in the South and many pay plenty in taxes.

“This is a nice gift to the Buckhead area from the state of Georgia for all the money we send them,” said Jennifer Salberg-Kopelman, whose daughter will be entering the 11th grade.

And today, D.A. King appears in an article about his ongoing fight against illegal immigration.

D. A. King, who quit his job as an insurance agent a decade ago to wage a full-time campaign against illegal immigration in Georgia, is one reason this state rivals Arizona for the toughest legal crackdown in the country. With his Southern manners and seersucker jackets, he works the halls of the gold-domed statehouse, familiar to all, polite and uncompromising.

The zeal of militants like Mr. King is a problem for the House speaker, John A. Boehner of Ohio, and other Republican leaders, who are hoping to steer their divided caucus to pass a House version of legislation to fix the broken immigration system, which could include legal status for those who lack it — though probably not citizenship.

The mistrust of Mr. Boehner among Mr. King and his allies deepened recently when the speaker rebuked an anti-amnesty hero, Representative Steve King, Republican of Iowa, for commenting that young immigrants here illegally had “calves the size of cantaloupes” from running drugs across the border.

Mr. King in Georgia said he sided squarely with the congressman of the same name, although he might have chosen a milder metaphor. He nonetheless spared little in his description of Senator Marco Rubio, the Florida Republican who was one of the authors of the Senate bill, calling him a “smarmy and dishonest” turncoat. During the Senate debate, Mr. King designed and paid for thousands of bumper stickers as well as three large billboards along a commuter highway near Atlanta.

“Help us stop RubiObama amnesty!” one big sign read, with President Obama’s name joined by his hallmark red-white-and-blue letter to that of Senator Rubio.

His billboards instructed drivers to call a senator from Georgia, Johnny Isakson. Mr. Isakson, who supported a comprehensive bill in 2007, voted against the Senate legislation this year.