A federal judge has issued an injunction setting the 2014-15 Georgia election calendar without input from the Georgia General Assembly.

Click here for a copy of the order in .pdf format.

Here’s the new schedule for federal elections – Congress and the United States Senate. State law will still set the dates for state elections, but the General Assembly is unlikely to adopt two different election schedules, which would confuse voters, depress turnout in some elections, and cost state and local governments significant amounts of money.

The calendar change, which currently affects federal contests only, also expands the primary runoff period from three weeks to more than two months – which could substantially increase the cost of running, particularly for four Republicans now in next year’s Senate contest.

A long run-off period eating up GOP resources and increasing rancor could also create an opportunity for a Democratic candidate in that same race. Branko Radulovacki, a metro Atlanta physician, has already announced. Michelle Nunn, daughter of the former U.S. senator, is still considering her candidacy.

The new primary date could also greatly change the make-up of next year’s primary, which will be held only a few days after most school systems dismiss their students for the year. July turnouts are notoriously low, and often dominated by party activists, in part because so many Georgians take vacations during that month.

The federal lawsuit specifically revolves around Georgia’s insistence on runoff elections in primary and general election contests, requiring victors to receive 50 percent plus one vote. Runoffs in Georgia currently occur three weeks after the first vote. But federal law requires a 45-day waiting period, so that ballots can flow to and from overseas military outposts, and to other Americans living overseas.

U.S. Rep. Jack Kingston will be sitting on $2.3 million for the 2014 Senate election, having raised $800,000 this quarter, according to Georgia Tipsheet. Politico reports that Kingston was the top Congressional recipient of contributions from the defense industry, with Democrat John Barrow (#9) the only other Georgian in the top ten.

Kingston, a fiscal conservative who serves on the House Appropriations Defense Subcommittee, faces a crowded GOP primary. His PAC has drawn $65,000 this election cycle from top defense firms, signaling that the industry prefers him to a far-right challenger.

“We’ve been aggressively fundraising early in the cycle,” Kingston told POLITICO. “I think that they are interested in my candidacy because they believe that I am pro-military and I have four installations in my district.” 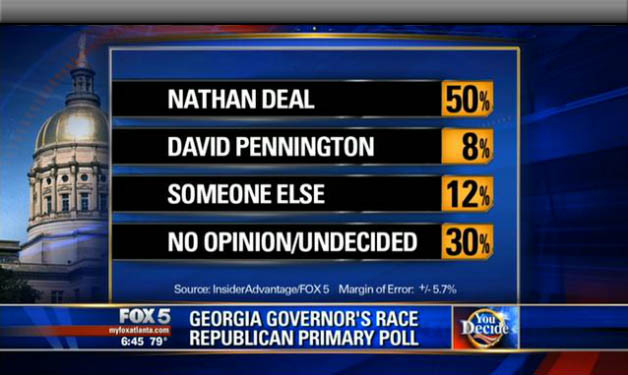 A poll for Fox5Atlanta and Morris News by InsiderAdvantage shows Governor Nathan Deal at the magic 50% mark for his reelection next year, with GOP challenger Dalton Mayor David Pennington at 8%. InsiderAdvantage CEO Matt Towery said, “That’s pretty much a you-have-to-blow-it scenario for Deal.”

The poll also included a question about the Senate race:

The four announced Republican hopefuls for the U.S. Senate are essentially tied when considering the margin of error, and one exploratory candidate, political newcomer David Perdue, has 5 percent.

Congressmen Jack Kingston at 17 percent, Phil Gingrey at 15, and Paul Broun with 11 are splitting the vote so far with former Secretary of State Karen Handel, who has 13 percent. The remaining 39 percent are undecided or support another candidate.

Towery said the candidates are effectively on equal footing.

“The ones who get on TV the earliest, if they have an effective message, they will get a lead, and it’ll be hard for the others to catch up,” he said.

If David Pennington qualifies for Governor, the City of Dalton will spend between $6000 and $122,000 to hold a special election for the remainder of his term, which runs through 2015.

The Georgia Public Service Commission voted yesterday to add 525 megawatts of new solar to the state’s largest electric utility’s generation portfolio. An amendment to the initial motion ensures that the additional solar will not “put upward pressure on rates,” a fancy way of saying that the new solar won’t cause higher rates.

Here’s the most important part, which the Atlanta Journal-Constitution, Georgia Public Broadcasting, and WABE all missed.

The third part of an amendment offered by Commissioner Stan Wise read:

3) No bid shall be accepted which exceeds Georgia Power’s projected levelized avoided cost for the term of the PPA. Such avoided costs will be established and announced by GPC and reviewed by the Commission prior to the RFP process. In establishing the avoided cost, Georgia Power shall use the most recently available information to ensure that the additional solar shall not put any upward pressure on rates.

“Avoided cost” is the term used to describe the saving from, for example, buying solar power at a lower cost than a utility could produce the power using its own facilities. The amendment means that solar will be used under the plan approved by the Commission only where it is the least expensive means of providing power, and this amendment ensures that solar power will not be subsidized when used under the plan.

Former State House Democratic Leader Dubose Porter announced he will run for Chair of the Democratic Party of Georgia. For better or worse, he probably is completely unelectable in a party whose electorate is majority African-American and includes a strong contingent of gay rights activists.

Andre Walker of Georgia Unfiltered pretty much torpedoed any change Porter has of being elected with two posts. First, Andre noted that Porter voted twice in the State House to ban gay marriage.

DuBose Porter, former House Democratic Leader and former House Speaker Pro Tempore, voted twice to ban gay marriage in the state of Georgia.
During his 2010 gubernatorial campaign, Porter was asked if he would seek to overturn the constitutional amendment outlawing same-sex marriages. Porter responded in the negative. The Georgia Voice, another GLBT publication, said then that the “Governor’s race offers little positive for gay voters.”
“None of the candidates to be Georgia’s next governor have campaigned for LGBT votes, although several have long —mostly negative— records on LGBT issues,” the Georgia Voice article reads.

Then, Andre also wrote that Porter introduced legislation to fly the 1956 Georgia flag, which features the Confederate battle flag, over the State Capitol twice per year.

The NAACP threatened economic boycotts if the 1956 Georgia state flag was not replaced; and in 2001, after intense lobbying from the [NAACP], the state legislature changed Georgia’s flag.
Three years later, DuBose Porter sponsored a bill to designate the 1956 Georgia flag, complete with its Confederate battle emblem, as the “Georgia Memorial Flag.”
Porter, who served in the state House from 1983 to 2010, put his name by House Resolution 1442. In addition to identifying the 1956 flag as the “Georgia Memorial Flag,” H.R. 1442 also required the flag be flown over the state capitol building on Confederate Memorial Day and Robert E. Lee’s birthday.

In Georgia, blacks make up a majority of Democratic primary voters. A 2005 Mason-Dixon poll conducted in said 71% of blacks in Georgia viewed the Confederate flag as a symbol of racism.

Saturday, July 13, 2013 beginning at 4 PM, the Third District Georgia Republican Party will meet at the Bailey-Tebault House, which is located at 633 Meriwether Street Griffin, GA 30224. The meeting itself is expected to last until 5 PM at which time it will segue into the Spalding County Republican Party Low Country Boil. The cost for the low country boil is $25 per person or $45 per couple and tickets may be purchased online. 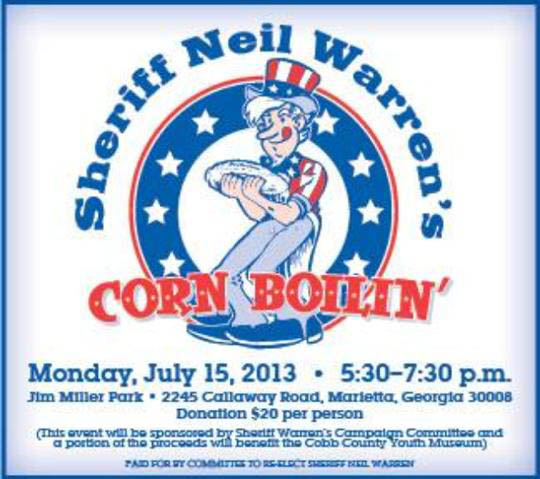