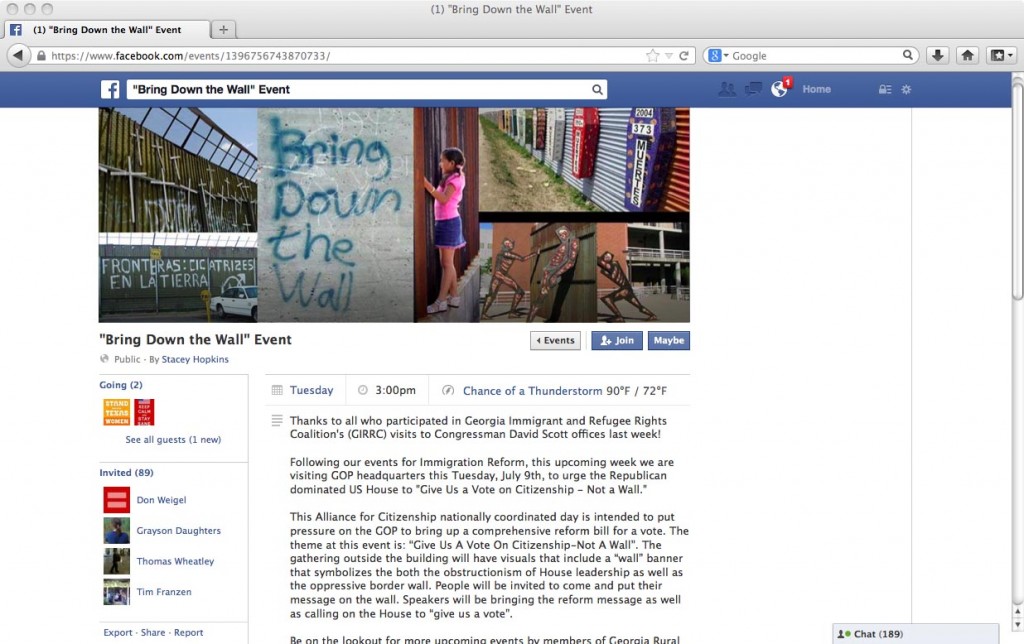 Looks like some folks are planning a pro-Immigration Protest event at the Georgia Republican Party Headquarters on Tuesday at 3 PM. From the Facebook Event page:

Thanks to all who participated in Georgia Immigrant and Refugee Rights Coalition’s (GIRRC) visits to Congressman David Scott offices last week!

Following our events for Immigration Reform, this upcoming week we are visiting GOP headquarters this Tuesday, July 9th, to urge the Republican dominated US House to “Give Us a Vote on Citizenship – Not a Wall.”

This Alliance for Citizenship nationally coordinated day is intended to put pressure on the GOP to bring up a comprehensive reform bill for a vote. The theme at this event is: “Give Us A Vote On Citizenship-Not A Wall”. The gathering outside the building will have visuals that include a “wall” banner that symbolizes the both the obstructionism of House leadership as well as the oppressive border wall. People will be invited to come and put their message on the wall. Speakers will be bringing the reform message as well as calling on the House to “give us a vote”.

Be on the lookout for more upcoming events by members of Georgia Rural Urban Summit and Georgia Immigrant and Refugee Coalition (GIRRC) throughout the state, updates and visits to Congress members.

Let’s make sure Georgia Republicans know there’s a strong group of residents who want a vote on comprehensive immigration reform – give us a vote and bring down the wall!