As Delegates prepare for the Georgia Republican State Convention today and tomorrow, former Secretary of State Karen Handel announced this morning that she is running for United States Senate in 2014. From her announcement, via Jim Galloway’s Political Insider:

“I have been incredibly fortunate and blessed in my life.  Only in America could I have the life I have.  I’m running for U.S. Senate because I want to make sure that the next young person who ends up on his or her own at 17 will have the opportunity to prosper and achieve.  But that won’t happen unless we make some big changes in Washington.

“Georgians want a conservative Senator with the courage to take on the status quo, to fight for them and our constitutional ideals, to be accountable to them — and not Washington.”

Lori Geary with WSB-TV has an exclusive interview with Handel:

“I think one of the great advantages I will have in this race is that I really am battle-tested. I had a lot thrown at me and I’m still standing. I feel very confident about that and confident going forward. Primaries are meant to be tough,” Handel told Geary.

Handel said her decision to run for Senate moved forward when Rep. Tom Price decided not to run. She calls him not only a political ally but a friend, so there was never a scenario in which either of them would run against each other.

Handel told Geary, she knows raising money in a race this huge won’t be easy.

“It’s no secret, I’m not going to be the top money raiser. I never have been. In any single race I’ve ever been in, I’ve never been at the top of the leader board in fundraising but I’m at the top of the leader board when it comes to grass roots support and the votes and that’s what ultimately matters. I’ll have the money I need to do what I need to do to win this primary and to be the United States Senator from my great state,” Handel told Geary.

Ray Henry with the Associated Press has this analysis:

In the Republican primary for the U.S. Senate seat, some of the very same issues [from the 2010 Gubernatorial primary] could resurface. Handel will likely seek to portray herself as someone outside of Washington politics willing to tackle tough issues. Meanwhile, Kingston has been emphasizing his conservative credentials and fiscal stewardship as a member of the House Appropriations Committee. Gingrey and Broun are also conservatives looking to connect with popular grassroots organizations around the state.

It appears Handel will not have the benefit of support from former Gov. Sonny Perdue, a mentor of hers over the years. Handel briefly served as Perdue’s deputy chief of staff before leaving the administration to run for chairman of the Fulton County Commission, a race she won. This time, Perdue has announced support for his cousin, David Perdue, the former CEO of Dollar General and Reebok and a Republican who has announced he’s formed an exploratory bid for the U.S. Senate race.

We happened to run a poll last night of the Senate field, including Handel and businessman David Perdue, who is exploring via GoogleAds the viability of a candidacy for Senate.

To no one’s surprise, the Congressional candidates are clustered in the mid-teens, along with Handel; Perdue is in single digits.

Call it a wide-open race and we’re so far out we can’t even see into the first turn. In fact, our tires aren’t even warm yet, but we know that two of the candidates have significantly more fuel than the others.

In the same poll, we asked about whether Georgians approve of the way Governor Deal is handling the task of bringing new jobs to the Peach State.

Among all respondents, 64.98% of respondents answered that they approve, versus 17.97% who disapprove and 17.05% who are undecided. It was among self-identified “very likely” voters for the 2014 GOP Primary that Deal’s lead opened from “substantial” to “insurmountable,” with 73.04% of those respondents approving.

State Senator Buddy Carter released a poll of the 2014 Republican Primary in the First Congressional District race to replace Congressman Jack Kingston, showing that “Undecided” leads there as well.

[T]he Buddy Carter campaign released its first internal poll. Nor was it much of a shock that the poll _ actually put in the field before any candidate had formally announced _ shed a favorable light on the candidacy of the state senator from Pooler. Afterall, campaigns aren’t in the habit of releasing polls whose results are bad news.

The results show 30.8 percent of the poll’s respondents would go for Buddy Carter. Chapman was second with 21.7 percent and Schwarz received 5.9 percent. As we mentioned above, undecided carried the day at 41.6 percent.
There was the little matter that “Undecided” polled at 41.6 percent in the ballot test – far better than any of the then-potential candidates.

At the Georgia GOP Presidents Day Dinner back in March, former Congressman Mac Collins told a table “There’s gonna be a Collins on the ballot in the Tenth Congressional District, we just haven’t decided which one.”

Yesterday, his son Mike Collins announced that he would be the Collins on the ballot.

Mike Collins said, “My father taught me about public service, but more importantly he taught me the values of hard work and getting the job done.  My first job was sweeping the floors in the truck garage for a dollar an hour.  Now we ship millions of metric tons throughout the U.S. each year.”

Collins says his motivation for running for Congress is a desire to fix government.  “I will be a strong voice for our conservative values in Congress.  Government is out-of-control.  It over-regulates and wastes money.  The red tape and bureaucracy are strangling business.  I’ll put my twenty years of business and managerial experience to work for the people of central Georgia” said Collins.

Here’s a photo of the announcement sent in by a GaPundit reader. 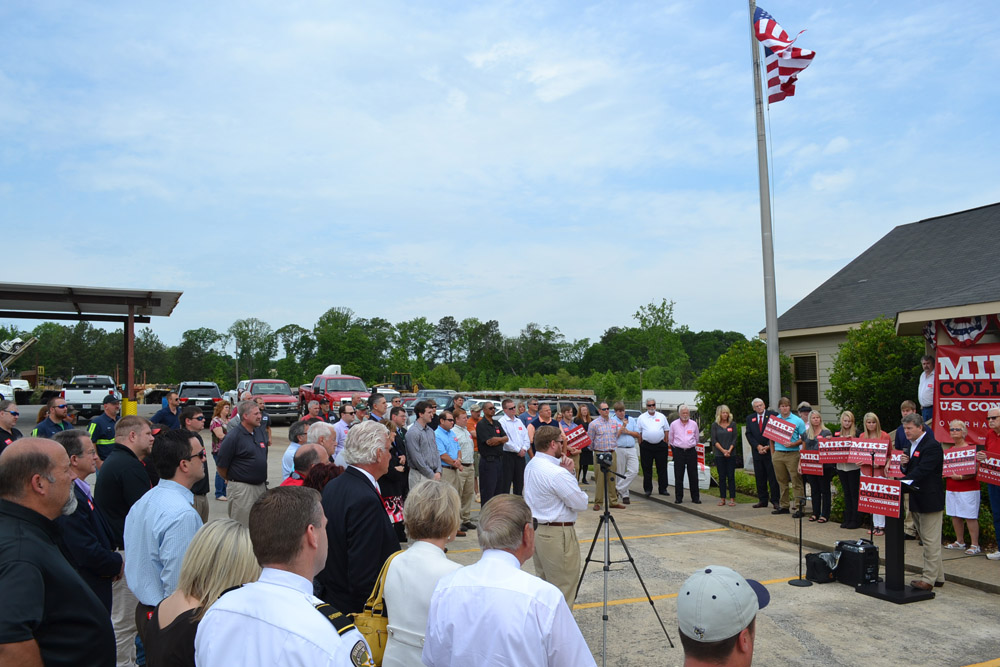 Our email inbox tells us that David Pennington will host a reception tonight at the Classic Center in High Shoals 1 from 5:30-7:00 PM and 9-10 PM.

A Federal grandy jury indicted Democratic State Rep. Tyrone Brooks, charging him with two fraud schemes to embezzle money donated to Universal Humanities, a charity he founded in 1990, and the Georgia Association of Black Elected Officials (GABEO). From the Atlanta Business Chronicle:

The indictment charges two fraud schemes, the first involving a tax-exempt charity, Universal Humanities, Inc., that Brooks established in the early 1990s. From at least 1995 through 2012, Brooks solicited contributions for Universal Humanities from corporate and individual donors purportedly to combat illiteracy in disadvantaged communities in Georgia and across the southeastern United States, eventually raising more than $780,000. Donors included the Coca-Cola Company ($400,000), Georgia Pacific Company ($140,000), Northside Hospital ($240,000), and others who gave smaller amounts.

The indictment alleges that in reality, Brooks did not use the donations to promote and address literacy in Georgia or elsewhere, or to retain a staff, occupy office space, fund workshops, hire instructors, or conduct programs attended by students. Instead, Brooks used the money to pay personal expenses for himself and members of his family, including home repairs, furniture, lawn service, life insurance, entertainment, personal credit card expenses, utility bills, food and clothing, dry cleaning, electronic equipment, jewelry, and payments on personal loans, among other personal expenses.

A second related scheme charged in the indictment alleges that Brooks also diverted charitable donations he solicited on behalf of GABEO and used much of the money to pay personal expenses for himself and his family. GABEO is an organization of state, county, and municipal elected officials that promotes voter registration, crime prevention, literacy and economic empowerment initiatives.

The location of a planned press conference to address the charges and his earlier statements suggest that Brooks will not go quietly. From the new AJC paysite, behind the paywall:

Brooks, first elected to the state House in 1980, said he will give a statement soon at the Moore’s Ford Bridge in Monroe, where two young black couples were lynched in 1946.

In February, when The Atlanta Journal-Constitution first reported the FBI was investigating Brooks, the lawmaker said he believed the probe was being stirred up because of the attention he and the Georgia Association of Black Elected Officials were giving the unsolved murders.

At a Feb. 5 news conference at the Capitol, Brooks said if he had not been pressing the FBI to charge those who were responsible for the lynchings, “I would not be standing here with you today.”

If the Democratic State Convention were being held today (and if we had any intention of attending), “lynching” or “high-tech lynching” would appear on the Buzzword Bingo card.

Taking a page from the Washington, DC Democratic playbook that saw the IRS targeting conservative groups, Fulton County Tax Commissioner Arthur Ferdinand is targeting Republican County Commissioner Liz Hausmann, who had the temerity to suggest that the purchase of a nearly $40k SUV for Ferdinand’s personal vehicle might be inappropriate.

Just like the Washington shenanigans, it appears that Ferdinand has not targeted liberals, even though Democratic County Commission Chair John Eaves suggested Ferdinand return the SUV.

We offered each of the candidates for GAGOP Chair an opportunity to reach our readers, but after the blitz of candidate emails, robocalls, , I can’t bear to think about the election any more.

But if you’re a glutton for information overload, here’s what they have to say about themselves, in reverse-alphabetical order.

The Race for the GA GOP: Meet BJ Van Gundy

The Race for the GA GOP: Meet John Padgett

The Race for the GA GOP: Meet Alex Johnson

The Race for the GA GOP: Meet Seth Harp