Georgia Politics, Campaigns & Elections for May 7, 2013

Georgia Politics, Campaigns & Elections for May 7, 2013 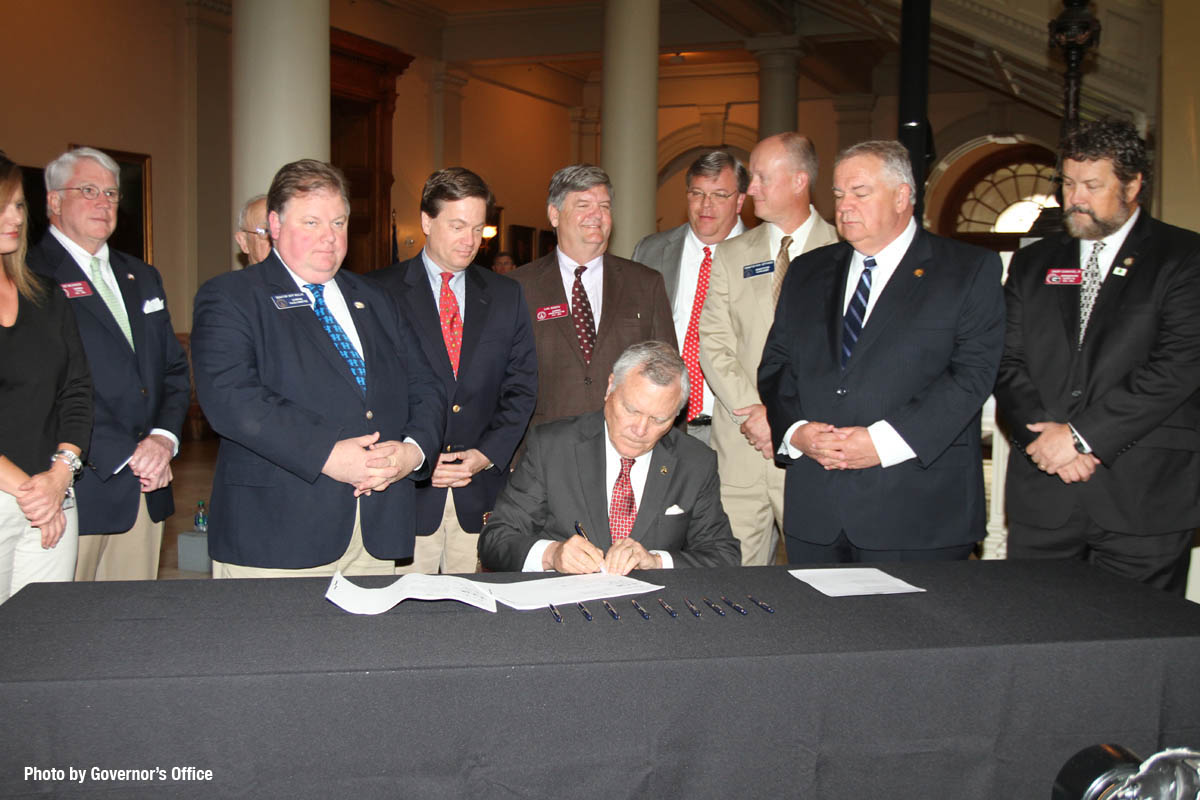 “I have enacted these bills to strengthen ethics laws in our state because the public demanded it and good government longed for it,” said Deal. “Our success as leaders of Georgia depends heavily on the public’s ability to trust us. Georgians are correct to insist that the voices of the people echo louder under the Gold Dome than the narrow views of special interests. Together, these bills constitute a major step in improving ethics, trust and transparency in our state.”

House Bill 142 restores rulemaking powers to the Georgia Government Transparency and Campaign Finance Commission, expands the definition of lobbyists to include more individuals, and caps lobbyist spending on elected officials.

House Bill 143 reverses a change made several years ago to require some local elected officials to once again file campaign disclosure reports locally, rather than with the state government, and requires an additional campaign disclosure filing to require disclosure by legislators of donations received in the first days of the year before the legislative session.

The bill focuses on industries like Gulfstream, which has a manufacturing facility in Savannah, but it will reach throughout the state, Atwood said.

He cited Stambaugh Aviation, which refits and maintains Boeing jets at the Brunswick airport, but said that when hearings were held on the bill, witnesses came from the Atlanta area, Augusta and other cities to speak in favor of it. The bill is necessary because it would be too easy to simply fly the aircraft to competing states like South Carolina, Florida and Alabama to save money on expensive parts, Atwood said.

“When you’re looking at large aircraft, it doesn’t take them long to move them,” he said.

Not only is the industry clean, he noted, the average worker is paid $64,000 a year.

Remaining unsigned at this point? The FY 2014 “Big Budget.” But rest assured, it’s almost certain Gov. Deal will sign it tomorrow, the last day to sign legislation passed during the 2013 Session of the Georgia General Assembly.

With state Senator Buddy Carter’s entry into the race for the First Congressional District seat currently held by Jack Kingston, speculation has turned to who will run for Carter’s Senate seat and the races those will touch off, as well as who will run against Carter. According to the Savannah Morning News

Savannah resident David Schwarz, a former Kingston staffer and now the managing partner of the lobbying and economic development consulting firm of Pier Strategies, said Wednesday he has formed an exploratory committee to help him decide whether to run.

Jeff Chapman, the current state representative from Brunswick who resigned from the state Senate in 2010 to mount a failed bid for governor, also has been mentioned.

Darwin Carter, an Alma native who failed in bids for state agriculture commissioner in 2010 and the state House of Representatives in 2012, has announced he will run for Kingston’s seat. To date, neither Chapman nor Darwin Carter has filed with the FEC.

Simons said the initial poll by the Budddy Carter organization, unverified by any objective polling, shows the state senator with a double-digit lead over the rest of the field of prospective candidates.

Buddy Carter’s pursuit of Kingston’s congressional seat would open up his state senate seat, and state Rep. Ben Watson confirmed Wednesday he will run for the state’s upper chamber if the Pooler Republican vacates the seat.

“If the dominos do fall, I will run for state senate,’ Watson said. “If Buddy doesn’t decide to run, I’ll be happy to stay in the House where I am, where I’m very comfortable.”

Roll Call adds John McCallum, who previously worked for then-Congressman Newt Gingrich and ran for Secretary of State in 1998, losing to Democrat Cathy Cox. Also considering a run according to Roll Call is Stephen Meeks, a former staffer to Saxby Chambliss.

Republican National Committeeman from Georgia Randy Evans has a writeup on the recent RNC meeting in Los Angeles.

On Wednesday April 10, various committees met to prepare reports for the body to adopt. These meeting included the Budget Committee, Rules Committee, and Resolutions Committee. The budget committee was asked to propose an amended budget to move $8.3 million from an anticipated year end surplus of $16 million over to field operations. This would ensure that Chairman Reince Priebus’ plan to spend an additional $10 million a year on national field offices and staff is fully funded.

In the afternoon, there was a several hour meeting that afternoon of the Rules Committee to consider major changes to the RNC rules. Virginia National Committeeman Morton Blackwell raised issues arising out of the RNC rules adopted at the 2012 Republican National Convention. Specifically, Rule 16(a)(2) was considered by most as anti-grass roots.

“Republican Secretaries of State serve on the front lines to ensure free and fair elections, work with candidates to meet the qualification requirements to run for office and perform important economic duties in their states,” said RSLC President Chris Jankowski. “I commend Secretary Brian Kemp for his leadership, and look forward to working with the executive committee to expand the number of Republicans holding these important offices.”

The Georgia Election Officials’ Association is meeting this week in Savannah to discuss how to handle ethics filings that will be made locally now instead of at the state, among other topics.

While statewide and legislative candidates must still file electronically with the state, the new law beginning in January returns responsibility for receiving local candidate reports to officials such as county election supervisors or city clerks.

Russell Bridges, Chatham County’s elections supervisor, said his office like others will have to wait and see what develops.

The need for more funding is something Kemp said he often hears from local elections officials as he travels around the state. His own department’s budget is down 30 percent since 2008, and its staff has been cut by 40 percent, he said.

“Quite honestly that sometimes affects our customer service,” Kemp said.

President Barack Obama has frequently mentioned his intent to tackle long poll lines in his second-term administration. A Pew study released in February found that at 37 minutes, Georgia followed only South Carolina in the nation’s longest wait times in 2008.

“Senator Hill brings extensive expertise in developing free market healthcare solutions for the people of Georgia,” said Ron Scheberle, Executive Director of the American Legislative Exchange Council. “His healthcare legislation has become a model for legislators around the country, and his leadership will be a tremendous asset to our organization.”

As a five-term State Senator, Hill has served as the chair of the Georgia Finance Committee and as a member of the Government Oversight and Judiciary Committees. As a member of the Georgia Health and Human Services Committee, he authored and successfully passed the nation’s first patient-centered, prevention-focused, free market reform legislation which made healthcare and insurance more affordable for Georgia’s working families.

“My strong commitment to the American Legislative Exchange Council is due to the nonprofit’s significant impact and the opportunities it creates for the exchange of ideas,” said Hill. “I’m honored to help lead the Health and Human Services Task Force and glad to have the opportunity to explore free market healthcare solutions with other legislators from across America.”

There was no debate and very little disagreement when the four candidates for the post of chairman of the Georgia Republican state committee met Saturday afternoon at the Coastal Georgia Center near downtown Savannah.

Sponsored by the Georgia Republican Assembly and hosted by the Chatham County Republican Party, the event, which drew about 65 observers on the rainy weekend afternoon, was billed as a debate.

It was hardly that. It was more akin to a candidates’ forum where the participants are allowed to speak unchallenged. Even then there wasn’t much to challenge.

Instead of highlighting any difference between the four men, the event underscored the similarities of how the candidates said they would administer the office, raise funds, communicate with grass-roots organizers on the county level, recruit new blood to the party and engage with state legislators and Gov. Nathan Deal.

While it is widely assumed that green energy always costs more, the April 22 announcement that Georgia Power Co. will import 250 megawatts of wind energy from Oklahoma by 2016 is a good signal that clean energy can beat out fossil fuels on a cost basis.

As a former state lawmaker and a member of the Green Chamber of Commerce Board, I have worked for years to bring new economic opportunities to Georgia, including the growing clean energy industry. That’s why I’m pleased to offer my thanks and congratulations to Georgia Power for finding a win-win situation that conserves our natural resources and promotes America’s energy independence, while delivering value to their ratepayers and shareholders.

Where utilities can provide the financial performance demanded by ratepayers and shareholders, coupled with advances in technology making transmission reliable and safe, the adoption of renewable energy is no longer ideological, it’s just plain good business.

I’m not sure I would have ever expected to see a dedicated liberal environmentalist commending Georgia Power, but perhaps next we’ll see

Walter Jones writes for Morris News that disputes over construction of massive facilities like Plant Vogtle’s new nuclear reactors are not uncommon, and don’t necessarily point to problems or mismanagement.

Lawyers who specialize in large construction projects say such disagreements happen all of the time because the hundreds of contracts for the various vendors and subcontractors simply can’t anticipate every situation that could arise. Sometimes multiple contract provisions touch on an issue with different results depending on which is applied.

Usually, there are hundreds of claims by the contractor and hundreds of counter claims by the owners in multimillion-dollar projects, according to Scott Cahalan, an author, speaker and adjunct professor on construction contracts as well as an attorney with Smith Gambrell & Russell in Atlanta.

In the meantime, construction continues.

“The litigation and negotiations have not interfered with the relations between the sides, and both the owners and the contractors remain dedicated to completing the project in a safe and cost-effective manner which will benefit our customers for generations to come,” said Georgia Power’s Williams.