Georgia Politics, Campaigns & Elections for May 2, 2013

Georgia Politics, Campaigns & Elections for May 2, 2013

Governor Deal also announced that Engineered Floors will build two plants in Whitfield and Dalton Counties, bringing 2400 new jobs to Whitfield and Murray counties in Northwest Georgia, which has been battered by the economy and has one of the highest unemployment rates in the State.

House Bill 475 by State Rep. B.J. Pak and others will start a reciprocal driver’s license program for legal international citizens.

“International companies bring in around 20 percent of all new jobs created in Georgia each year,” said Deal. “The reciprocal benefits outlined in HB 475 will benefit the state’s status as a global player and reinforce Georgia’s reputation as a welcoming state.”

The Department of Drivers’ Services will oversee the reciprocity program, and the Department of Economic Development will verify that countries considered for the agreement will make, or are likely to make, a substantial economic investment in Georgia. Individuals will only qualify for the program if they have a lawful presence in the state and their home country offers similar opportunities for Georgians with a valid driver’s license.

Senate Bill 122 by Senator Hunter Hill and others will allow noncitizens to apply for an extension of their Georgia driver’s licenses within a certain time frame.

SB 122 will permit noncitizens whose Georgia driver’s license is facing expiration, or has already expired, to request a temporary driving permit or identification card valid for an additional 120 days, given they can remain lawfully within the United States.

“Economic development is based on good relationships, and having these arrangements in place acknowledges our understanding of the challenges that often face international businesses when they come to the United States,” said Chris Cummiskey, commissioner of the Georgia Department of Economic Development. “These new laws will further encourage international businesses to consider Georgia when looking to expand in this country.”

Deal also went to St. Andrews Montessori School in Macon, where he signed House Bill 350 by State Rep. Allen Peake and others, which requires Georgia’s 6,000 child care facilities to undergo national fingerprint-based background checks for employees. Previously, only state and local background checks were required, thus allowing people with criminal backgrounds in other states to be cleared to work in Georgia child care programs.

“Georgia children are our most precious assets,” said Deal. “This legislation puts criminal checks in the hands of law enforcement agencies rather than private companies, ensuring that those processing the checks actually have the information and tools needed to protect our children.”
.
An employee hired after January 2014 will undergo a fingerprint-based background check, and all current child care employees must be fingerprinted no later than Jan. 1, 2017.
.

U.S. Rep. Jack Kingston has a message for his conservative challengers for an open Senate seat: He won’t be outflanked on the right.

In announcing Wednesday that he’s joining the race for retiring U.S. Sen. Saxby Chambliss’ seat, the Savannah Republican told The Atlanta Journal-Constitution that he’s a workhorse who “will yield no ground to any of my opponents as to who is the most conservative.”

Some Republicans worry the primary could become so divisive and costly that a Democrat such as U.S. Rep. John Barrow, who is also considering a bid, has a strong chance against the eventual nominee. Some also fear that Broun’s far-right positions and fiery comments might prove particularly troublesome in a general election.

Kingston had a message for them, too.

“I think a Democrat has a shot under certain circumstances — if we come out of the primary divided and broke and bloody,” he said. “If I’m the nominee, a Democrat will not have that shot.”

Kingston also said that his political base in a Congressional District that is not overwhelmingly Republican taught him to work with the other party without selling out conservative principles. The quest for more federal funding for the Port of Savannah expansion thus becomes important to his Senate campaign.

Kingston may have to spend a little time shoring up parts of his Coastal Georgia district, if the Glynn County Republican Party’s Facebook page is any indicator.

Where is the outrage from our Congress? What is Jack Kingston’s position on this issue.

Everyone better be asking him these types of questions and demanding straight, honest answers before you give him your vote!

Kingston’s Senate Announcement Tour continues today with a press conference at The Big House, 2321 Vineville Avenue in Macon. Extra points to Kingston for holding an event at the Allman Brothers Museum.

In honor of Kingston’s Tour taking him to Macon:

Karen Handel Emails “Not Yet”

Karen Handel sent out an email yesterday essentially saying that she’s still considering a race for Senate and linking to a National Review story about her.

Washington has failed us, and the problems facing our country are immense. However, with a fresh vision and true conservative leadership, the return to a prosperous and growing America can be within our reach. What we need is clear: a proven reformer that brings new perspective, someone who isn’t afraid to “shake things up,” and a fighter that stays true to conservative values no matter the political cost.

Steve and I are continuing to think through this important decision and hope you will give us the benefit of your input.  Meanwhile, we thank you for your continued support, friendship and prayers.

We can’t follow up a National Review article entitled, “Hard to Handel” without offering this:

Jim Galloway wrote that the message sent by Handel’s email was “Don’t forget about me,” but people I spoke to yesterday suggested that Handel’s message was really intended to have an effect on Congressman Tom Price, whose dilly-dallying about his political future has put a potential Handel Senate campaign behind the eight ball and $2 million down against a trio of Congressmen.

Debbie Dooley, the AJC’s favorite quote machine for Republicans and Tea Party activists, was kind enough to send us an exclusive wrap-up of the Legislative Session from her perspective.

This past session was the culmination of unlikely alliances being formed and historic legislation passing in regard to ethics reform.  Atlanta Tea Party/Georgia Tea Party Patriots has been part of an alliance that was formed several years ago to promote tough ethics reform legislation. Part of this alliance includes Common Cause Georgia, League of Women Voters, Georgia Watch, Sierra Club,Georgia Conservatives in Action, and the Conservative Capitol Coalition.

These groups have worked together for over two years to get meaningful ethics legislation passed. This was the year that ethics reform passed that put limits on lobbyist gifts. This bill is a historic first step. Georgia Common Cause presented Julianne Thompson, Kay Godwin, Pat Tippett, Sen. Josh McKoon and me their coveted “Democracy Award” at an elaborate awards ceremony.  Another recipient was State Senator Jason Carter who just happens to be former President Jimmy Carter’s grandson and a strong advocate for tough ethics reform. 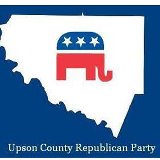 Gapundit.com  invites you to LIKE the Upson County Republican Party Facebook Page, and attend their next monthly meeting on May 11, 2013 at the Thomaston – Upson County Civic Center.

A small group of Georgia College Republicans will head to South Carolina this weekend to campaign for the Republican nominee in a Congressional Special Election. The young (and not-so-young) men on that campaign better read up on Tori Wester’s views about proper deportment in Republican Politics.

You don’t even have to support that particular candidate in South Carolina to think it’s worth investing in the future of some of Georgia’s upcoming Republican leaders. Drive past Starbucks and get a cup of free office sludge, and you can put that $5 towards a good cause.

Politicalvine.com brings us the sad news that Karen Ross passed away earlier this week. Karen was an active member of the Georgia Republican Party and maintained a public calendar of Republican and right-of-center meetings in Coastal Georgia. I considered her a friend. The memorial service will be held at First United Methodist Church, 1400 Norwich Street (across from Glynn Academy), Brunswick, GA  31520