Everything you need to know about the politics of the Tenth Congressional District is shown below in bathroom graffiti I saw Monday. Conservative, Constitutionalist, Misspelled. 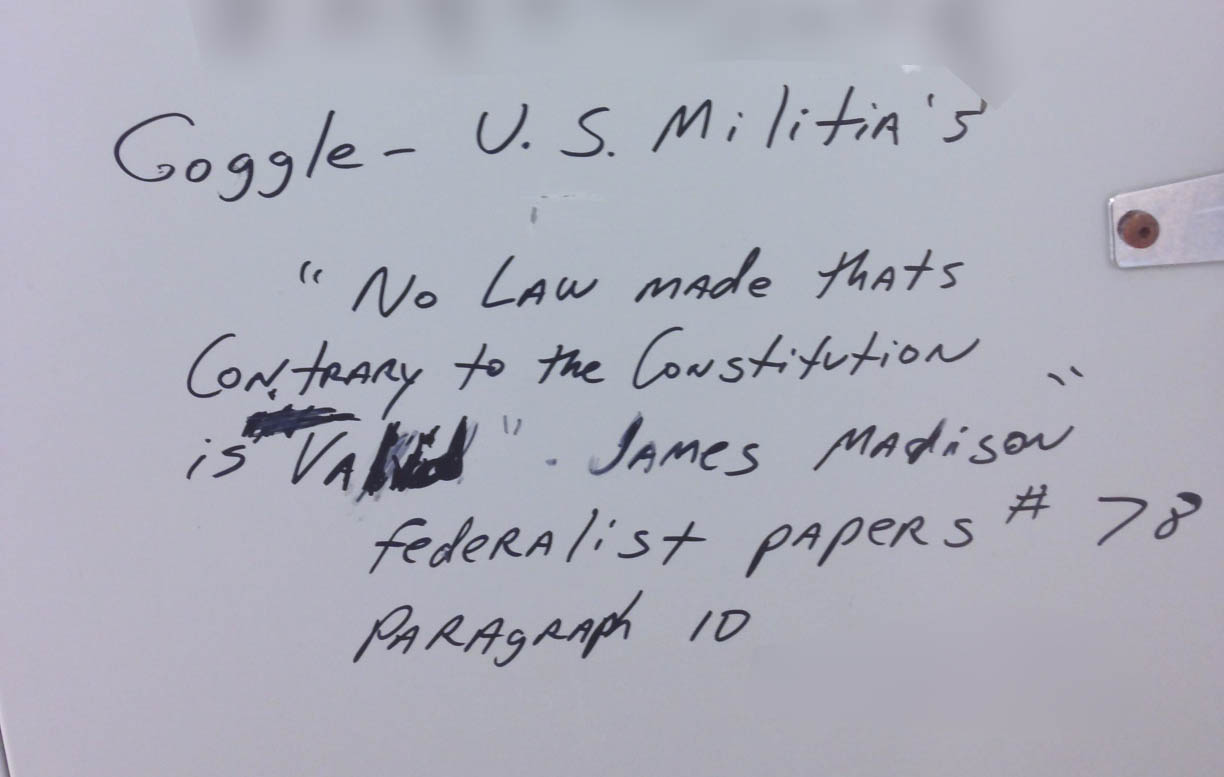 Stephen Simpson issued a statement about his exploratory effort in the 10th Congressional District and possibly the reason for the “big old grin” Senator Bill Cowsert noted when Cowsert announced he will not run.

We continue to test the waters for Stephen’s possible run to represent the people of the 10th Congressional District.  Stephen has received encouragement from every corner of our 25-County District.   Although no time has been set for a final decision, our independent committee will be reporting some $51,000 in contributions collected over a few week period.  The FEC report will also show a strong base of support and the support of former Governor Sonny Perdue.

State Rep. Bruce Williamson, who had been considering a run for Cowsert’s senate seat, emailed friends and supporters asking for their input on whether he should run for Congress.

Last night, our long-term Senator, Bill Cowsert, decided to take his name out of consideration for Paul Broun’s Congressional seat race.  Since his announcement, we have been encouraged by dozens of supporters across the district to consider running for the seat. Given our strong, life-long connections to this part of Georgia, we are giving it prayerful consideration and will take some time to discuss it with supporters and donors.

We need your feedback. What do you think? I need your honest thoughts and advice.

Williamson’s deep roots in Walton County, the largest pool of GOP Primary voters in the Tenth would give his candidacy an initial boost.

State Representative and Majority Caucus Chairman Donna Sheldon announced that she will run in the Tenth District. I initially found it curious that Sheldon’s press release included this line:

As a leader of the House Transportation Committee, she helped craft legislation creating 12 Special Tax Districts for Transportation along the Georgia Regional Commissions’ existing boundaries. This plan, which was signed into law by Governor Perdue on June 2, 2010, gave voters the opportunity to vote on the transportation needs of their area.

Then I remembered that there is some overlap between the Tenth Congressional District and the Central Savannah River Region, which was one of three in Georgia to pass the T-SPLOST.

I had planned on spending this week teasing one of Martha Zoller’s “5 Things I Learned Running for Congress,” currently published exclusively at InsiderAdvantage.com each day before it becomes free on Martha’s zpolitics.com. We’ll continue with that, but skip to day five before cleaning up the rest of the week:

Fifth, it’s okay to lose and Rep. Collins is a better representative because he had opposition. Doug and I were friends before this contest and we are friends now. So, the final lesson is, don’t carry a grudge. It doesn’t help. I’m a conservative and my main goal is to further the conservative cause because we are right. I am on speaking terms with everyone I ran against and most of their staff. I still need to have a conversation with Doug’s consultant, but he’s the last name to scratch off the list.

At the same time, Congressman Collins wrote “Yes, You Are Constrained By The Constitution,” for Martha to publish, neatly illustrating the point made above.

President Obama made headlines last week when he lamented the difficulty of passing gun control laws. “I am constrained… by a system that our Founders put in place,” the President said.

I’m committed to preventing this Administration and its congressional allies from imposing gun control on law-abiding citizens. That’s why I am encouraging House leadership to reject any gun control legislation that unconstitutionally restricts our Second Amendment rights.

Considered a prospect for the Eleventh Congressional District race for the seat being vacated by Rep. Phil Gingrey, Pridemore has been an integral part of Governor Deal’s successful efforts to lure new jobs to Georgia.

Tricia ran for Chairman of the Georgia Republican Party in 2010.

I received an email yesterday from B.J. VanGundy titled “Grassroots is not a buzzword, it’s a philosophy.” The best thing about it? It contains a listing of Georgia Republican Party District Convention locations, and listing of events at which he’ll appear in his campaign. Well done.

At a recent high-level meeting of GOP kingmakers, RNC Chief of Staff Mike Shields expressed disdain for grassroots activists – condescendingly and rudely describing them as the “professional right.” He went on to characterize grassroots organizations as “liars.”

It’s time for establishment Republicans to reexamine their priorities. At my first RNC national meeting as your state Chairman, I will stand up and demand Mike Shields apologize for disparaging hardworking activists, and if he fails to do so, I will move to remove him as RNC Chief of Staff.

In an April 3 letter from state Sen. Rick Jeffares, chairman of the Senate Ethics Committee, McKoon was informed an ethics subcommittee met March 27 to discuss the matter, and “after a review of the allegations of the complaints, the subcommittee did not find reasonable grounds to believe that you engaged in improper conduct.”

The subcommittee recommended the full ethics committee dismiss the complaints filed March 21 by board members Beth Harris, Athavia Senior and John Wells.
The full committee met March 28, the 2013 Georgia General Assembly’s last day in session. It accepted the subcommittee’s recommendation and dismissed the complaints, “subject to the complaints being reopened upon discovery of additional evidence or relevant material,” the letter read.

On Tuesday, McKoon said he expected the complaints to be dismissed. They obviously were intended to weaken his and Myers’ credibility to protect the school board and its policies, he said.

“It seems pretty obvious to me that what’s going on here is there’s been criticism of school board policy, and the policies that they’ve been pursuing are indefensible,” he said. “So rather than get into a discussion of the merits of their policy, they try to pursue this sort of drive-by character assassination….”

The board members’ aim likely was to generate headlines by filing baseless complaints, giving the public the impression the board’s critics lack integrity, he said. “I think that’s pretty plainly what was going on here,” he said. “It’s just pretty petty, gutter politics on the part of some members of the board of education that would rather engage in that than engage in a thoughtful discussion about their procurement and contracting practices.”

This is the most important news story today, as the Ports are one of the largest economic engines in Georgia. A deal has been reached between the longshore union and shippers to avert work stoppages at East Coast ports, including the Port of Savannah.

The contract between the longshoremen and the U.S. Maritime Alliance originally expired Sept. 30, 2012. Federal mediators negotiated extensions to avert possible strikes that could have crippled operations at major ports along the East Coast.

The union said the contract includes wage increases totaling $3 an hour spread out over the life of the agreement. By the final year of the new contract the hourly pay rate will be $35 an hour.

Members of the Maritime Alliance, an alliance of container carriers, direct employers, and port associations serving the East and Gulf Coasts, will vote to ratify the contract on April 17.

David Pennington sent out an email titled “40 Disappointing Days” yesterday, apparently part of exploring a quixotic Gubernatorial bid against Governor Nathan Deal. There are a couple of policy proposals in there I like:

Comprehensive Tax Reform: Our leadership should have tackled comprehensive tax reform. Three years ago a blue ribbon Special Council on Tax Reform and Fairness was chartered to retool the state’s tax code so Georgia could regain her ability to compete economically. Their proposal centered on reducing the state income tax because of the clear correlation between low or no state income tax and economic performance. Small businesses produce 65% of new jobs, most pay income tax at the individual rate, and they are facing onerous new taxes relating to healthcare. Georgia competes with Tennessee to the north and Florida to the south – neither of which has a state income tax.

Remember that we were promised an up or down vote on the Special Council’s tax proposal to prevent precisely what is happening – cherry picking without consideration of the whole. We never got that up or down vote.

Comprehensive Ethics Reform: We did not deserve the smoke and mirrors routine. Spending restrictions on lobbyists without all the loopholes should have been enacted. Two additional changes are also needed to boost the public’s trust in our state leaders. Open meetings laws that apply to local governments should apply to our state government; and a two-year hiatus should be imposed before legislators can be appointed to full time state positions.

I also agree with the Mayor’s criticism of the to-be $100 million “Invest Georgia Fund” because I think governments have an exceedingly poor track record of investing in private companies and should leave venture capital to the private sector.

That said, as long as Governor Deal continues announcing new jobs and facility openings, it’s hard to argue with the administration’s handling of job growth and I expect Deal to win election handily in 2014. You’ll probably see new numbers on Deal’s job approval this week.