Information on the car below from the Ferrari Club of America. 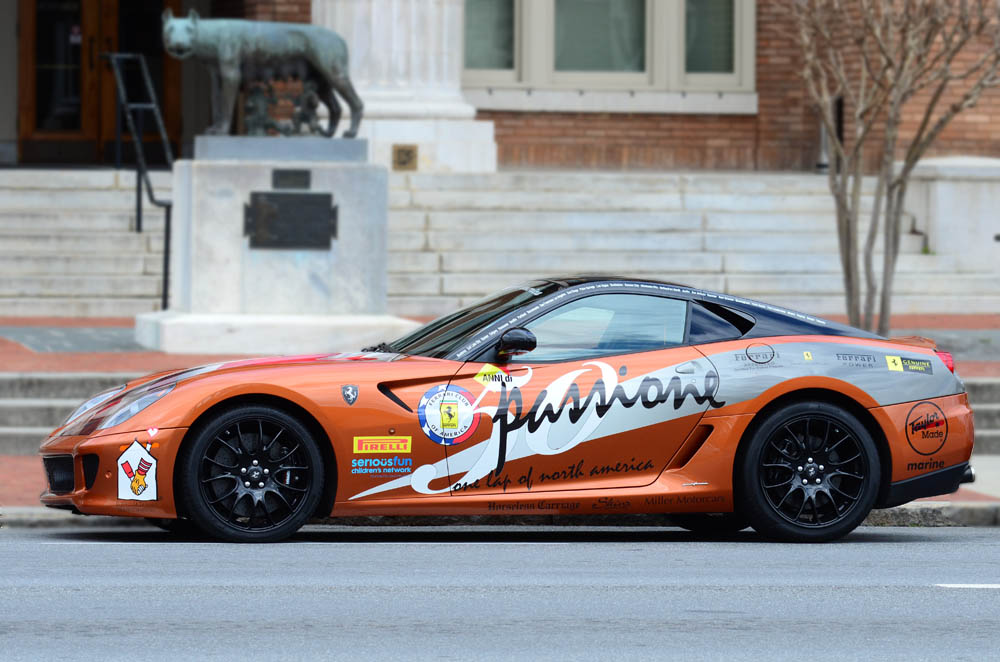 Our 50th Anniversary celebration – “Passione” kicked off at Concorso Italiano 2012! This was the launch of our 599 Relay car as it began a 20,000-mile journey across North America to visit every Region and Chapter and to both the Palm Springs and Elkhart Lake Annual Meets.

The relay is led by a special, one-off Ferrari 599GTB-HGTE built specially for Passione. This unique Ferrari, the very last North America specification 599 produced, has been made possible by Jim Taylor, FCA member and Patrono Principale of the FCA’s 50th Anniversary, and by Ferrari North America. The 599 has a unique paint scheme and interior design, as well as custom graphics representing the 50-year history of the FCA.

It stopped by the Rome, GA headquarters of Pirelli before heading to downtown Rome for a photo-op.

Here’s the write-up from the Rome News-Tribune:

The very last Ferrari North American Specification 599 car will be in town for a ceremonial tire change at the Pirelli Tire North American headquarters.

The 599 has a special paint scheme, interior design and custom graphics package.

The Ferrari Club of America celebrated its 50th anniversary in 2012. A group will be in Rome nearing completion of a cross-country relay to visit each region and chapter of the club. Every one of the 20,000 miles covered on the relay will have been made on Pirelli P Zero tires.

The cars are expected to arrive at the Pirelli plant at Floyd County Industrial Park around 11 a.m. today. The anniversary car will be taken to the research and development unit of the Pirelli North American headquarters for a special tire change.