Yesterday, we announced that I have been named Editor of InsiderAdvantage.com, which publishes a paid-content website and newsletter. No changes are planned to GaPundit.com and the GaPundit morning email will remain free. I hope that by teaming up with Matt Towery and IA we’ll be able to bring better content to both sites.

SB 68 by Senator William Ligon and others – relating to elementary and secondary education, so as to establish Celebrate Freedom Week; to provide for the posting of historical documents; to require the Department of Education to develop online resources and instructional support

SB 103 by Senator Tim Golden and others – relating to the powers of the State Board of the Technical College System of Georgia, so as to provide for the designation of community colleges

SB 143 by Senator Fran Millar –   to amend Article 1 of Chapter 20 of Title 47 of the Official Code of Georgia Annotated, relating to general provisions relative to the “Public Retirement Systems Standards Law,” so as to provide for the duties of the boards of trustees of public retirement systems

HB 338 by Rep. Joe Wilkinson and others – to amend Article 2 of Chapter 12 of Title 50 of the Official Code of Georgia Annotated, relating to the Georgia Council for the Arts, so as to clarify the role of arts in economic development and other vital functions to the state; to provide for membership changes; to provide for meetings; to provide for responsibilities

HB 266 by Rep. Allen Peake – to amend Title 48 of the Official Code of Georgia Annotated, relating to revenue and taxation, so as to define the terms “Internal Revenue Code” and “Internal Revenue Code of 1986” and thereby incorporate certain provisions of the federal law into Georgia law; to provide that certain corporate income tax elections made for federal income tax purposes shall also apply for state income tax purposes 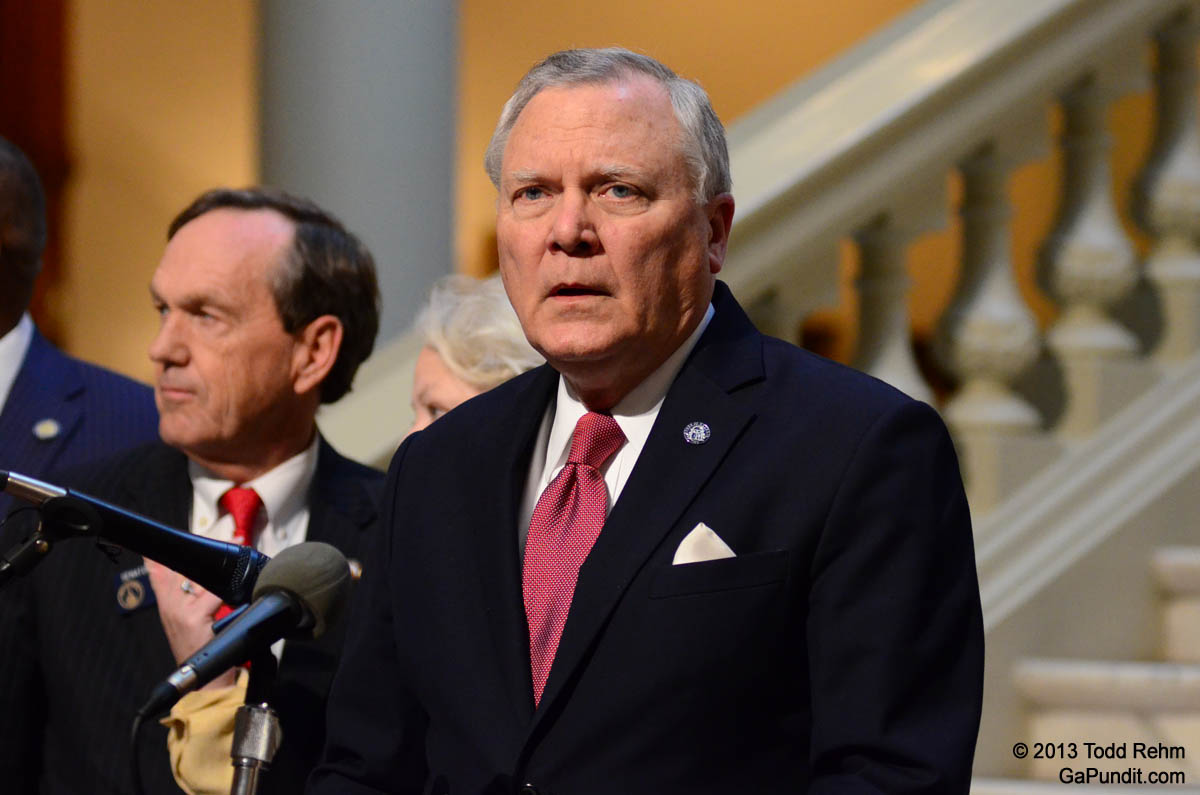 “The stakes are indeed high, the future of almost a hundred thousand students who are in the DeKalb County School system is indeed something we cannot take lightly.”

“I will also be appointing a nominating committee to recommend replacement of Board Members that have been removed.”

And then he was mobbed by the media. 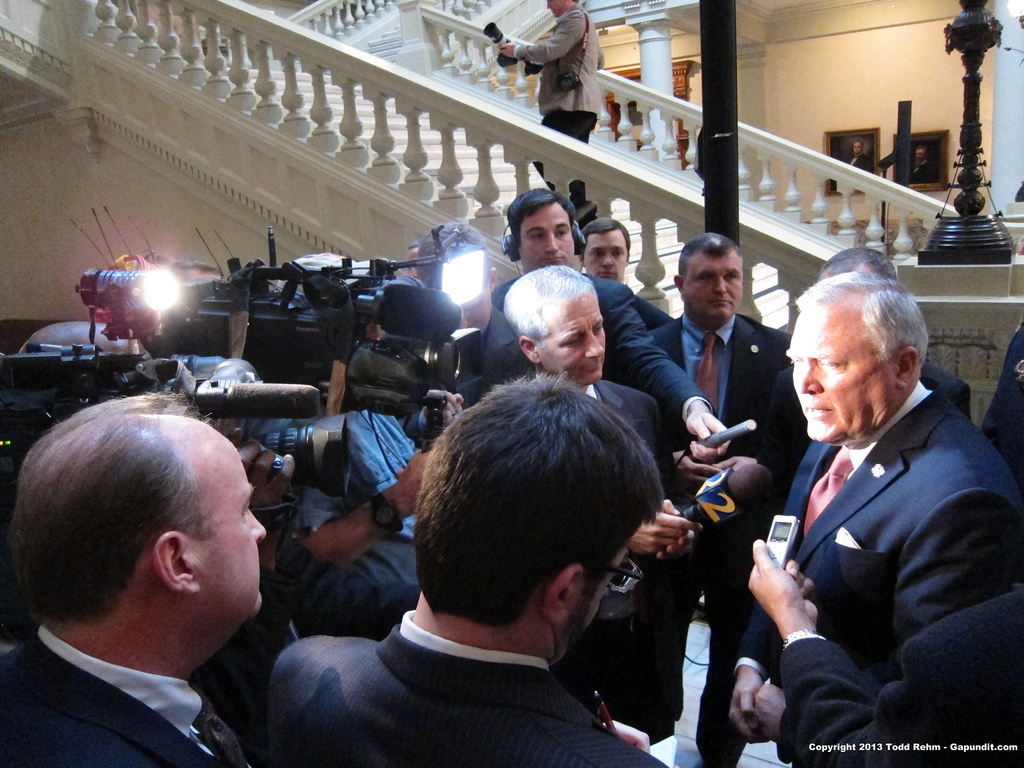 A video of the full press conference and more information, including the members of the Nominating Panel Deal named are available on the GaPundit.com website.

Enforcement of the Executive Order signed by Deal is currently enjoined from taking effect by a Federal district court until at least a hearing on Friday.

Rep. Taylor also has a bill to establish a school system for the City of Dunwoody, according to Jim Galloway’s Political Insider.

Senator Jason Carter (D-DeKalb) told Galloway he thinks there’s the possibility of a settlement before the School Board’s lawsuits go to court.

“I think that’s certainly possible. My understanding is that there are discussions that are ongoing about resolving the lawsuits in a way that will allow us to put this part of the process behind us.”

I think any settlement that could be taken seriously would have to include at the very least the resignations of school board members Gene Walker and Sarah Copelin-Wood.

Gene Walker, one of the school board members Deal removed, thinks it’s a political witch hunt.

“You don’t take anybody out of office for political reasons and that’s what’s being done here,” said Walker, the only named plaintiff in the board’s lawsuits against Deal in the state and federal courts. “All we’ve done … is act in the best interest of the school system.”

Walker vowed to press on with the lawsuits. “Why would we resign? We’ve done nothing wrong,” he said.

Walker defended the use of taxpayer dollars to fund the lawsuits. “I’m using public money to help protect the democratic process,” he said, describing the legal fight as educational for the public. “What price do you put on liberty and justice?”

Witch hunt? I’ll give you a witch hunt.

As for the non-judicial procedure from this point, the AJC writes:

Even if the legal challenges are abandoned or the suspensions are upheld, it could be months until the school board has new members. The six members would be suspended with pay – about $18,000 a year – and must wait 30 days to petition the governor for reinstatement. If they don’t do that within 60 days, they’ll be removed from the board.

Deal must wait 30 days after a petition is filed before holding a hearing on reinstatement. The law allows board members to be in suspension for up to 150 days before a final resolution on their status.

“We’re in a limbo now, and the real wild card now is what the courts do,” said state Rep. Scott Holcomb, D-Atlanta. “I think those on the school board who want to be reinstated need to get to work right away. Because they have one more bite at the apple.”

Others aren’t as concerned that the DeKalb board may not have voting powers for a while.

Possibly complicating things for the Board members who were removed by Gov. Deal is the erosion of support for them by Democrats in the legislature. According to Fox5Atlanta, state Senator Emanuel Jones said,

“We don’t want to have a long, protracted court battle, court argument. I would hope that the school board members will recognize that our students, our kids, that their interest is paramount to any of theirs.” said state Sen. Emanuel Jones (D-Decatur).

State Representatives Mike Jacobs (R-Brookhaven), Scott Holcomb (D-Atlanta), Tom Taylor (R-Dunwoody) and others have introduced HB 468, which would prevent the use of taxpayer dollars to defend school board members against removal procedures.

State Rep. Scott Holcomb introduced a bill Monday that would block school board members facing removal from using taxpayer dollars for their own defense.

Holcomb was at a town hall meeting Monday night to talk about everything going on in his district. Most of the questions were about the troubled DeKalb County schools.

“Let’s face it, they have failed,” Holcomb told Thomas.

“These are proposals that will change the culture of state government,” Speaker David Ralston, R-Blue Ridge, the bill’s sponsor, told his House colleagues in a rare appearance in the well of the House. “Let us take the lead and resolve this issue in a way that will let us go home, look our neighbors in the eye and say, ‘We did the right thing.’ ”

A coalition of groups including Common Cause Georgia and the Atlanta Tea Party Patriots criticized the bill as it went through the House because of loopholes that would exempt groups of lawmakers from the gift ban.

The legislation would let lobbyists pay for food and drinks served at events open to the entire legislature or meetings of legislative committees or subcommittees. The ban also would not apply to travel to conferences on issues related to lawmakers‚ duties.

However, the measure would do away with lobbyists buying meals, sports tickets or plane tickets for individual legislators.

“This will dramatically reduce the amount of lobbying expenditures that occur,” said Rep. Rich Golick, R-Smyrna, who steered the legislation through the House Rules Committee. “But it does have some common-sense exceptions.”

The House also voted unanimously for a related bill [HB 143] to require disclosure of campaign contributions between Jan. 1 and the opening day of each legislative session within five business days of the session start.

That period of up to two weeks is usually crammed with fund-raisers because lawmakers are prohibited from raising money during legislative sessions.

Some activists remain skeptical of the bill because of the provision that broadens the definition of lobbyist to require more people to register.

“Since when do we have to register for our first amendment rights just because we represent a group?” asked Debbie Dooley, with the Atlanta Tea Party. That is wrong”

“First of all, it does not require the average citizen to register as a lobbyist. All it does is simply require people who are here on a frequent basis advocating or against a bill to wear a name badge. That’s all it says,” Ralston said.

HB 142 as passed by the House does not meet the will the voters expressed thus summer because it still allows unlimited spending on lobbyist gifts to legislators because of exceptions allowed for group expenditures and travel for undefined “official business.” There are some good things in the bill such as restoring rule making for the Ethics Commission, however, the so-called cap is a trip wire. The House could have simply placed reasonable limits on these exceptions, but instead chose to ignore the will of the people. We’re hopeful the Senate will be more responsive to their voters.

HB 143, likewise has some good parts, but sends Georgia back to the internetless age where transparency has been traded in for dusty files cabinets in the basements of city halls and county commissions across the state.

And Julianne Thompson, Chair of the Georgia Republican Assembly, and a leader in the Tea Party movement sent the following quote:

Thank you to those who voted against this legislation for putting principle over political pressure. We are very disappointed that so many Representatives feel unpaid citizen grassroots activists must register as lobbyists to petition their government. Such unwarranted regulation of the First Amendment should give voters cause for concern.

We now move on to the Senate where we hope the egregious parts of the legislation will be corrected and actually will focus on helping the legislators to better guard themselves and build trust rather than tear it down, as with the retaliatory language against grassroots activists as represented in the House version.

When it comes to lobbying disclosure, is there such a thing as too much information? In their post titled “The top 5 Ethics Disclosure Pitfalls Rick for Lobbyists,” Rick Thompson & Associates says that some lobbyists overshare when disclosing expenses.

MC Hammer was pulled over for expired car tags in Alameda, California and was arrested for obstructing an officer. You call it obstruction, he calls it Hammer Time!

Bonaventure Cemetery in Savannah made the list of the top 10 most beautiful in the world compiled by CNN Travel.

Beer distributors employ more than 3100 Georgians, impact another 8395 jobs, and contribute about $1.3 billion per year to the Georgia economy.