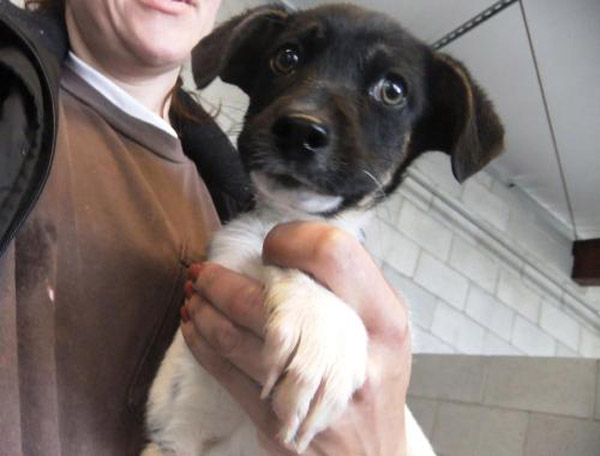 Valentine is a small puppy who is so scared of being in the Warner Robins Animal Shelter that he needs immediate adoption or rescue. He is a black and white (with a little bit of brown) Bulldog mix that is very thin.  He is scared of his own shadow.  He draws into himself as far as he can anytime someone comes near. Please understand that an animal shelter is often bewildering and scary, especially to puppies, and that they often will be more friendly and outgoing once they’re in a home and feeling more secure.

Cupid #1 above is an adorable bulldog/pointer who is available for adoption from Save a Pet in Forsyth, Georgia. Cupid’s sibling Valentine is at the shelter also. He is great with kids and other dogs. He is a happy go lucky, friendly guy who wants a forever home!

Cupid #2 is a medium-size 6-7 year old female terrier mix who is available for adoption from Life’s Little Paws in Alpharetta, Georgia. Cupid is very quiet and gentle. Great with other dogs and loves children. 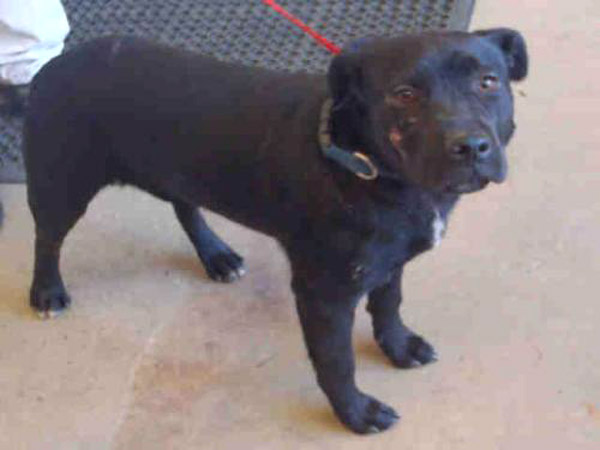 Cupid #3 is a black Lab mix who is available for adoption from the City of Macon Animal Control Department.

Today is Legislative Day Eighteen of the 2013 Session of the Georgia General Assembly. It will also be known as “Pharmacy Day” as more than 600 white-coated pharmacists and pharmacy students roam the halls of the Capitol.

The State Senate has two bills on its calendar today when it convenes at 9 AM. 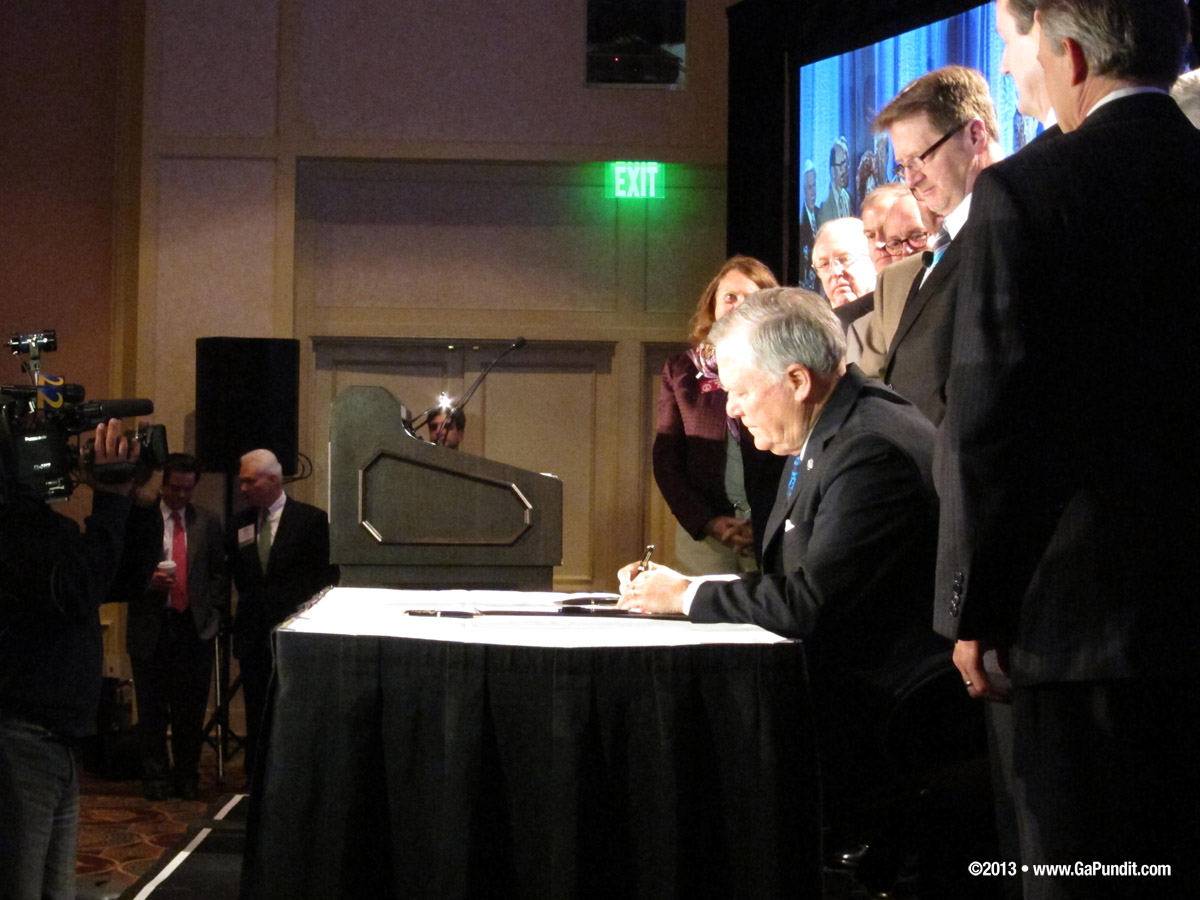 Yesterday, Governor Nathan Deal spoke to the Georgia Hospital Association before signing the first bill of 2013, Senate Bill 24, which is either a hospital bed tax or a hospital provider fee, depending upon whom you are speaking to. Deal’s 20-minute speech, which is viewable here in its entirety, also addressed Georgia’s shortage of trained nurses:

This year my budget proposes to recognize that we still have jobs that we are not filling with people in our state, and in your particular arena, one of those areas is nurses. One of the proposals that we have put into place is to say that within our technical college community, which trains a lot of our nurses, we will give priority to those who pursue a nursing certificate or degree, and instead of receiving the normal allocation of a HOPE Grant, they will be assured that at least 90% of the cost of their pursuing of that degree will be covered by the HOPE Grant program.

The measure will patch a hole in the state’s Medicaid budget by ensuring the state continues to receive $700 million in reimbursement.

Although the loss of $700 million in funding has been avoided, the state’s Medicaid woes are far from over. The program is still facing a nearly $390 million budget hole even with plans by the Department of Community Health to trim tens of millions of dollars. Medicaid enrollment, which already provides care for 1.7 million low-income residents, continues to swell as the economy continues to struggle and Georgia’s population grows. And President Barack Obama’s health care overhaul brings with it new costs and penalties, many of which remain unknown.

Already, some hospital executives worry that the Department of Community Health’s proposal to cut Medicaid reimbursements by 0.74 percent for many providers could lead some physicians to limit the number of low-income patients they’ll see — or stop accepting them altogether.

“Some have said enough is enough,” said David Tatum, vice president of government affairs for Children’s Healthcare of Atlanta.

An interesting behind-the-scenes tidbit is that the pens used to sign legislation have become prized keepsakes for many of the people who worked on the legislation. So when Governor Deal sat down before SB 24 yesterday, he went through 14 pens to sign his name. 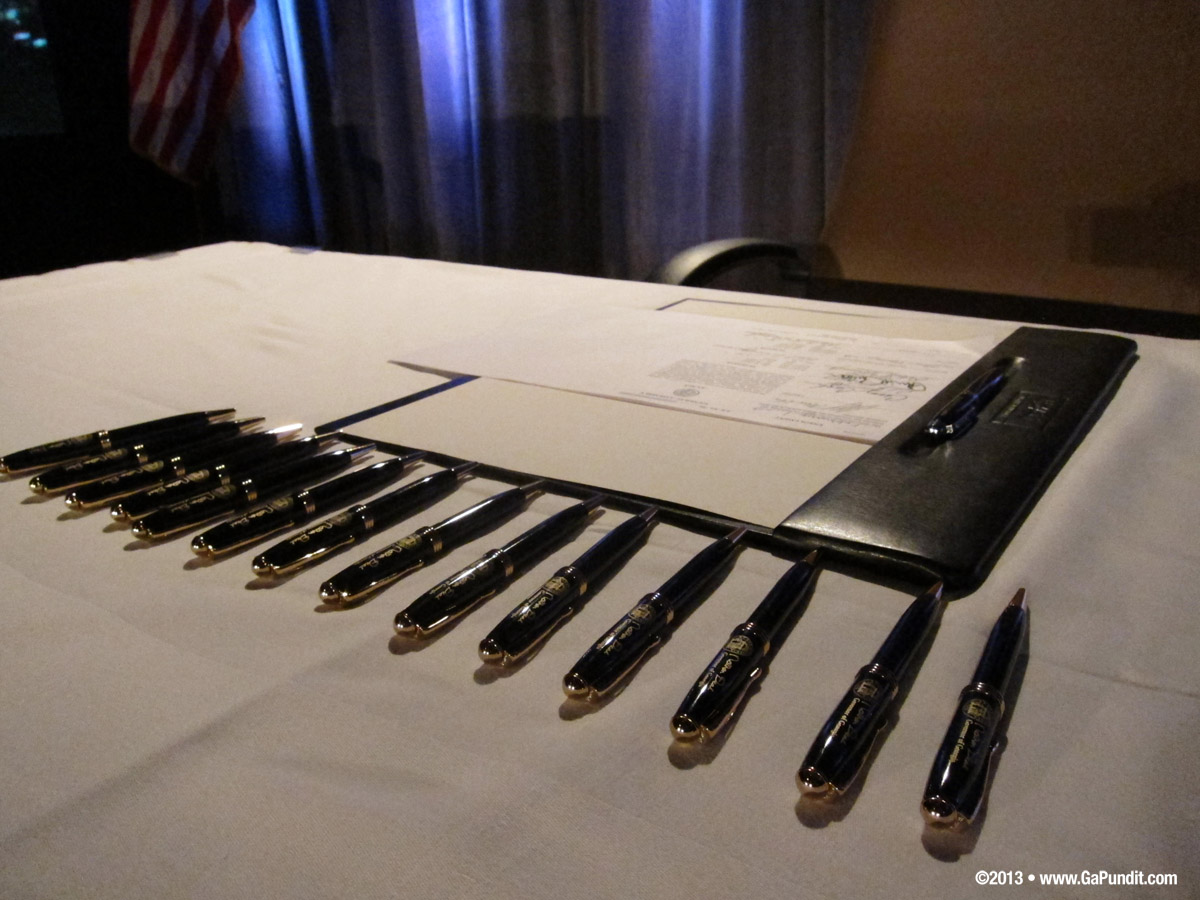 Governor Deal also signed HB 55, under which wiretaps approved by a state judge may now be effective across county lines.

Senate Bill 74 by Sen. Barry Loudermilk passed the Senate Public Safety Committee, and would allow Georgians 18 to 21 who have passed military basic training to receive a concealed weapon permit.

State Rep. Tyrone Brooks (D-Atlanta) got some backup from the Georgia NAACP and other civil rights groups after news that his management of the Georgia Association of Black Elected Officials is under FBI investigation.

Attorney General  Sam Olens added his signature to an amicus brief to the United States Supreme Court asking the court to hear a challenge to  restrictive gun laws in the State of New York.

“The Second Amendment explicitly gives law abiding citizens the right to not only keep arms, but also to bear arms,” Olens said, in a statement. “By requiring citizens to demonstrate a ‘special need for self protection’ in order to legally carry a firearm outside the home, the state of New York is depriving its citizens of a fundamental constitutional right. This case rises to the level of Supreme Court review as it involves a core individual liberty enumerated by our Founding Fathers in the Bill of Rights.”

Maybe we should consider invading New York for their water instead of Tennessee. I’m sure the Yankees are less-well armed these days. Speaking of invading Tennessee, Brad Carver has me pretty well-convinced that Georgia has a strong case for taking back the portion of Extreme Northwest Georgia that is currently occupied by Tennessee.

Can anyone tell me why the State of Georgia has not yet sued Tennessee? After 195 years of asking them politely to return our dirt, it seems pretty clear to me that our best move is to take it to law.

Working with a similar caucus being established by their South Carolina counterparts, the organizers want to safeguard the tourism and farming interests tied to lakes on the upper end of the river that is the border between the two states.

“I think the common bond of this caucus will be water issues,” said Rep. Alan Powell, R-Hartwell.

Those attending Tuesday were from Augusta and upstream communities where the river is dammed to form a series of lakes. They are frustrated that the U.S. Army Corps of Engineers that manages the lakes doesn’t retain enough water in them to prevent the waterline from dropping. Lake Hartwell and Lake Thurmond both dropped 16 feet below full pool, exposing chimneys in Thurmond from houses that were inundated when the lake was built.

The Atlanta Falcons have ratcheted-up the rhetoric on their demands for a new stadium.

“We would have no choice but to consider pursuing another option in metro Atlanta” if negotiations break down, Falcons President and CEO Rich McKay said. “Please don’t let anybody say that’s a threat. No, that’s just a reality of what we have to do as our lease is about to end.”

“We could do it (build a new stadium) for a lot less cost (elsewhere). That would not be our first choice,” McKay told a gallery of council members and citizens, adding that he was relaying the sentiments of Falcons owner Arthur Blank. “We think (downtown) is where the deal should be done, but it is our intent to play in a new stadium in 2017.”

Atlanta Mayor Kasim Reed thinks the city investing in a new stadium is “the right decision at the right time.”

The Board of Regents approved Kennesaw State University’s plan to bring football to campus.

In documents to the Board of Regents, the university detailed that it also has a sponsorship for $5 million over 10 years. That sponsor will be officially named on Thursday along with a timeline for hiring a coach. KSU also reported eight letters of intent for suite rentals at KSU Stadium for $35,000 each for a total of $280,000 in its first year, as well as a letter from the KSU foundation promising support of $200,000 annually.

Papp said adding football is about more than just game-day experiences. He said the addition will raise the profile of the university and add values to degrees, using examples of how when he worked at Georgia Tech, whenever we went somewhere to ask about fundraising he was usually first queried about the football team’s potential.

“It’s simply a tremendous way to increase the visibility of the university,” Papp said.

The team will play at the KSU Stadium, which seats slightly more than 8,000. KSU is considering a renovation to the suites on the West side of the stadium. The stadium was constructed with the addition of football as a possibility.

The team will likely practice in a field adjacent to the stadium, which is on the east side of I-75. Most of the campus is on the west side.

Maker’s Mark Bourbon Whisky will be slightly less sweet as the company dilutes its top product in order to meet higher demand.

The producer of Maker’s Mark bourbon is cutting — likely permanently — the amount of alcohol in each bottle to stretch every drop of the famous Kentucky whiskey. The alcohol volume is being lowered from its historic level of 45 percent to 42 percent — or 90 proof to 84 proof.

“Given the surge in demand outstripping supply, what we’ve decided to do very carefully is to slightly reduce the alcohol volume.”

The recipe and production process will stay the same, except “a touch more water” will be added when the whiskey comes out of the barrel for bottling, Samuels said. The brand’s bourbon is made at its distillery near the small town of Loretto, 45 miles south of Louisville.

Water is typically added before whiskey goes into the barrel for aging and after bourbon comes out for bottling, he said.

It’s the first time the bourbon brand, more than a half-century old, has altered its proof or alcohol volume.

The change was done only after extensive testing showed it didn’t alter the taste of Maker’s Mark, he said.

“Paramount in our decision was ensuring the taste standard is exactly the same,” Samuels said.

This seems an appropriate place to mention that Atlanta ranks as the 10th most-financially stressed city in America and Georgia the third-most stressed state.