UPDATED: Is Brian Laurens Lying about an endorsement in House District 21?

UPDATED: Is Brian Laurens Lying about an endorsement in House District 21?

UPDATED: Mike Hassinger at Peach Pundit had the patience to wait for an answer from Georgia Conservatives in Action on whether they were responsible for the mailpiece. I didn’t wait because I’d heard that they were disowning it, and I think that the history of Republican Political Consultant Brian Laurens and political campaigns made it more likely that he fabricated the whole affair than that GCIA broke with their history of not endorsing as an organization. 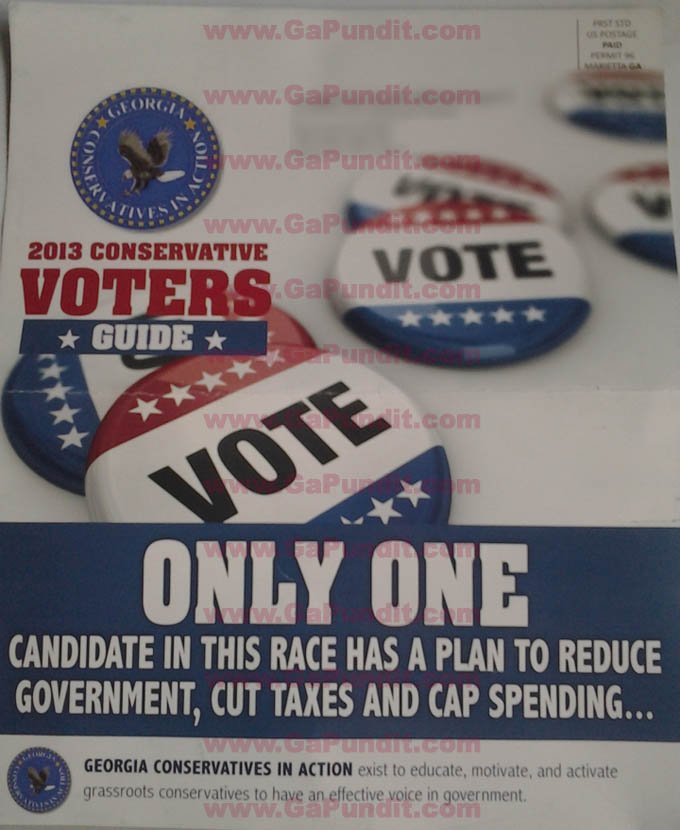 Laurens has attempted to deceive voters in the 21st House district into believing that he has been endorsed by Georgia Conservatives in Action. See for yourself:

GCIA, according to Pat Tippett, (who runs the group along with Kay Godwin) “We did not endorse. He sent that out on his own.” GCIA has also asked for a retraction, although retracting a mail piece 3 days before an election would be unprecedented in the history of voting. (Note: we are not the only outlet aware of this. Todd Rehm at GA Pundit has his own take on this issue, with more history, here. Peach Pundit responded after verifying the deception with the folks at GCIA.)

It’s pretty clear to me that Republican political consultant turned candidate for State House District 21 Brian Laurens is trying to imply with this mailpiece that Georgia Conservatives in Action has endorsed his candidacy. Would Brian Laurens lie to win a campaign?

The problem is that the website referenced on the mailpiece, has no mention of Brian Laurens, no endorsement or statement of support, and no “2013 Conservative Voters Guide.” 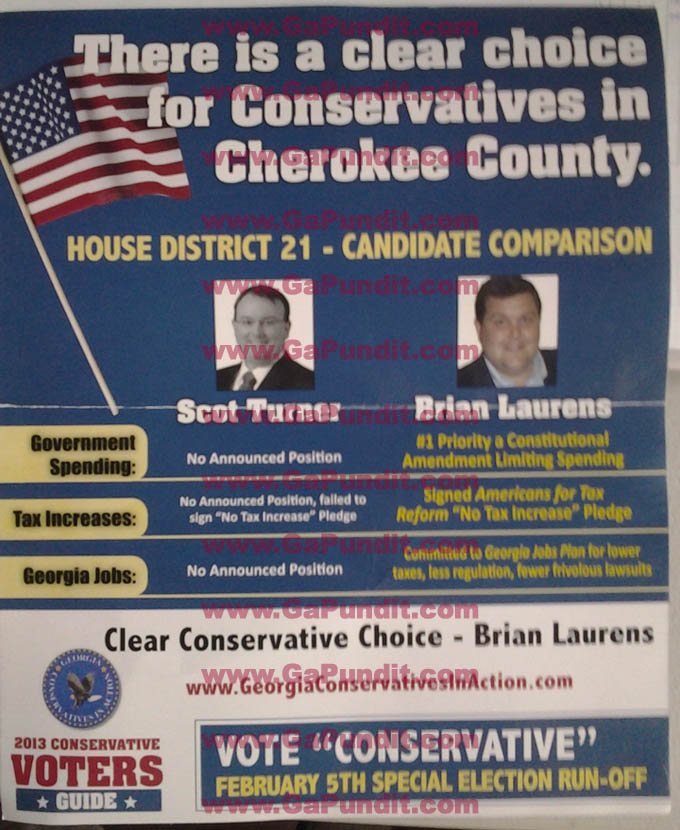 But surely, a Republican political consultant and candidate like Brian Laurens knows you can’t use somebody else’s name and logo without their permission, right?

Wrong. Former Senator Chip Rogers was a political mentor and longtime employer of Brian Laurens. And the campaigns of Chip Rogers show a pattern for ignoring trademark law, which is to say, other people’s property rights.

the University of Georgia and Georgia Tech are on his case for his using their logos on his yard signs without permission. His supporters have been told to remove them — pronto. It just hasn’t been a beautiful day in Mr. Rogers’ neighborhood recently.

and note that when caught, Rogers didn’t say he wouldn’t continue to use the signs, just that he wouldn’t print any more:

Georgia Board of Regents Vice Chancellor for External Affairs Tom Daniel confirmed to the Ledger-News Friday that he has asked Senate Majority Leader Chip Rogers’ alma mater, Georgia Tech, as well as the University of Georgia, to pen letters to Rogers asking him to quit using those schools’ patented sports team logos on campaign signs. All university system patented logos are the property of the Board of
Regents.

Rogers’ campaign spokesman Robert Trim said the senator would not have any more signs printed with the logos.

Trim said the signs with the logos were printed for a special event a few years ago, and the only ones in circulation are ones people took home with them.

“We distributed (those signs) over two years ago, and we are honored support for Sen. Rogers is consistent and long-lasting,” Trim said.  “We think the recycling of signs from former events represents conservative values.”

In fact, that earlier use of somebody else’s property without their permission had landed Rogers in hot water too. From 2010:

Senator ChipRogers apparently did not get the memo that the University of Georgia does not look kindly on candidates using their logo for political purposes. Yesterday he, or whoever is running his Facebook, invited me to join his Facebook group.

The use of the Georgia “G” and the word “Dawgs” is a violation oftrademark rules by the campaign. John Oxendine got in trouble for it in the past.

How does that connect to Brian Laurens? I’m glad you asked.

It appears that Chip Rogers bought the vast majority of his campaign signs from Signs Unlimited in Ocala, Florida, the same company that Brian Laurens lists as an employer on his Campaign Personal Financial Disclosure. The punch line? Lauren lists his job title with Signs Unlimited as “Sales Manager.”

But it gets better. An earlier candidate to get in trouble for misappropriating the UGA and Georgia Tech logos was John Oxendine, when he ran for Governor in 2010. And where did he buy his signs? You guessed it. From Signs Unlimited in Ocala, Florida. Notably, Brian Laurens was also employed by the John Oxendine for Governor Campaign.

So it might appear that Brian Laurens may have previously sold signs that misappropriated someone else’s trademarks to two separate political campaigns, whether he was aware of the issues or not.

The question to ask is whether Laurens learned from earlier results that you shouldn’t use somebody else’s logo without their permission, or that you’re likely to get away with it.

P.S., want to bet that the political direct mail above was produced by Laurens Direct Mail / Brikel Communications?