We begin the day today in Chatsworth, in Murray County, Georgia, where the following dogs are available for adoption today. 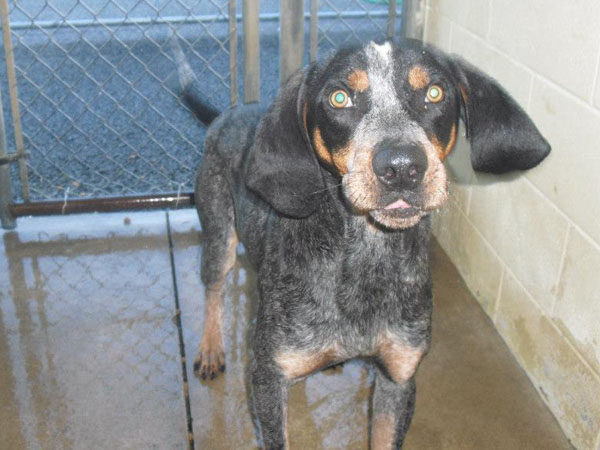 This is a purebred male one-and-a-half year old bluetick coonhound, who is available for adoption today, or he’ll be euthanized pre-dawn tomorrow. Email [email protected] or call Lisa Hester at 770-441-0329 if you’re interested in adopting or fostering him. Transportation is available. Coonhounds are wonderful pets, typically very mellow indoors, and this guy is known to get along well with people and other dogs. Runners in particular will do well with these hounds, as they’re very athletic. 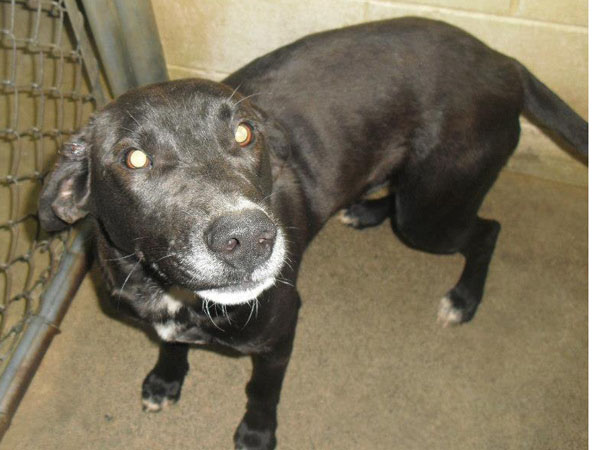 This 11-month old black lab mix is said to be a great dog, enthusiastic tail-wagger, and friendly to people and other dogs. If not adopted or fostered before midnight, he’s scheduled to be euthanized. Email [email protected] or call Lisa Hester at 770-441-0329 if you’re interested in adopting or fostering him. Transportation is available.

Murray County is also notable for this unfortunate fact: it has one of the highest unemployment rates in the state at 11.4%, nearly twice the rate of nearby Catoosa County (5.8%).

Metro Athens had the lowest area jobless rate at 6.2 percent, while metro Dalton had the highest at 11 percent.

Cherokee County has the lowest unemployment rate in Metro Atlanta, at 6.4 percent.

A potential disaster for our state’s economy looms as the International Longshoreman’s Association (Union) meets with the U.S. Maritime Alliance, which represents shippers.

In a last ditch effort to avert a strike that would cripple U.S. commerce, the International Longshoremen’s Association and management will meet one more time before the expiration of their contract extension at midnight Saturday.

Both sides agreed to come back to the table at the request of the Federal Mediation and Conciliation Service, the federal agency charged with mediating private sector labor disputes.

A strike of the East Coast ports would not only harm shipping and land transportation, but would ripple through the consumer markets and U.S. manufacturing.

Retailers fear another strike could have catastrophic effects and have asked President Barack Obama to intervene.

The National Retail Federation wrote to Obama last week and asked him to use “all means necessary” to head off a strike.

“We foresee this as a national economic emergency, to be honest,” said Jonathan Gold, the group’s vice president of supply chain and customs policy.

Billions of dollars in commerce at businesses nationwide could be affected, from auto manufacturers awaiting parts to the truckers who deliver them, Gold said.

No date or place for the meeting was announced, although the last round of talks was held at the Marriott Hotel at the airport in Newark, N.J.

Those talks broke off last week with no more meetings scheduled.

Although a number of issues remain unresolved, the major sticking point involves container royalties, annual payments to dockworkers based on the weight of container traffic coming through their port.

On January 1, 2013, T-SPLOST taxes will kick in for 46 counties in Georgia whose regions approved the penny sales tax.

Three voting regions in east, southeast and west Georgia approved the extra penny on the promise that the money will be spent locally to widen roads and rural highways, fix sidewalks, install new traffic lights and maintain and repair aging bridges.

“Some are things that have been on the books for years,” said Andy Crosson, executive director of the Central Savannah River Area Regional Commission, where voters approved the tax for 13 counties near the Georgia-South Carolina line, including Augusta and surrounding Richmond County. “I think it passed out of frustration that the money always seemed to go somewhere else and our projects never got done. This was our chance.”

The Savannah River region is projected to raise $848 million with the new tax, according to the state’s latest estimates from November, which vary slightly from numbers released before the election.

The River Valley region, which has 16 west Georgia counties and includes Columbus and Americus, expects $591 million over the 10-year tax period.

And there will be an estimated $395 million for the Heart of Georgia region of 17 mostly rural counties that includes the cities of Vidalia, Dublin and Jesup.

“Georgia consumers who want to provide healthcare coverage for their children can begin the process during the open enrollment period of January 1-31,” Commissioners Hudgens said.  “To guarantee that children get the quality medical care they need, I encourage parents and guardians with uninsured children to consider purchasing this coverage.”

A “Child-Only” plan is a type of policy that can be purchased by parents that are uninsured, whose employers do not offer health coverage to dependents, or who have had a qualifying event such as loss of coverage due to job change. A legal guardian can also purchase this type of policy if they are insured by Medicare.

House Bill 1166, which established “Child-Only” policies, was an effort by the Georgia Legislature to assist parents with children under age 19 who are not currently covered, and who do not have access to creditable health insurance coverage.  The bill was sponsored by Representative Alex Atwood.

The desire to attract or keep manufacturing jobs collides with local government budgets that are stretched to the point of breaking, as some communities are deciding to levy a local sales tax on energy used in manufacturing to make up for the share of the state tax they received before it was repealed this year.

Bartow and Gordon counties are among the Georgia communities keeping their share of a tax on the energy used in manufacturing, but the Floyd County Commission has yet to make a decision.

The Rome City Commission could opt to impose it within the city limits if the county does not take action.

“I personally feel that by not implementing it, it will make Floyd County more competitive over counties that do implement it,” County Commission Chairman Irwin Bagwell said.

Gov. Nathan Deal, a Republican, signed a tax package this year gradually phasing out a 4-percent state tax on the energy that manufacturers use to produce their goods. Manufacturers typically pay another 2 or 3 percent in taxes on that energy to local governments. The Republican lawmakers who backed the bill allowed local officials to create a new tax that phases in as their share of the energy tax disappears.

While no one officially tracks how many counties have imposed the tax, several counties did take that step before the beginning of the four-year phase-out.

“I just didn’t see the county could take that kind of hit,” said Clarence Brown, the sole commissioner for Bartow County, which imposed a tax. “That was just too much.”

He noted that local manufacturers will still benefit from reduced state taxes, even if their local taxes stay the same. Brown said no firms have complained to him.

“I think they realize how bad the shape Bartow County is in,” he said. “They want the fire trucks and the ambulances to keep rolling.”

The Gordon County Commission approved a local tax in early November. In weighing the pros and cons, County Administrator Randall Dowling noted the loss would affect revenue for both the SPLOST program and the local option sales tax used to offset property taxes.

“And, remember, this is not a new tax,” he said. “It’s keeping what we’ve had for decades.”

Manufacturers are more cost conscious now that the economy is weak and facilities are producing less than their actual capacity, said Roy Bowen, president of the Georgia Association of Manufacturers. As a result, firms are looking for opportunities to consolidate manufacturing operations and save costs. Costs, including local taxes, are a factor when firms decide which plants to shutter.

The Georgia Agriculture Tax Exemption program, passed by the legislature this year, also goes into effect on January 1, 2013, and will allow producers to apply for a tax exemption on  many goods and services used in production.

Mary Kathryn Yearta, chief communications officer for the Georgia Department of Agriculture, said at least 45,000 producers are estimated to be eligible for tax exemptions.

She said the new system allows for more organization, along with providing extra savings for agricultural producers.

“It kind of pulls all the ag(ricultural) exemptions into kind of one central place,” she said. “Plus, the economy’s still not in its best shape ever so anything we can kind of do to help local businesses stay competitive with other states is a good thing.”

Yearta said the department, which reviews applications, is making progress on spreading the word about the changes.

“What we don’t want to happen is a producer go into a store and find out they need a card to get their tax taken off,” she said.

In Gwinnett County, Commission Chair Charlotte Nash, Commissioner Jace Brooks, and Commissioner-elect Tommy Hunter will be sworn in on Sunday at 3 PM.

Nash has been in office for 18 months, since winning a special election in March of 2011 to replace Charles Bannister, who resigned. She didn’t have to compete for her first four-year term, after being unopposed in the primary and general elections this year.

Brooks won the four-year term in a primary in July, then was the sole candidate for a special election to fill the seat left behind when Shirley Lasseter resigned, pleading guilty to a bribery charge. He took his first oath of office in September.

The new guy is Tommy Hunter, who won the role after defeating incumbent Mike Beaudreau in an August primary runoff.

The public is invited to the swearing-in, which will be administered by Chief Magistrate Judge George F. Hutchinson III, at the Gwinnett Justice and Administration Center.

At age 23, Woodstock resident Michael Caldwell is the youngest state legislator elected to the Georgia General Assembly, which will convene on Jan. 14 for its 2013 session.

But that doesn’t phase the representative-elect from the House District 20 seat, which covers most of Woodstock and Towne Lake. Caldwell is ready to serve the residents who elected him to the seat, but noted he’s “humbled” by the support he’s garnered in his new capacity.

The new year will also mean campaigns and elections for city offices across Georgia. Warner Robins might have a real fight for Mayor this year.

Unlike the 2009 mayoral race that saw two relatively low-key candidates pop up, the 2013 race may not be so green. Former councilmen, a former city fireman and a name made popular in the last mayoral election are among the whispers.

Only one contacted last week was ready to confirm he’s running, while the others talked around the question of a potential November 2013 bid. Still, none ruled it out.

Qualifying for the race, and three council seats, begins in August.

The Atlanta Hawks are buying “green energy” from Georgia Power for the 2012-2013 basketball season.

Some enterprising DeKalb County residents are circulating a petition urging Governor Deal to remove the DeKalb School Board after SACS put the county school system’s accreditation on probation. Personally, I’d keep Nancy Jester on the board, but would otherwise sign the petition.