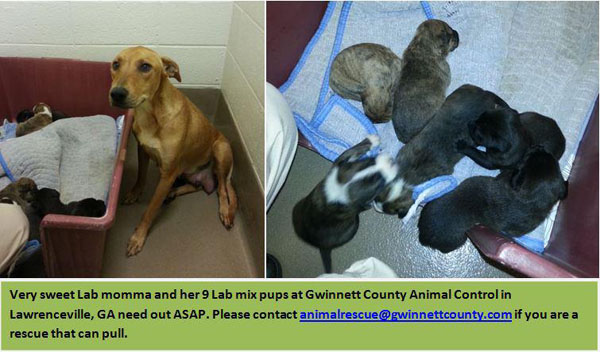 This mother and pups need to be freed from the Gwinnett County Animal Shelter as soon as possible. Puppies are more susceptible to illness, which in a shelter setting leads to immediate euthanasia to prevent the spread of disease.

Congresswoman Kathy McMorris Rodgers was elected Chair of the House Republican Conference yesterday, defeating Rep. Tom Price. Newt Gingrich was nominated for Speaker by a Texas Congressman, but did not win.

The Republican Governors Association is meeting in Las Vegas and will dissect the GOP’s failure in this year’s General Election.

In conversations at the Republican Governors Association confab in Las Vegas, a half dozen party leaders predicted the GOP will lose again if it keeps running the same playbook based on platitudes in place of detailed policies. Instead, they asserted, the party needs to learn the lessons from its loss, respect voters’ savvy and put forward an agenda that appeals beyond the while, male voters who are its base.

“We need to acknowledge the fact that we got beat,” Louisiana Gov. Bobby Jindal said in an interview. “We clearly got beat and we need to recognize that.”

Little more than a week after Romney came up short in his presidential bid, the party elders were looking at his errors and peering ahead to 2016’s race. Some of the contenders eying a White House run of their own were on hand and quietly considering their chances. New Jersey Gov. Chris Christie scheduled a private meeting on the sidelines with Haley Barbour, the former Mississippi governor who is widely seen as one of the GOP’s sharpest political operatives.

Cobb County voters will go to the polls in March 2013 to vote on extending the Education SPLOST, worth an estimate $717 million.

The one-cent sales tax, if approved by voters, would begin in January 2014 and would be collected through December 2018.

But before the vote, representatives of a local taxpayers group and the Georgia Tea Party spoke out against a March referendum.

“Gov. Deal has been playing a game of political chicken with health care in Georgia. He has delayed the creation of our state’s health care exchange under the Affordable Care Act believing a Romney win would repeal our nation’s new health care laws,” Henson said in a press release. “Instead of prioritizing Georgians’ health, bringing our hard-earned tax dollars back to the state, and retaining state control over our insurance programs and industry, Deal continues to demonstrate he cares more about politics than people. Our citizens are not chess pieces in a giant political board game.”

Senator Chip Rogers (R-Woodstock) is being criticized for hosting a meeting to discuss Agenda 21 at the State Capitol.

Fulton County isn’t the only elections board that’s knotting itself into a clusterfarce. Lonzie White, a member of the Albany/Dougherty Election Board didn’t take part in the certification of election results, leading other members to questions whether he is fit to remain on the board.

Board member Walter Blankenship brought up the subject of White’s failure to participate in certification of the election results after the board completed the verification of hundreds of write-in votes cast during the election.

“Mr. White, you seemingly do not want to participate in the certification of elections,” Blankenship said. “Does your failure to do so express a personal desire or position not to do so, or was your nonparticipation Monday due to some unavoidable absence?”

Blankenship said that while he was not making any recommendations at the meeting, Page 8 of the board’s bylaws say that the failure by a board member to perform his duties is grounds for the board to ask for that member’s resignation.

“The highest priority this board has is certifying elections,” Blankenship said. “This is no small matter. It has not come to this point yet, but it’s an opportunity that we might make such a request. Maybe this is not where he’s happy being.”

Meanwhile, the lawyer who represented the elections board by a candidate seeking a ballot slot, will attempt to collect his fees from the unsuccessful candidate.

Dawson attorney Ed Collier told the Elections Board at its November meeting Wednesday evening that he felt the board was entitled to attorneys fees because of the nature of the case filed by Heard and dropped after two days of testimony. He also accused Heard and his representatives of wrongly demeaning staff in the Elections office.

“Our staff were right on the money in (handling Heard’s qualifying application),” Collier said. “We went through two days of court hearings before (Heard) subsequently dismissed his suit, and it is my suggestion that you allow me to ask the judge if you are entitled to attorney’s fees in this case.”

The Brunswick News editorializes that gifts to legislators by lobbyists associated with the World Congress Center as we head toward an expected effort to raise its bonding capacity to build a new stadium in Atlanta provide the best argument for limiting lobbyist gifts to legislators.

Unsuccessful Richmond County Sheriff Candidate Freddie Sanders is shocked that his friends seem to be disappearing after his loss.

Dougherty County has released its county school superintendent in the wake of a test-cheating scandal.

The Georgia Judicial Nominating Commission will interview about 15 of the 75 people whose names were submitted in nomination for the Court of Appeals seat being vacated by Judge A. Harris Adams. The 75 nominees are listed here.

The largest chunk of the bond will go toward the interchange improvements at Ga. 400 and Holcomb Bridge Road at $6 million, which Dippolito said was a about time.

The Roswell City Council initially was considering a much larger bond; however the failure of the Transportation Special Purpose Local Option Sales Tax referendum earlier in the year made them pause in their plans. A pared-down version is what came before the voters to decide.

Georgia’s unemployment rate dropped in October to 8.7 percent, down from 9 percent in September.

Georgia State University economist Rajeev Dhawan expects our state economy to stay in the doldrums for another year.

“So when do we get back to the old normal?  In Atlanta, we get there a little bit faster than Georgia,” Dhawan said.

That’s because about 70% of the state’s new jobs in 2014 will come from the Atlanta region.

Even then, Dhawan said construction jobs won’t have much of a rebate–despite exponential growth in multi-family housing.

Hospitality will see only small growth.

Healthcare, Dhawan said, will remain the bright spot in the economy.

Government subsidies for ethanol production are having a negative impact on the poultry industry, a mainstay of our state economy, according to Abit Massey, president emeritus of the Georgia Poultry Federation.

From fall 2006 to August 2012, there has been a relentless rise in corn prices, Massey said, accounting for a loss of $22.5 billion in the poultry industry.

The University of Georgia calculated that the increase in corn prices, added to the drought in the Midwest, is costing the Georgia poultry industry an extra $1.4 million every day.

In 2011, a 54 cent per gallon tariff on ethanol was eliminated, as were the subsidies and tax credits, Massey noted.

“But the mandatory use of ethanol is still in the law,” he said.

He expressed hope that Congress will eventually repeal the entire law and “let free enterprise operate as it should.”

The implications of the legislation are also notable because of the state’s export presence in the global poultry industry, Massey said.

“Georgia, if it were a country alone, would be the seventh largest poultry producer in the world,” Massey said.

The reduction is expected to lower electricity rates for about 133,000 Sawnee members for November and December, leading to a total savings of more than $2 million over the two months.

This is the second such reduction for Sawnee customers in 2012. The first came in May at about $5.75 per month for the typical residential customer.

The current reduction, which went into effect on Oct. 31, is expected to further reduce energy bills by about $9.50 for the typical user.

However, the savings is based on use, so those who consume less energy may not see as great of a reduction in their bills as those who use more.

Michael Goodroe, president and CEO, said Sawnee prides itself on providing its members with cost savings whenever possible.

“We know that energy cost increases due to environmental regulations, fuel cost swings and other factors are on our horizon. But for now we are proud to lower rates for the second time this year and we know it couldn’t have come at a better time as the holidays approach.”

A report by the Union of Concerned Scientists demonstrates the effect of the Obama Administration’s EPA on consumer prices, arguing that 22 coal plants in Georgia would be more cost-effectively shut down and replaced with new plants than upgraded to comply with government regulation.

The report compared the cost of upgrading pollution controls at old coal-fired units to the cost of shutting down those units and switching to natural gas or cleaner sources such as wind power.

In Georgia, the report identified 22 coal units, which can produce 34.7 million megawatt hours of electricity a year, that should be shut down at Crisp, Mitchell, Kraft, Harlee Branch, Bowen, Hammond and Yates power plants. All but one are owned by Georgia Power.

The Savannah River Site processed more nuclear waste in FY 2012 than in any previous year.

Due to a lack of coffee yesterday, I wrote incorrectly that Philip Wilheit was elected Chair of the Board of Regents; he was elected Vice Chair.