ONE WEEK UNTIL THE GENERAL ELECTION OF PRESIDENT AND VICE PRESIDENT, as well as two seats on the Georgia Public Service Commission, members of the Georgia General Assembly, and local officials across Georgia.

Advance and Early Voting continue through this Friday; click here to check your local times and locations. If you have received your mail-in ballot, go ahead and return it today to ensure it arrives in time. 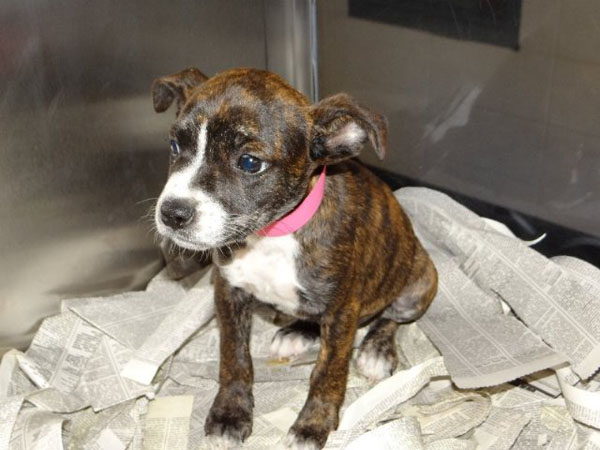 Today’s adoptable shelter animals occupy different stages in life, but cages nearby one another in the Gwinnett County Animal Shelter. 28414 is a young female puppy who will be available for adoption on Friday, November 2d. 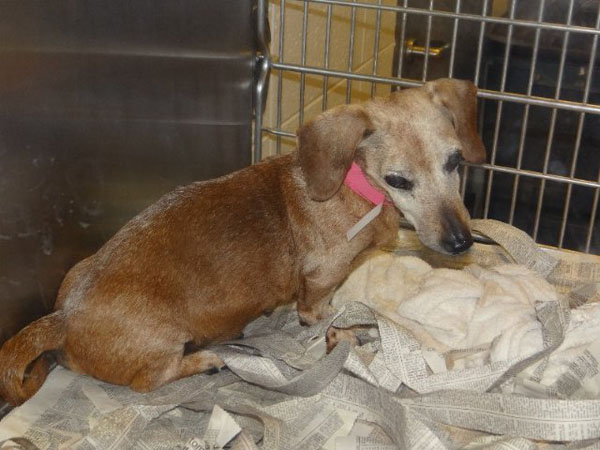 28414 is a senior female Dachshund who is also available for adoption beginning Friday, November 2d. Both deserve a loving home.

The Marietta Daily Journalwrites that the act of voting is an important part of the health of our country.

Few rights in our republic are more cherished than the right to select our governmental leaders at the ballot box.

Yet even as we cast our votes in early voting, and the rest of us Nov. 6, how much thought have we given to this special privilege and duty of a U.S. citizen?

[V]oting has changed, and mostly for the better. After the stalemated 2000 election, in which confusing ballots and “hanging chads” led to the seemingly endless Florida recount, Georgia and most other states went to electronic voting machines to eliminate such issues.

Also, the rise of early voting has caught on nationwide, most states allowing citizens to cast ballots weeks in advance for their convenience. Georgia opens the polls for three weeks, including one Saturday. This year, thousands of Georgians have flocked to the polls, some drawing longer lines than seen on Election Day. Clearly, voters like the ability to cast a ballot when it best fits their schedule.

Columnist Jonah Goldberg has weighed in against the practice of early voting, preferring the shared experience of Election Day, and the concern that some event in the closing days of a campaign could change voters’ mind after their ballots are cast. He has a point, though the chances of that are slim since, as he states, most of those who vote early are solid in their convictions and unlikely to be swayed.

We do agree that voting shouldn’t be so easy that committed Americans aren’t willing to make some degree of effort. It starts with learning about the issues and candidates. Then comes the process of registration and taking the time to fit voting into our busy schedules.

Yet the bit of extra convenience that early voting provides doesn’t take away from that dedication, and may encourage more to turn out. Anything that gets people involved and interested in the process is worth preserving. That’s why we encourage new and better ways to register voters. And while we support photo ID requirements to head off potential fraud, we think states should ensure that everyone has access to such a card, if needed.

Some voters, however, are reporting problems voting with the required Voter ID.

aola Diaz was eager to vote for the first time since becoming a U.S. citizen in 2010, so she carried her passport, voter card, naturalization papers and other documents with her to the polling place at 7:30 a.m. Thursday, only to learn her name was flagged in local records.

Seven hours later, after multiple phone calls, faxes and trips to various government offices, she finally learned that someone accepted her status as genuine. Monday, she voted on her birthday.

She was still wearing the voter sticker she received that afternoon when she spoke to reporters about her ordeal and to warn others to vote early.

“Someone who comes in a facility with a U.S. passport, what else should be needed?” she said. “I feel that all the bureaucracy didn’t make sense as necessary. It’s not necessary.”

Sarah Shaft, an Emory University law professor who represents the Election Protection coalition of legal groups, said a poll worker should have notified a registrar that a passport was presented and requested authority to allow Diaz to vote. Such problems are why she recommends people vote early to leave time for sorting out clerical errors.

Also important to the political process in our country is money: so important that we should consider where it comes from in our system.

Daniel Malloy and Shannon McCaffrey write that most of Georgia’s Congressional incumbents, though virtually assured of reelection, have raised large amounts of money.

The state’s top rainmaker in the House, Tom Price, a Roswell Republican, took in more than $2 million this cycle. His opponent, Democrat Jeffrey Kazanow, raised $6,500 and loaned himself another $30,000.

Of the $1 million Price raised from PACs, 46 percent came from the health and insurance industry, according to data compiled by the AJC and the nonpartisan Center for Responsive Politics. Price, the Republican Policy Committee chair, is one of the most vocal critics of President Barack Obama’s health care law. He also sits on the health subcommittee of the tax-writing Ways and Means Committee.

“They are regulating people and industries they are also dependent on for their re-election money,” said Mary Boyle, a spokeswoman for Common Cause. “And that’s why we have this huge problem of the special interests being so well-represented in Washington and regular people not so much.”

I happen to believe that PACs and “Special Interests” are, among other things, a way in which “regular people” can contribute to the process by aggregating their smaller contributions and targeting them where it is important to them.

Price, who is reportedly seeking the No. 4-ranking Republican leadership post, has donated money to 64 House GOP officeholders and candidates this cycle through his PAC, Voice for Freedom. Price’s likely competition, Cathy McMorris Rodgers of Washington state, donated to 100 members and candidates.

Graves has donated to 34 Republican House colleagues or candidates through his Freedom Advancement Fund PAC as he has mounted a run for chairmanship of the conservative Republican Study Committee. His opponent for the post, Steve Scalise of Louisiana, has given to 107 members and hopefuls through his PAC.

Also drinking deeply from the well of “Other People’s Money” would be the pro-Charter School Amendment groups.

Groups backing the charter schools constitutional amendment have again pulled in far more money than amendment opponents, the most recent campaign filing statements show.  Families for Better Public Schools, which supports the amendment, raised $1.28 million during the filing period that ends 15 days before the election. Families’ haul was 70 times more than the $18,164 the main opposition group, Vote Smart! No to State-Controlled Schools, raised during the same period.

A second amendment supporter, Georgia Public School Families for Amendment One, raised $55,000. Despite the group’s name, all of its money came from a single donation made by PublicSchoolOptions.org of Arlington, Va.

It is more concerning to me that a ballot measure that affects only Georgia attracts more attention from out-of-staters than from natives.

The MDJ also wonders if the prospects of Republican Hunter Hill against Democratic incumbent Doug Stoner in the Sixth Senate District are overhyped.

Yes, the 6th (which stretches from Smyrna into Sandy Springs and Buckhead) is overwhelming Republican. GOP candidates running statewide netted an average 57 percent of votes in the district in 2010, topped by the 63 percent captured by incumbent U.S. Sen. Johnny Isakson (R-Ga.).

But the newly configured 6th is also socially moderate, based on an analysis of past voting patterns of its current precincts. The new 6th gave Rick Santorum, the darling of Christian conservatives, just 10 percent of its votes in last spring’s GOP presidential primary. Looking further into the past, it backed Isakson in his 1996 U.S. Senate race against a strong pro-life candidate (Guy Milner) and President G.H.W. Bush for president over Pat Buchanan in the 1992 presidential primary.

I will say this: Hunter Hill’s primary victory without a runoff against serious competition was earned through hard work and shoe leather, which has continued through the General Election. If there’s a Republican alive who is capable of beating a Democratic incumbent this year, it’s Hunter Hill. Click here to donate or volunteer to help Hunter.

Also flexing shoe leather to help Republicans are Georgians working in Florida and other states to elect Mitt Romney and Paul Ryan.

Romney’s has been recruiting people to trek to Florida, Virginia and North Carolina.

“Georgia is a Republican state,” said Eric Tannenblatt, state finance chairman for Romney. “As we get closer to Nov. 6, it’s logical to put our resources in states where they matter. Georgia’s obviously not one of them. And Florida is.”

Like others, Tannenblatt concedes there’s almost no way Romney can win without Florida’s big bloc of 29 electoral votes.

Although some state Democratic leaders talk about the possibility of Obama upsetting Romney in Georgia, polls indicate otherwise.

“There’s an outside chance we might, but it’s not likely,” acknowledged Chatham County Democratic chairman Tony Center.

Democrats have been hedging their bets.

Even if it’s not enough to put him over the top in Georgia, they hope, a big turnout for Obama in heavily Democratic areas will help the party’s other candidates.

Seven contested partisan races involve Chatham County, and at least three of them are considered competitive.

“Most of the people we turn out for Obama will vote the party line,” Center said.

But local party activists acknowledge the big nearby action for Georgians is in Florida, with its close race between Obama and Romney.

If you’re going to Florida to help Romney this weekend, don’t forget your jean shorts. Looking like a native will enhance your effectiveness.

The competitiveness of SD 30 is partly due to redistricting, which also means that Cobb County Board of Education member Alison Bartlett, a Democrat first elected in 2008, now runs uphill against a GOP majority in her district.

The election for Gwinnett County Clerk of Courts might be the nastiest race in a county renowned for nasty election campaigns.

Mud has been flying in the matchup between Republican incumbent Richard Alexander and his Democratic challenger Brian Whiteside.

Whiteside, a lawyer and former deputy who lost a bid for Gwinnett County sheriff in 2004, has widely distributed a flier and email alleging that his opponent is having an affair with his administrative assistant, Lori Taylor.

Both reference a YouTube video that purports to show the pair leaving a Holiday Inn Express in Norcross on the morning of May 19. Alexander’s wife, who filed for divorce in May, has admitted posting the YouTube video, which she said she obtained from a private investigator.

Whiteside also accuses Alexander in the flier of giving Taylor a “taxpayer sponsored raise of $25,000” by promoting her to a higher-paying position.

“The last thing we need in Gwinnett County is another corrupt official,” Whiteside said.

Alexander and Taylor both declined to respond to the allegation of an affair. Alexander said in an email, “I will not discuss my personal life as a campaign issue.” Gwinnett County does not have a policy that prohibits supervisors from having romantic relationships with employees.

Reached separately, they refuted the claim that Alexander influenced Taylor’s promotion from clerk to administrative assistant.

Alexander has accused Whiteside of an ethical lapse for failing to file campaign contribution and personal financial disclosure reports in June. Whiteside owes a total of $250 in fines for the two infractions, according to the state ethics commission website.

Whiteside said he tried to email the disclosures and apparently they didn’t go through, because he received notice that he was late in filing. He said he mailed the disclosures to the state on Friday.