Advance Voting continues at a brisk pace across the state, with nearly a half-million having voted already. Advance voting continues through Friday, November 2d, and will be open this Saturday, October 27th. Visit the Secretary of State’s website for more information on Advance Voting. 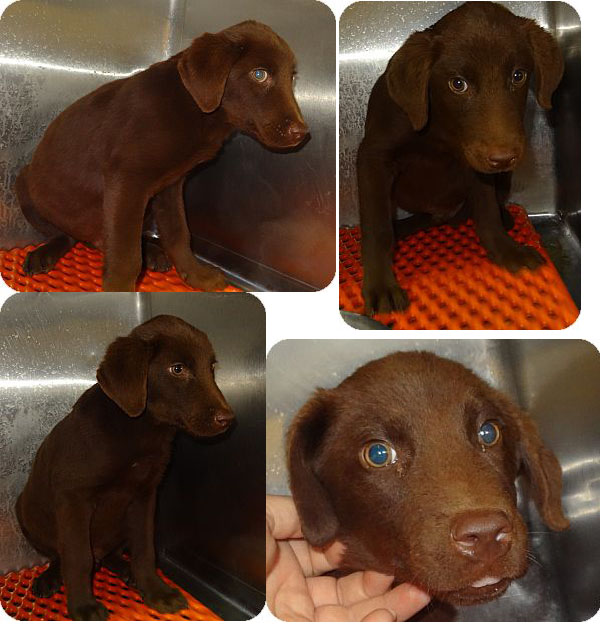 If I were allowed to adopt this puppy, I’d name him Floyd, because he’s available for adoption from the Floyd County Animal Shelter. That and “2411” is an awful lot to yell when you’re calling your dog. If you’re ready to adopt, you can contact Jason Broome at (706) 236-4537 or email him at broomej@floydcountyga.org.

I’m not sure what I’d call this other lab, since Floyd’s already taken, but I’d probably have to break him out of the pokey at the same time I took Floyd home. Maybe I’d call him Roman. His current name is 2410 and he’s also available from the Floyd County Animal Shelter.

Still on the euthanasia list for early Friday morning are these three black lab puppy littermates, who are about seven weeks old and were found abandoned at the side of the road. They are available from the Murray County Animal Shelter and transportation to Atlanta or Augusta are possible if you email me.

“a recent report by the Energy Information Administration showed that Georgia has the highest residential rates [for natural gas] in the United States - continental United States.”

I looked up Georgia’s numbers on the Energy Information Administration website and if what they report for the state was correct, Georgia would have very high rates. The Federal Government’s EIA shows a per therm cost of $2.67 (how to convert cost per mfc to therms here). Checking the Public Service Commission website links to different natural gas marketers leads me to CFEMC Natural Gas, where I can sign up and lock in a residential gas rate of 53.7 cents per therm for the next 12 months, roughly a fifth the rate that the Federal Government shows.

Looking at a twelve-month period, the Public Service Commission’s staff shows a per therm rate range of $1.03 to $1.17 per therm when all costs on the consumer’s bill are included, well under half of what the Federal Government says. The rates available for senior citizens are even better.

So Oppenheimer’s statement is correct, but it relies on Federal numbers that are easily proven incorrect with about ten minutes on the internet and a fourth-grade level of math.

I’m not sure how the Feds got their numbers, but I do know two things: first, this shows that Democrat Steve Oppenheimer will look to the Federal Government and the Obama Administration when he needs information, rather than learn himself from sources in Georgia. Second, it shows that even after having been corrected on statewide broadcast television by a sitting member of the Public Service Commission, Oppenheimer will not let the truth get in the way of his manufactured talking points.

What do you get when you combine political direct mail and recorded messages? Talking direct mail is the unholy spawn. I’d guess we won’t see it in Georgia until next cycle.

Senator Renee Unterman (R-Buford) wants to compare Georgia’s boating laws with those of other states as part of any changes to licensing.

Georgia needs to “compare itself with the rest of the nation” before it moves forward on changing boating laws, the chairman of the newly formed Lake Lanier Legislative Caucus said Monday night.

“We need to make sure our licensure is on par with other states,” said Sen. Renee S. Unterman, R-Buford.

The caucus is in the early stages of addressing lake-related issues, set to hold just its second meeting at 3 p.m. Wednesday at the Northeast Georgia History Center in Gainesville.

Speaking of Senator Unterman, she’ll Chair the first meeting of the Senate Aging Study Committee, which also includes Senators John Crosby (R-Tifton), Mike Crane (R-Newnan), Valencia Seay (D-Riverdale) and John Wilkinson (R-Toccoa). The Committee will meet at 10 AM in Mezzanine 1 at the Capitol.

The Judicial Nominating Commission is accepting nominations for Georgia Court of Appeals for the seat currently held by Judge A. Harris Adams, who has announced his retirement. Nominations are due by November 5, 2012. Governor Nathan Deal will make his fourth appointment to the Court of Appeals, which numbers twelve judges. By the end of his second term, Deal may have an opportunity to appoint a majority of the Court, reshaping it for years to come.

AJC’s Politifact ran a fact-check on Dr. Larry Sabato’s statement that “ that Virginia’s educational level among whites is higher than Georgia,” and the difference explains higher levels of Republican voting in Georgia. Politifact found that even though we are less well-educated than Virginians in that demographic, white voters in Georgia vote Republican at higher levels than Virginians regardless of education level.

This pattern of voters in Georgia and the Deep South of voting for Republicans has been steady despite the education level, said Merle Black, a political science professor at Emory University.

“In a state like Virginia where you have a lot of Northern migrants and people coming in from outside the state, things may be different,” he said.

That’s why many in Virginia refer to Northern Virginia as “occupied.”

Dr. Mel Steely of the University of West Georgia won a Governor’s Award for the Arts and Humanities for his work documenting Georgia’s political heritage. Steely is known to many Georgia Republicans for his long-time association with former Speaker Newt Gingrich, whose biography Steely wrote.

Steely said the governor’s award is specifically for his building the political heritage archive program at the university library, which contains donations from several local, state and national political office holders.

He said the program began sort of incidentally in 1985, when he was working with then U.S. Rep. Newt Gingrich, a longtime friend and professional colleague at the university.

“Newt and I had gone down to see former Sen. Herman Talmadge after he retired,” Steely recalled. “After we’d talked awhile, Newt asked him (Talmadge) if anyone has asked for his papers. After Talmadge said, ‘no,’ Newt jumped in and said West Georgia would like to do a series of interviews. I agreed to set it up.”

Steely said he talked with then-University of West Georgia President Maurice Townsend about the project.

“Being a political scientist, Townsend saw the value of it,” Steely said. “He said he couldn’t offer much money, but would pay for my gas.”

Steely said they decided on the name, “Georgia Political Heritage Program,” and it started out by bringing Talmadge to Carrollton to talk with local groups.

“We made Talmadge an adjunct professor, which meant he had a title, but didn’t get paid,” he said. “We had big meetings with him at the Education Center, where he talked about the presidents he’d known and his favorite politicians. We have about 70 hours of tape with him talking about everything from Watergate to his early political campaigns.”

A Federal judge will decide whether to grant an injunction in the suit by Rev. Joseph Lowery, which asks to prevent the continuation of Brookhaven’s voter-approved incorporation or to allow all DeKalb residents to vote for Brookhaven city offices. Odds: 10-1 against.

“The same claims have been made before, and they were rejected by the district court. We are optimistic that the court will take the same view on this lawsuit,” Kane said.

The defendants will file a motion to dismiss, according to court minutes.

Ralph Smith, the owner of Mr. B’s liquor store, says he isn’t convinced he’d generate enough new sales to offset the costs of opening his shop seven days a week instead of six.

He says he wouldn’t be able to close up shop, either, because he’d have to stay open to compete with other stores opening a seventh day.

Christian groups are also opposing the referendum that would allow the Columbus City Council to OK Sunday sales. They call it an issue of public safety.

Some Cherokee County residents are challenging the qualifications of Commissioner-elect Brian Poole.

Snellville’s City Council voted unanimously to join Gwinnett County in the proceeds of an excise tax on energy if the County adopts the measure.

The county will make the ultimate decision on whether or not to impose the tax, but cities must opt into — or out of — intergovernmental agreements (IGAs) even before that happens.

Snellville City Manager Butch Sanders urged the approval of a resolution giving Mayor Kelly Kautz the ability to ready an IGA for the city. The proposal passed unanimously.

If implemented by the county, the tax would include a total 2 percent counter-hike on manufacturers’ energy bills, made up of individual 1 percent special purpose local option sales taxes — one for a general SPLOST, the other an education SPLOST.

The county government hosted a briefing with representatives from several local cities in late September. At that point, the county had not yet made a decision whether or not to participate.

Individual cities, if they choose, must enter into intergovernmental agreements to collect their portion of the new taxes by Saturday, even prior to the county’s decision, which must be made by Nov. 27.

Sanders said Monday the city expected the county to choose to enact the tax.

Politically-divided couples work out best when the man is Republican, charming, and handsome. At least that’s what the first paragraph of a CNN story and my own personal experiences teach me.

“We have our differences and it really becomes apparent in election time. That’s usually when it gears up, when everything comes to the forefront,” said Melissa Reylek-Robinson, a 34-year-old mother of two in San Diego. “Election time is probably the worst time for us. We definitely get into some heated debates.”

For many, political loyalties can make or break a relationship. But couples who have learned to successfully weather political partisanship could teach us all a thing or two about relationships in general, said etiquette expert Anna Post.

“These are admirable couples. It takes a lot of patience and passion and respect for the relationship, especially where large political divides exist,” said Post, spokeswoman for the Emily Post Institute and great-great-granddaughter of Emily Post. “To be able to do that successfully speaks to the kind of relationship these couples have.”

Political differences don’t always lead to political discord, she said, and shouldn’t be considered insurmountable. If Democrat James Carville and Republican Mary Matalin can talk along party lines on television as full-time jobs, others can learn to do it in small doses.

“The fact that I believe in (government-mandated) health care and he doesn’t is not something I’m going to divorce him over,” she said. “At the end of the day you have to realize that you love the person for things other than their political beliefs.”