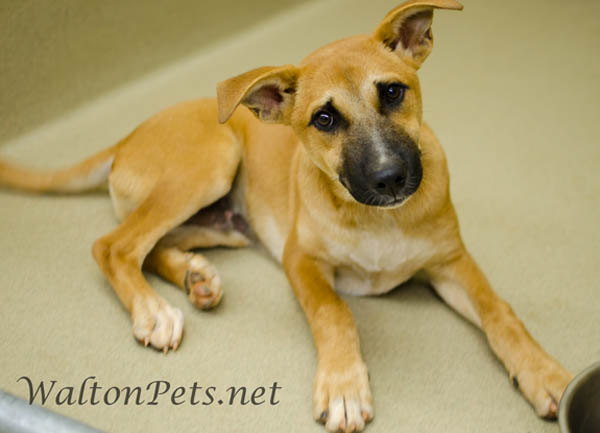 Rally is a 5-month old, 30 pound Shepherd mix who is available for adoption today from Walton County Animal Shelter. The adoption fee is $40, which includes full vaccinations, a voucher for reduced cost neutering and a sack of dog food. Because Rally looks just like my blind, old dog Roxy did when she was young, I will sponsor her adoption; this means that if you adopt her, I will reimburse the $40 cost. Seriously. 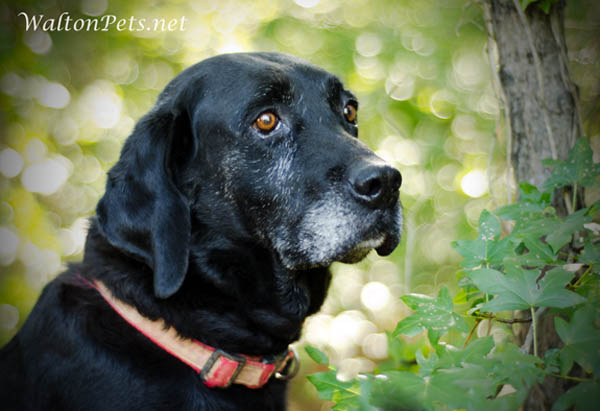 Dolly is a senior lab mix who looks like she was somebody’s dog, and she has ended up at Walton Animal Shelter, where she will be available starting tomorrow. She has possible arthritis, as it’s difficult for her to stand up, but in my experience with a senior Golden Retriever, it can likely be managed with medication and/or acupuncture and chiropractic. If you have questions about canine acupuncture or chiropractic, I am not an expert, but can provide a referral and tell you about our experience and how it changed our senior dog’s life. There is a place in heaven reserved for people who adopt senior dogs, and if you’re looking for a mellow, low-maintenance best friend, maybe there’s a senior for you. 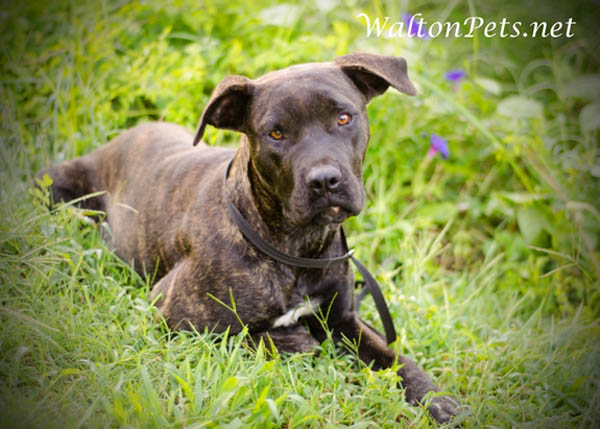 Anna is still waiting for a home at Walton County Animal Shelter. Her picture has captured many peoples’ imaginations, and she has an online fan club. Maybe you’re the person for her. 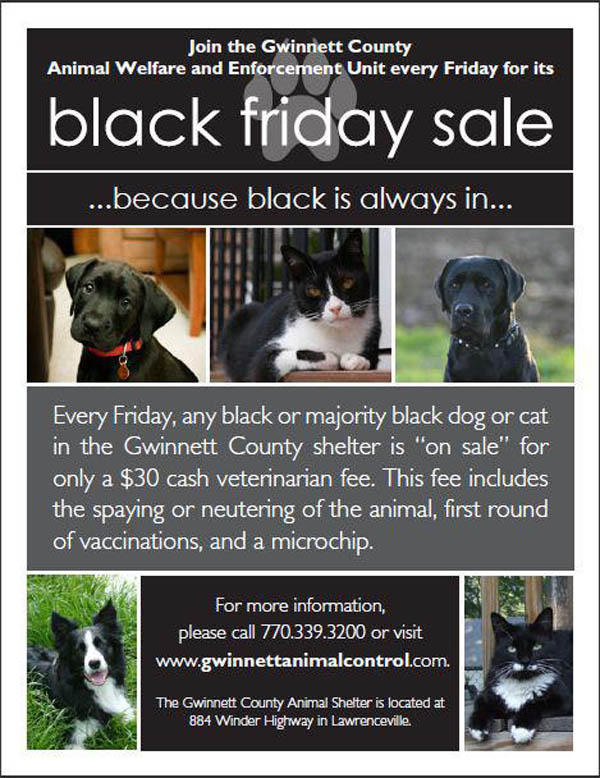 Gwinnett County continues “Black Friday” where they waive 2/3 of the cost of adopting a black or mostly-black dog or cat, so your total cost is $30. 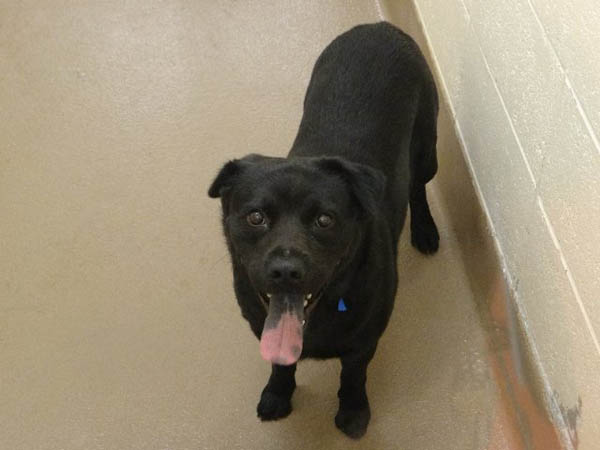 27055 had a brush with death this week at Gwinnett County Animal Shelter. Scheduled for euthanasia on Tuesday, he was such a good dog that nobody at the Shelter could bring themselves to put him down. He got a couple extra days reprieve and has now gone to a rescue group, but other dogs at the shelter will not be so lucky. Visit Gwinnett County on Facebook and maybe you’ll find your next dog.

Shelter Me is a public broadcasting feature on how rescue dogs have affected the people who they saved, including women in prison who are learning to train dogs to develop job skills, and veterans being helped with PTSD.

Election offices across Georgia are looking for poll workers to help out on November 6th for the General Election.

October 9th is the deadline to register for the November 6th General Election.

Please take a moment to vote in our online survey on the Charter School Amendment. We ask how you will vote, and give you an opportunity to state why you are voting for or against the Amendment. We’ll be running some of the responses when we release the results. If you have any problems with the online vote, email me.

The term for the next Chairman of the Bibb County Board of Commissioners is only one year, but candidate Tom Wagoner has released a plan to make the most of the short tenure.

[Wagoner] rolled out his to-do list today in front of a crowd of supporters in front of the Bibb County Courthouse. Wagoner spelled out 10 different goals he wants to achieve. They include getting an interim animal shelter up and running, and televising commission meetings.

The candidate also wants to audit and edit the code of ethics for the board of commissioners. He says if you look closely, the current commissioners are breaking a lot of rules.

Despite the short term the next chairman will serve, Wagoner says it’s important to have a plan because it’s time to get things done.

“I think you gotta have a plan. I’m a business man and we have an annual budget and we have a plan. So if you set that track record now, then you got a map to follow, and I don’t want to just sit here and just willy-nilly do business as it comes up. So let’s sit down, and set out goals and a business plan, and let’s deal with these issues,” says Wagoner.

Wagoner also says he won’t accept pay, or a county car if elected. He will face Democratic incumbent Chairman Sam Hart in the November election.

Ethics will be part of Wagoner’s campaign, if his press conference is any indication.

Wagoner also took aim at incumbents without mentioning their names. He called for the county’s ethics code in its policy manual to be revisited.

“They break more rules on page 12 and 13 (of the policy manual) than anybody ever thought of,” Wagoner said of the ethics code.

Commission Chairman Sam Hart, a Democrat who faces Wagoner in November, could not be reached for comment Thursday afternoon.

–Tom Wagoner will work with his fellow County Commissioners to establish an Employee Benefit committee made up of employees that represent the various County departments. –

–Within the first 6 months, Tom Wagoner will review all vendor and consulting contracts.

–Tom Wagoner will assemble an advisory group of business people from within the community that will be instrumental in consulting with the Commissioners on major issues.

–Tom Wagoner will audit the Code of Ethics the County Commissioners function under which will be conducted in order to review and expand the scope of the Code.

–All County Committee and Board meetings will be televised.

–Tom Wagoner will reduce the Bibb County budget by $800,000 to $1 million within the year.

–Work will be done to identify available funds to begin lengthening the runway at the Macon Airport.

–An interim Bibb County animal shelter will be established until the new one can be built.

–Tom Wagoner will work to rescind the motion that was put in force earlier this year that limits citizen speaking time at County Committee meetings to 3 minutes.

–With the other Commissioners, Tom Wagoner will help attract new industry and business into our local economy to create more jobs for the citizens of our community.

–During his service as County Commissioner, Tom Wagoner will not take any payment for the position or use the county car.

“I will work with the other Commissioners in order to move our community forward and fight the stagnation that has gripped our local government for too long.  It is time for the people and businesses of Macon and Bibb County to take their government back.  It is time to stand up and vote to MOVE FORWARD!

The Tom Wagoner 365 Day Plan – Real Solutions – Real Results for Bibb – offers the people of Bibb County a real world plan to move us forward – together – so we save taxpayer dollars, create good paying jobs, and manage Bibb County for the people – not the politicians,” concluded Wagoner.

Anne Romney visited Atlanta yesterday for fundraisers at Sugarloaf Country Club in Duluth and Atlanta Athletic Club in Johns Creek, and her husband Mitt Romney, visits the Atlanta Marriott Marquis for a fundraiser next week. Likewise, President Obama’s last trip to Georgia was for private fundraiser.

That’s because there’s no reason to fight over Georgia’s electoral votes.

Since Georgia is firmly a red state, Barack Obama didn’t win here in 2008 and he’s not expected to beat Romney here this time around.

“Historically for the last twenty years, Georgia has been a solidly Republican state and there’s nothing to suggest that it’s going to change,” Emory University political science professor Andra Gillespie told 11 Alive.

So why do the presidential candidates come here then?

It’s because Georgia, especially metro Atlanta, is a cash cow.

It’s a great place for both sides to raise donations and spend them elsewhere.

“This is definitely a place where they can raise money and then funnel those resources to other battle ground states such as Virginia or Florida or North Carolina,” said Emory’s Gillespie.

According to the Federal Election Commission, Romney has already raised $4.6-million in Georgia to Obama’s $4.4-million.

Democratic Congressman John Barrow (D-12) continues to distance himself from his party’s Dear Leader President Obama, recently changing his website to remove reference to his support for Obama’s agenda in Washington.

When U.S. Rep. John Barrow’s staff updated his campaign website bio earlier this year, there were lots of additions and subtractions.

One subtraction has raised eyebrows, especially in Republican circles.

The congressman has sought to distance himself from Obama and has cast some conspicuous votes against the president’s agenda. But he’s also campaigned with Obama’s endorsement and once told voters he was working “hand in hand” with him.

And, as recently as February, the accomplishments listed on the website included the following:

“Standing with President Obama to pass the American Recovery and Reinvestment Act, which has already brought over $200 million in funding for roads, hospitals, schools, transportation, and housing to communities in the 12th district.”

The item, a reference to what’s more commonly known as the economic stimulus bill, is denounced by Republicans as a wasteful boondoggle.

So why was the language on the website that touted the stimulus bill dropped from his list of legislative feats?

“The stimulus just wasn’t a high priority issue for this election cycle,” he said. “We have other matters we would like to talk about.”

A Get Out the Vote commercial was shot in Macon for an unidentified PAC.