The loneliness of being right – Senator Josh McKoon’s Minority Report

The loneliness of being right – Senator Josh McKoon’s Minority Report 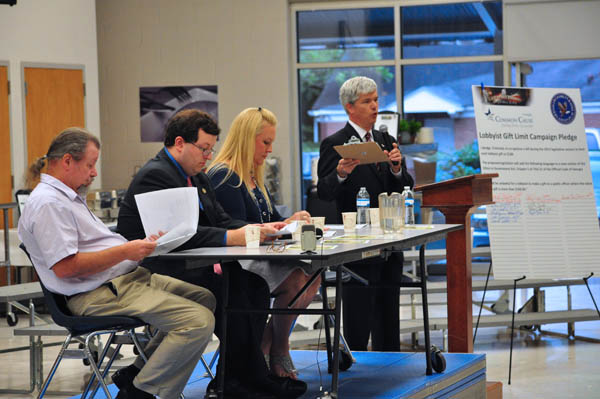 Here it is in .pdf format.

As close as I can do quickly, here’s the text of Senator McKoon’s Minority Report, which dissents from the negotiated settlement between Senator Don Balfour and the Georgia Senate Committee on Ethics. All mistakes are mine, I’m certain:

IN THE MATTER OF THE GEORGIA SENATE ETHICS COMMITTEE COMPLAINT AGAINST SENATOR DON K. BALFOUR

REPORT OF THE MINORITY

Pursuant to Senate Rule 2-1.6(a), this report succinctly sets forth the reasons for the dissent of the Minority to the Report of the Senate Ethics Committee filed with the Secretary of the Senate regarding this matter on August 16, 2012.

Following the report of a subcommittee on May 2, 2012 to the full Senate Ethics Committee, a majority of the committee determined that it could not exercise jurisdiction under Title 45 of the Official Code of Georgia, Annotated. The minority dissented from that vote and for reasons that will be set forth in detail below agreed with Christian that. jurisdiction did lie under Title 45.

A subcommittee was then appointed which reviewed information relevant to the Christian complaint and determine whether Respondent had violated Senate Rules. The subcommittee gave its report to the full Senate Ethics Committee on June 1,2012 and on that same date the full Committee voted unanimously to initiate an Ethics Complaint against the Respondent which alleged that he had filed false expense reports. He was served with the complaint that day.

On May 17, 2012 Deborah Dooley (hereinafter “Dooley”) filed a complaint against Respondent pursuant to O.C.G.A. Section 45-10-91 alleging improper per diem and mileage expense requests, and later amended the complaint to also allege that Respondent had failed to establish an Audit Subcommittee of the Senate Rules Committee, of which Respondent has served as Chairman for approximately the last ten (10) years. The same subcommittee which had reviewed the Christian complaint was charged with reviewing the Dooley complaint so as to report to the full committee on how to proceed with respect to this new complaint.

On July 12,2012 the subcommittee issued its report on the Dooley complaint to the full Senate Ethics Committee. Following the report, a majority of the committee determined it could not exercise jurisdiction under Title 45 of the Official Code of Georgia, Annotated. The minority dissented from that vote and for reasons that will he set forth in detail below agreed with Dooley that jurisdiction did lie under Title 45.

The full committee voted unanimously to amend the existing complaint that had been initiated against Respondent to include the allegation regarding the failure of Respondent to comply with O.C.G.A. 28-1-8 requiring the Senate Rules Committee to establish an Audit Subcommittee to review expense reports filed by members of the Senate

On August 16, 2012 the Committee discussed and reviewed the evidence. The Respondent and his legal counsel were present and offered unsworn testimony regarding the allegations. Following this colloquy, the Senate Ethics Committee concluded that Senator Balfour failed to maintain accurate records of his travel and consequently submitted inaccurate vouchers to the Legislative Fiscal Office.

The Committee then voted to issue its report and, following negotiation with Respondent and his attorney, agreed to the sanctions, a $5,000.00 fine, restitution of $366.96 and that an audit subcommittee be established and perform as required by O.C.G.A. 28-1-8(e).

The Minority agreed that Respondent had violated Senate Rules by failing to maintain accurate records and submitting false expense reports; however, dissented from the negotiated sanction.

RATIONALE FOR AREAS OF DISSENT

There are two bases under which the Senate Ethics Committee may exercise jurisdiction over an ethics complaint. The first is when a citizen files a complaint which meets the requirements of O.C.G.A. 45-10-90 el sou. The second is when the Committee on its own authority or other authorized party under Senate Rule 14.10 initiates a complaint. As noted above, the Senate Ethics Committee chose to dismiss both the Christian and Dooley complaints due to lack of jurisdiction under Title 45.

Since neither Christian nor Dooley qualified as authorized persons under Senate Rule 1-4.10 the only way to further investigate whether the claims made were meritorious was for the Committee lo initiate its own complaint, which it did.

It is clear to the Minority that both the Christian and Dooley complaint meet the jurisdictional threshold of Title 45 and should have been handled under Title 45. Both complaints alleged that the Respondent used his position as State Senator to file false expense reports which provided for a direct, unique, pecuniary and personal benefit, namely the monies wrongfully disbursed to Respondent. The amended Dooley complaint went a step further, alleging that by failing to authorize the Audit Subcommittee as required by O.C.G.A. 28-1-8 that the Respondent was able to insure that the false expense reports would never be reviewed. In this case, O.C.G.A. 45-10-92(b) governs how proceedings are to be conducted:

Instead of proceeding under Title 45 with the complaints presented which would have necessitated a public hearing of these matters, the Committee chose to proceed under the other route available which did not require a public hearing. The opinion of the Minority is that this decision was made in error and that the public, including the complainants, were entitled to be present for the proceedings held by the Committee.

Without getting into the question of intent on the part of the Respondent, the facts are that false reports were filed with the Legislative Fiscal Office by Respondent and that Respondent received monies he was not entitled to under the law. The Committee decided it was sufficient to fine the Respondent, ask for further restitution to be paid and that the Audit Subcommittee be appointed and begin meeting.

The Minority reviewed the case of State Senator Roscoe Dean, who was censured by the State Senate in 1976 for similar offenses, namely filing false expense reports, including claiming trips from his home in Jesup, Georgia to Atlanta on dates when in fact he was registered at a hotel in the Bahamas. Senator Dean was prosecuted on theft charges, and while those charges ended in a mistrial he was still censured by the Georgia State Senate on February 5, 1976.

In addition to the charges of filing false expense reports in this case, the Respondent also admitted to violation of O.C.G.A. 28-1-8 which provides for the Audit Subcommittee to review the expense reports of all Senators.

In the view of the Minority, this compounds the other offense as by the Respondent’s failure to appoint the Audit Subcommittee he removed the safeguard against false filings, not just in his case but in the case of any Senator that might have done so over the last decade he has been charged with the responsibility of chairing the Senate Rules Committee.

The Minority is of the opinion that to fully conclude this matter, that an appropriate authority should investigate these matters and determine finally if any violation of these statutes has taken place. The Minority will transmit this report to the Attorney General with its recommendation that his office conduct such an investigation.

It is the opinion of the Minority that Senate Rules should be changed so that regardless of the channel an ethics complaint travels that, upon a showing of probable cause, that subsequent proceedings be open to the public. The taxpayers have a right to know about these proceedings and going forward the Senate should ensure its rules allow for proceedings of the nature that occurred on August 16, 2012 to be made public.