Payday is a 4-year old yellow lab mix boy who is being left at Walton County Animal Shelter by his owners. $40 brings him home with you with a microchip, $15 voucher for spay/neuter, and up-to-date vaccinations.

Today’s Georgia Pundit is both late and short because, in the ultimate irony, Georgia Power has chosen today to trim some trees I’ve been complaining about for years. Power outages mean no internet at home.

Tomorrow is election day. That will mean a brief respite from robo-calls on Wednesday until the runoff campaigns get cranked up. I’ll spend Tuesday night not going to any victory parties but watching the returns on the new Election Night Reporting system on Secretary of State Brian Kemp’s website. 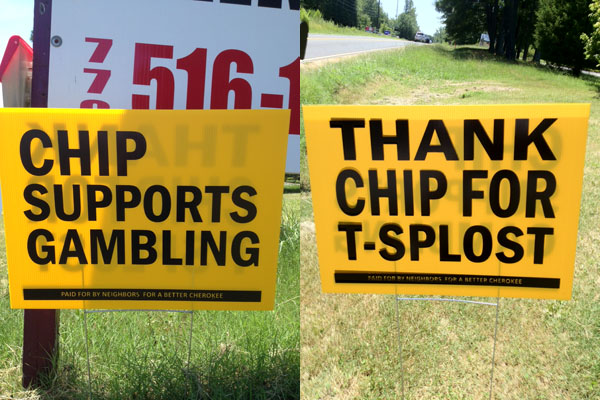 The pro-gambling, and pro-T-SPLOST “Neighbors for a Better Cherokee” have put these signs up all over the county in support of Senate Majority Leader Chip Rogers, who faces Brandon Beach in the Republican Primary tomorrow. That’s what these signs mean, right?

For a recap of issues in the Rogers v. Beach race, the Cherokee Tribune has a profile of the election.

In Athens, some local Democrats are suggesting that fellow Dems cast Republican ballots this year for the purpose of voting against Doug McKillip, who switched from the Democratic party to the GOP.

According to the motion to dismiss the bankruptcy, Kenerly “has resolved or is well underway with the process of resolving problems and issues with his secured creditors and there is very little unsecured debt in his case.”

In addition to his private creditors, county records show Kenerly owes nearly $21,000 in late property taxes, penalties and interest on his Braselton home and an adjoining lot.

In a robocall supporting Martha Zoller in the Ninth Congressional District, Sarah Palin apparently mispronounces Zoller’s name. Or maybe it’s a clever ploy to get the AJC to write yet again about Martha Zoller being endorsed by Sarah Palin.