If you’ve always wanted to lead a pack of sleek Basset Hounds, Gwinnett County Animal Shelter has got a pair for you. An adult male on the left, and young male, probably mixed, on the right, both are said to be friendly.

The deal is that Gwinnett is offering $30 adoptions through July 28th, which include microchip, first round of shots, and spay/neuter. That’s less than the average cost of microchipping alone in a veterinarian’s office. $30 for your new best friend. Also, I’m pretty sure adopting a dog is good luck for you candidates out there. 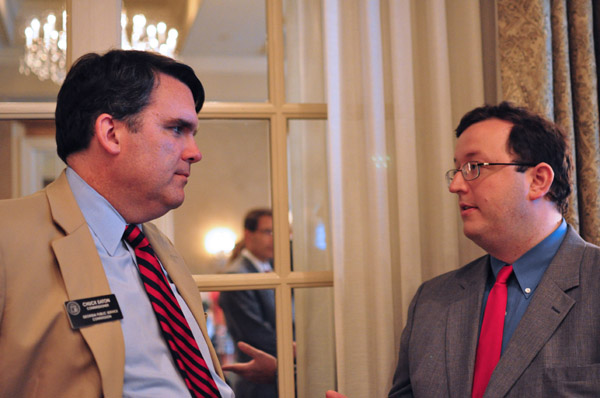 There is a very important statewide race on the Republican Ballot for Public Service Commissioner. Chuck Eaton, one of our incumbent Commissioners is on the ballot and has a primary opponent.

I have known Chuck Eaton for many years. He takes his obligation to serve the people of Georgia seriously and is a man of integrity.

I hope you will stand with me in voting for Chuck in his primary election. Chuck has earned re-election in my view, by being an advocate for consumers at the PSC and always looking for ways to innovate in the regulation of utilities. So please vote Chuck Eaton for PSC in the Republican Primary.

The National Rifle Association’s Political Victory Fund rated Senate Majority Leader Chip Rogers “B” on his legislative record last year for the stated reason, apparently because they blame him and Senate President Pro Tem Tommie Williams for killing a bill that would have protected the right of employees to keep firearms in their cars at work parking lots. His opponent, Brandon Beach, received an “AQ” which means an “A” grade based on a questionnaire rather than a legislative record. The rest of the NRA ratings in contested primaries are available here. 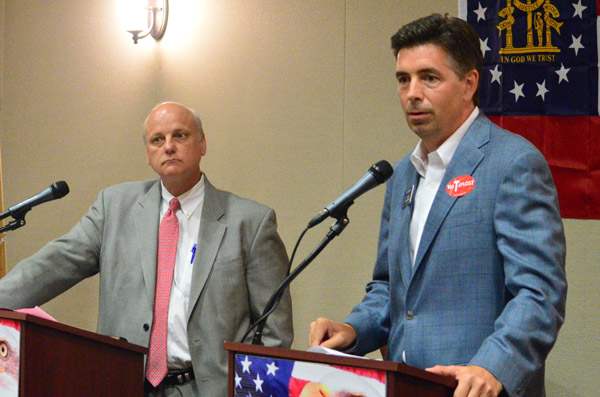 In the North Fulton Tea Party debate last night, Rogers attributed his grade to a political game being played by a lobbyist with whom he has a frosty relationship. I’m not sure which of these lobbyists he means.

Here’s my takeaway from the debate: first, Chip Rogers put on a display of professional politics that makes me move his electoral target in the primary to 65-35. Second, Beach’s service on the GDOT board may end up being a liability among voters who spend part of every day in rush hour on GA-400.

The surprise of the night for me was that Senator Rogers answered a question on the proposed video casino in Gwinnett County in a way that sounded a lot like he would at least not oppose it, and might actually support it. He answered a follow-up question about the Republican primary ballot casino gambling issue saying that he will vote for it.

The Georgia Supreme Court upheld provisions of the 2005 tort reform law that allow juries to consider the actions of third parties that led to the action and reduce the defendant’s liability on that basis.

Justice Harold Melton, writing for the court’s majority, said the law “makes all persons responsible according to their respective percentages of responsibility.”

Bryan Tyson has a quick summary of the decision on his SCOGblog.

Governor Nathan Deal has appointed John “Trea” Pipkin III as solicitor for the Flint Judicial Circuit, comprising Henry County. Pipkin had qualified for State House district 111 in the Republican Primary but will end his campaign, leaving Brian Strickland the presumptive GOP nominee; Strickland will face a Democratic opponent in November.

Despite a 2010 decision by the United States Supreme Court, local courts across Georgia continue to close proceedings to the public. The Cordele Judicial Circuit is being sued to force open courtrooms.

John Allen, chairman of Georgia’s Judicial Qualifications Commission (JQC), has warned judges that closing courtrooms “could be a violation” of state judicial canons “depending on the set of facts surrounding the closing.”
Even lawyers have been stopped by security asking about their business before the court. JQC Director Jeffrey Davis told the Daily Report: “I’ve personally experienced the chill that members of the public would feel,” he said. “I’m a lawyer. It’s not that I’m under-dressed for court.”
Davis added that once a visitor has passed through courthouse security at the entrance, “No citizens should be questioned about the reason they are in a public courtroom.”

Kathy Schrader, who is running for Superior Court was endorsed by fellow Gwinnett County Bar Association past president Sheriann Hicks.

Court-ordered requalifying for Bibb County Board of Elections using the new district maps has produced changes in the races, moving a previously unopposed incumbent into a three-way race for reelection.

Shellnutt said although the county sees a 40-percent turnout, at the highest, during most July primaries, she expects this year to be different.

“I do think we’ll have a higher turnout during this presidential year,” she said.

One election official, who asked not to be identified, said many of Monday’s voters were particularly interested in the county’s partisan races, as well as a Transportation Special Purpose Local Option Sales Tax referendum.