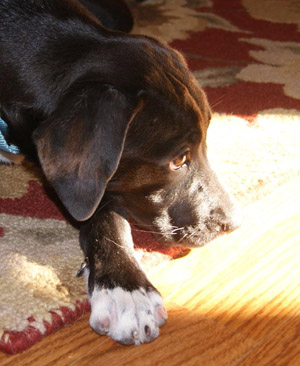 “Sweetwater” is a four-month old puppy who is available for adoption or foster and is said to be calm, sweet and an enthusiastic television watcher.

She is available for adoption from Angels Among Us Rescue and will make someone a great pet. You can also support Angels Among Us by donating online, applying to be a foster parent, or volunteering at adoption events.

Angels Among Us and other rescues are in dire need of foster homes now, as local shelters are flooded with the annual summer influx of dogs or cats.

Although much attention is being paid to the dollars that lobbyists spend to entertain legislators, the really big money in Georgia politics comes in the form of campaign contributions, many of them also made by lobbyists.

Balfour is the freebie king among Georgia legislators. Lobbyists have treated him to so many baseball games, football games, and golf tournaments over the years that Balfour has acquired the nickname “Donnie Ballgame” from capitol reporters.

The lobbyist gifts are but a drop in the bucket, however, when compared to the campaign contributions Balfour has amassed.

The scandal of Georgia politics…is that this financial gusher is allowed under current state law.

That fact may be disturbing to many voters.

Crawford doesn’t suggest a solution for what he consider to be a problem, possibly because donations to political campaigns are protected by the First Amendment to the Constitution. 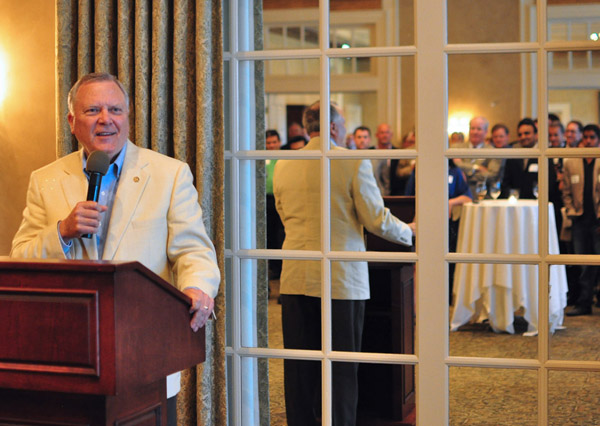 Governor Nathan Deal spoke to the crowded ballroom, saying “[David Shafer] has been an important and stabilizing force in the State Senate.”

Lt. Governor Casey Cagle mentioned that Shafer was one of the first people he spoke to after first deciding to run for State Senate in 1994, and said:

David is one of those individuals I always turn to when it comes to championing very important legislation through the body of the Senate.

Attendees included Public Service Commissioner Chuck Eaton, Senators Renee Unterman, Frank Ginn, Josh McKoon, and Curt Thompson. Shafer has been mentioned as a possible contender for President Pro Tem of the Senate next year, as Tommie Williams is retiring from the leadership spot, but running not the Senate.

President Barack Obama drew about 500 to his money-hoovering operation in downtown Atlanta and asked the wealthy donors who paid $500 for the reception or $36k for a private roundtable to help him continue the progress that’s been made under his administration. The Democratic National Committee is picking up the tab for the trip.

The only positive change anyone could identify from Obama’s trip was the 37 cents from his order at The Varsity.

“I will be the first president in modern history to be outspent in his re-election campaign, if things continue as they have so far,” said Obama in a fundraising email sent out to his supporters.

Governor Deal welcomed President Obama to Atlanta with a scorching op-ed at RealClearPolitics:

Welcome to Georgia, Mr. President. We hope you enjoy your stay here during this important week in your presidency. The Supreme Court is going to rule on your signature legislation, Obamacare. We here in Georgia have strong opinions about this law. No matter how the Court rules on its constitutionality, we believe that it is bad for Georgia, bad for businesses in Georgia, bad for the healthcare system and bad for the country.

The fact of the matter is that Obamacare is not only a federal power grab but also an unfunded mandate that will cost the taxpayers of Georgia an additional $4.83 billion over the next 10 years. It takes decision-making away from consumers, away from doctors, and away from the state of Georgia and concentrates it in the hands of unelected federal bureaucrats. That’s just not the way our federal system is supposed to work. It’s not the American way. The American way puts power in the hands of individuals not of government.

Mitt Romney has put forward a vision that is much more in line with opinion here in Georgia. He believes in giving individuals and giving states decision-making power. He’ll fight to rescind the crippling costs associated with Obamacare, and he’ll work to reduce federal spending. He’s spent a lifetime in business. He knows how to balance a budget.

It’s time for a new president who can truly move us forward, not by growing government, but by shrinking it and giving all Americans a chance to live the American dream.

Speaking of Obamacare, the Atlanta Tea Party will hold a “Countdown to Obamacare Decision” at the State Capitol on the Washington Street side on Thursday, June 28th from 9:30 AM to Noon. Tea party supporters are asked to join and bring signs, but signs must not have wooden or wire stakes. If you have trouble locating them, look for a group of polite, well-dressed folks.

Governor Deal will hold a press conference at 2 PM on Thursday to address the Supreme Court’s ruling.

Martha Zoller, who is running for the Republican nomination in the Ninth Congressional District will hold a virtual Town Hall to discuss the Supreme Court’s ruling from 2 to 2:30 PM.

Earlier this week, ShePAC, a conservative political action committee working to elect conservative women to federal office held fundraisers for Martha Zoller in the Ninth District. They also held a Washington, DC fundraiser with former Secretary of State Condoleeza Rice to benefit Zoller, and Maria Sheffield, among other candidates.

Maria Sheffield, who is among the field of candidates for the 12th, accused fellow Republican candidate Wright McLeod of “stalking” and trying to intimidate Sheffield by sending campaign staffers to videotape her every move.

Jim Galloway writes of Sheffield’s challenge to McLeod to cut it out:

That McLeod has singled out Sheffield as a worthy rival says something.

This is what Sheffield ought to be emphasizing, rather than relying on a word like “stalking,” which implies passivity, victimhood and a lack of control. Not qualities endearing to a GOP primary crowd.

Galloway’s not the only male writer to see this as a positive for Sheffield. James Richardson at Georgia Tipsheet wrote:

The investment of staff and resources is an indication that internal polling has found the two dipping from the same well of voters.

But here’s my thought: maybe women are more sensitive to being followed around by people whom they don’t know than male military veterans, and maybe that issue resonates more with the women who will likely constitute a slight majority in the Republican Primary. Not to mention that Sheffield just gained coverage in the Augusta Chronicle and Atlanta Journal-Constitution.

Forsyth County Sheriff Roger Garrison is so desparate to escape the trouble caused by the surfacing of a decades-old photo of him in a KKK robe and mask that he admits wearing to a costume party that he’s now blaming his opponent for the photo, despite the TV station that first ran the photo saying it was not given to them by Garrison’s opponent.

“David Waters can deny all he wants. This is very political; it came out of his camp, and it is a sign of desperation,” he said. “When candidates get desperate, this is what they do.”

Waters, who is challenging Garrison in the July 31 Republican primary, said he did not hand the photo over to the television station.

“I did not do this,” Waters said. “If I were going to do something like that, I would have done it a lot sooner than now. If I was going to do it, why would I wait this late in the game? We are running a clean campaign, and from the indication we’re getting, we’re winning the election.”

Waters said he saw the photo last June, and reviewed the photo with a magnifying glass. He said, based on his review of the photo, he felt like it was an authentic KKK robe, but he decided not to use the picture. He said he slid it back to the man who brought it to his attention.

“If the voters want to judge me for what I did 30 years ago at a Halloween party, I think they need to look at him long and hard over his 30 years and his five marriages,” Garrison said. “He has taken us down this street; he opened this door, I didn’t. I would have stayed above that and would have never mentioned it. I have known since the day he qualified how many times he has been married, and I have never put that in print.”

Waters, in response to Garrison’s comment about him being married five times, said his marriages have nothing to do with his ability to be sheriff.

“I have not been successful in my marriages, but I’ve never been to parties displaying jokes about it either,” he said. “The wife I have, I’m very happy, I’m very satisfied. I’m very proud of my wife, and I love her to death. I sure do.”

Activists are again protesting the 50-cent toll on Georgia 400. In a shock to absolutely no one, a Georgia Department of Transportation employee said he supports the T-SPLOST. Also favoring passage of T-SPLOST: political consultants feeding from the trough. In favor of T-SPLOST without a direct economic stake in it: no one I’ve met.

In Henry County, Zoning Board Chairman Terry Echols pled guilty to selling real estate without a license and is resigning from the Board. This came as the result of a request for an investigation by blogger Joanie Scott that initially focused on a sale by Echols’s firm of land to the County.

In Gwinnett County, Tracey Mason Blasi, the niece of developer Wayne Mason is running for Superior Court Judge touting her experience as a municipal court judge in Duluth.

As a Judge in Duluth Municipal Court, she demonstrated integrity and fairness while overseeing all of her cases promptly and efficiently.

Left out of her campaign bio was that the municipal court judgeship was created for Mason Blasi specifically to oversee zoning issues in the city.

Tracey Mason Blasi, an attorney practicing in Lawrenceville, has been appointed assistant municipal judge for Duluth.

Duluth has established a zoning court, and Blasi will handle strictly zoning issues.

“This is really her forte,” said Mayor Shirley [Fanning] Lasseter.

Last month, then-Commissioner Shirley Fanning Lasseter pled guilty to accepting bribes in exchange for a vote on a zoning issue before the Gwinnett County Commission.

Georgia’s voter turnout ranks 34th in the nation with 59.6 percent casting ballots in 2008.