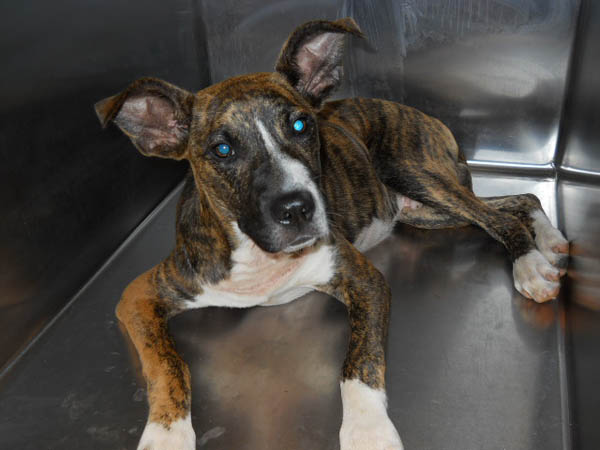 “25037” is a bouncing baby boy boxer, who is available for adoption today from the Gwinnett County Animal Shelter. The shelter is open for adoptions from 8 AM to 4 PM Tuesday through Saturday and from noon to 4 PM on Sunday.

Much has been made of the consent order between Christopher Brady, who took Speaker Ralston to Europe to learn about high-speed trains, and the State Campaign Finance Commission. Under the consent order, Brady will pay a $300 fine for failing to register as a lobbyist on time and for reporting the trip expenditure late.

I believe that the consent order reflects two real problems with the Commission’s case.

Any natural person who, either individually or as an employee of another person, is compensated specifically for undertaking to promote or oppose the passage of any legislation by the General Assembly, or any committee thereof, or the approval or veto of legislation by the Governor;

There are several other subsections, but the unifying theme is that lobbyist are people who promote or oppose the passage of legislation. The logical extension of that definition is “no legislation, no lobbying, no problem” and that was the position taken by Brady’s lawyers. Had the Commission gone forward, it risked having that definition parsed by a court and there’s a real chance that Brady might have prevailed on that argument.

The second problem is that the Commission may lack the resources to pursue three major cases against the kind of people who are able to hire McKenna Long to defend them.

Non-binding: Do you support ending the current practice of unlimited gifts from lobbyists to state legislators by imposing a $100 cap on such gifts? 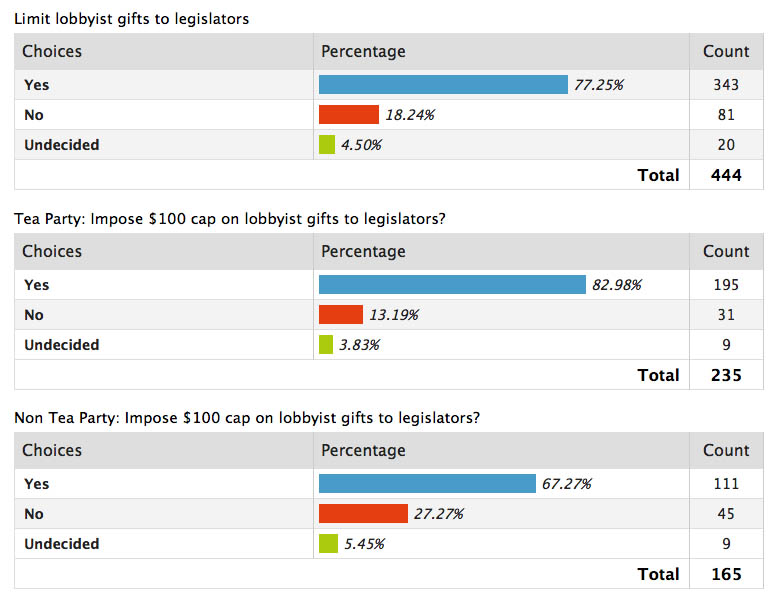 Dennis O’Hayer has an interview with Mike Raffauf, the lawyer representing the Green and Constitution parties in a federal lawsuit seeking to overturn Georgia’s strict ballot access law.

Eight Hispanic candidates are running for office in Georgia this year, the highest number ever. One of those candidates is Linda Becquer Pritchett, a niece of a famous salsa singer; Pritchett is running for State House District 63 in Clayton, Fayette, and Fulton counties.

The US Department of Justice has approved district maps for Bibb County Board of Education seats. Bibb County decided earlier this year to qualify candidates for board seats elected this year based on the old maps and it is uncertain whether the old maps or new maps will be used.

State Rep. Allen Peake, R-Macon, said he has talked to several people in the community who have expressed an interest in making sure the new maps are used this year.

“I would fully support that effort,” he said. “It’s the proper and right thing to do for the community.”

If the matter is taken to court over using the new maps, it could reopen qualifying and delay elections, [school board member Gary] Bechtel said.

Robert Brooks, District Attorney for the Tallapoosa Circuit, will run for reelection in the Republican Primary.

“Justice delayed is justice denied. That is why I have made it a priority to secure grants to fund new resources for both victims and witnesses. I have added more victim advocates to help victims and witnesses navigate the complex court process,” Brooks said. “The word is out among the criminal defense attorneys that this office will not back down from the tough fights.”

Another area of focus for the District Attorney’s Office is combating the explosion of hyper-violent juvenile offenders. Brooks said it seems that offenders are getting younger and more violent. That is why he created an impact team to process juvenile cases.

“It is difficult to grasp, but you actually have juveniles who are literally one person crime waves.”

The Tallapoosa City Police Department and Pete Bridges, Mayor of Tallapoosa, are the first to announce endorsement of Jack Browning for district attorney.

“With Jack’s extensive experience working with and for local governments, he knows that public safety is vital to the well-being of our community and for the economic development in our county,” Mayor Bridges said.

Browning currently is chief assistant public defender for Haralson and Polk counties. Earlier he served as the County Attorney for Haralson County, while also practicing law for the Bremen-based firm, Murphy, Murphy and Garner.

A couple things stand out here. First, I’ve never heard of a police department purporting to back a candidate before. Second, that Bremen law firm Browning used to work for bears the name of former Speaker Tom Murphy. The Tallapoosa Circuit comprises Haralson and Polk Counties.

Mayor Pete Bridges of Tallapoosa also endorsed Bill Carruth for state senate in his challenge to incumbent Senator Bill Heath. That seems like an awful lot of drama between Haralson and Polk Counties.

Senator Bill Heath, and challengers Bill Carruth and Jason “J.K.” Rogers, met in a debate hosted by the Paulding County Republican Women’s Club and moderated by the AJC’s Jim Galloway. T-SPLOST was a major issue in the discussion.

None of the State Senate candidates supported the TSPLOST, but Heath admitted to voting to put it on the ballot because he believes that the people should be able to make their own decision on the subject and that he should not make it for them.

Rogers agreed with putting it on the ballot, but he added, “The biggest concern I have, and I’d vote no, is because it will never work if each city and each county don’t agree with one another. You can’t have highways going through different counties and doing different things.”

When asked about alternative methods to solving the situation of Georgia’s lack of transportation funding, each candidate gave a different answer.

Carruth stood strongly against the TSPLOST, refusing to believe it is the last resort to solving the issue. He claimed that there is no definite answer right now but that there must be a collaborative effort between all departments to find one.

Heath disagreed with the many areas of transportation covered by the TSPLOST, saying that it would be more effective to focus on one area.

Rogers’ stance was that more community involvement and efficient leadership would trickle down to solve the issue.

“Either they’re incompetent and they did this unintentionally or they did this intentionally. I don’t know which one. At this point many of the people who got the letters don’t trust the Department of Registration and Elections, and neither do I.”

And I am left with the stunning realization that I agree with Senator Fort on something.

At a Brookhaven forum on T-SPLOST, Phil Kent took aim at the Beltline project that is to be funded by the sales tax increase:

Atlanta Progressive News goes so far to the left that they meet Phil Kent coming around from the far right and also oppose the Beltline’s inclusion in T-SPLOST. APN’s take is that the Beltline is a development project that is designed to gentrify poor neighborhoods and will displace existing residents who are being asked to pay for the T-SPLOST.

Atlanta Progressive News has reported in depth for several years on how the Beltline is primarily a development, rather than a transportation, project, aimed primarily at raising property values and property taxes, thus gentrifying neighborhoods throughout Atlanta.

Furthermore, with sales taxes being a regressive form of taxation, meaning that they disproportionately burden working families, that means that Atlanta’s working families are now being asked to fund their own housing cost burden and possible displacement.

Phil Kent and Matthew Cardinale of APN are left with the stunning realization that they agree on something.

Power to the People

Stricter air quality standards from the US EPA will require less particulate from trucks, power plants, and other sources, and Atlanta is likely to be in compliance by the time the regulations are in full effect:

Jack Capp with the air protection branch of Georgia’s Environmental Protection Division says emissions have been going down in the Atlanta metro area for the past few years and are expected to continue dropping.

“On the books rules are going to drive emissions down quite a bit. That primarily is scrubbers that are being put on all the coal-fired power plants, large industrial boilers having additional pollution controls, as well as new cars and trucks that are a lot cleaner today.”

Lower natural gas prices have helped lower the average Georgia electric bill by $8 this month and are driving down gas bills. Also helping lower bills is the diversification of Georgia’s power portfolio to include more natural gas-powered generation, which results in part from actions of the Georgia Public Service Commission.

The Chairman of France’s Atomic Energy and Alternative Energy Commission toured Plant Vogtle yesterday to learn about the new reactors being built there by Southern Company.

France generates 75 percent of its electricity from nuclear sources – the highest percentage of any nation – and is second only to the U.S. in the number of commercial nuclear power reactors.

Plant Vogtle’s $14 billion expansion represents the first new commercial reactors to be built in the U.S. in three decades, so it will be watched closely by other nations, he said.

In particular, the world will be watching to see if its operator – Southern Nuclear – is able to complete the project safely, on time and within budget.

“The U.S. has been the first nation to move on with nuclear, and it has the largest fleet,” he said. “It is a time when you need to show to the public that we can move on.”

The Pew Center on the States says that Georgia should be saving more money to pay for healthcare expenses for retired employees.

[Pew spokesman David] Draine says the state still has time to save the money needed. But he says it will require state policymakers to make some tough choices.

They will have to decide whether to raise taxes, cut services or require state retirees and employees to pay more of their own healthcare expenses.

Georgia’s Department of Natural Resources is looking for volunteers to help with their statewide survey of bats.

As part of a long-term, nationwide survey, the DNR Wildlife Resources Division is enlisting volunteers to begin collecting acoustic data from Georgia bats in the wild this month. The effort will help better monitor changes in bat populations, particularly in the face of widespread threats such as white-nose syndrome.
The disease also often referred to as WNS has killed an estimated 5.7 million to 6.7 million bats.

Georgia’s 16 bat species eat insects only and use biological sonar called echolocation to navigate, communicate and find prey. The survey that wildlife biologist Trina Morris is organizing will ask volunteers to drive a 30-mile route or “transect” carrying equipment that can record and decipher bat calls by species.

Perhaps they can get Batdog to lend a paw. [That link contains some mild cursing in text.]