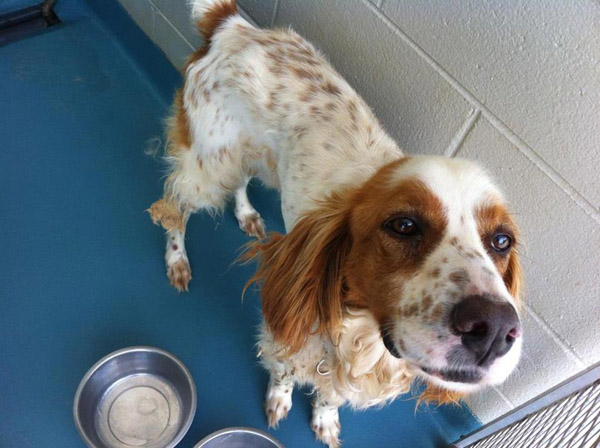 “Murphys” is a gorgeous English Setter who has found himself in a shelter in rural middle Georgia. Angels Among Us Rescue is trying to raise $250 and locate a volunteer to foster this five-year old who is said to be great with kids and dogs. This dog is expected to be adopted quickly, but he must have some place to go when he’s pulled from the shelter and while he gets vetted for his new home. To help, please visit Angels on the web or hit the donate button below.

Here’s a short analysis I wrote yesterday of the T-SPLOST ballot question from our online survey: briefly, it appears that T-SPLOST is in deep trouble among the most conservative part of this year’s primary electorate. With non-binding resolutions on casino gambling, lobbyist regulation, and personhood, conservative groups will be driving their followers to the polls this year regardless of local races.

Results from three of the other ballot questions are presented below, and the only thing I found surprising is that opposition to casino gambling is only 50%, while 39% support it if it helps fund education, and 11% are undecided.

If this had been a random sample, I suspect it would be even closer. Nearly 71% of respondents described themselves as Pro-Life, and this seems a little bit high. I know several Pro-Life activists who passed the survey link around. 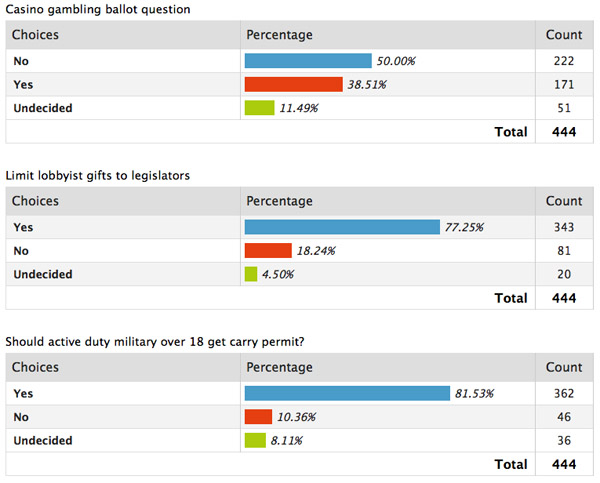 Yesterday’s mid-day post with breakouts of the T-SPLOST ballot question was delayed a bit when my day job conflicted with this free blog. I’ll post some breakdowns of today’s ballot questions today and will aim for noon, but make you no promises.

A bumper crop of qualification challenges

Maybe I’m running across more of these because I’m looking for them, but it appears that more challenges are being filed against candidates this year than ever before.

Flanagan formally applied to the parole board to have his civil and political rights restored, and the board pardoned him and restored his rights in April 2009, according to parole board spokesman Steve Hayes. Being pardoned does not mean his criminal record was expunged, Hayes said, but it does mean he regained the right to run for office.

Flanagan was released from state prison Sept. 10, 1993, nearly 20 years ago, and had his rights restored, meaning he is eligible to run for county commissioner.

In House District 81, Chris Boedeker has challenged the right of Dr. Carla Roberts to appear on the Republican primary ballot, claiming that Roberts has not lived in the district the requisite one year.

Boedeker states that his opponent maintains her primary residence outside the district, claiming a homestead exemption on that property, and the property she recently purchased inside the district is being used simply as a means to seek election to office.

Carla Roberts replies that she lives at the address from which she qualified, which can be verified by the creepy guy Boedeker’s campaign sent to her home in what Roberts describes as an attempt to intimidate her out of the race.

“For several weeks, Chris Boedeker and his political consultants Steve Schultz and John Garst have engaged in a campaign of whispers, lies and intimidation to try to bully me into dropping out of this race. On Saturday evening, a man showed up at my house, apparently to try to frighten me into dropping out of the race.   I will not be bullied. I will protect myself and my daughter from their actions, and have reported this incident to the authorities.”

“Since his campaign of intimidation isn’t working, Boedeker is now attempting legal intimidation and filed a frivolous complaint to have me removed from the ballot. His ridiculous accusation is that I don’t live where I live.”

The complaint filed by Boedeker alleges that DeKalb County property tax records show that Roberts has conflicting homestead exemptions. My experience with DeKalb County government is that their record-keeping is suspect at best, and I’d be hard-pressed to rely on them.

In any case, it should be an interesting challenge before the Secretary of State’s office, as Roberts will be represented by Bryan Tyson, of Strickland Brockington Lewis, arguably Georgia’s top Republican election law firm, and Boedeker has hired Doug Chalmers of Political Law Group, also a very good election lawyer.

Complaints seeking to remove Rebecca Keaton and Joan Davis from the ballot for Cobb Superior Court Clerk were both dismissed.

Atlanta Progressive News raises questions about the soap opera that appears to be State Rep Rashad Taylor’s residency and whether Taylor is eligible to run for office.

Brandon Beach should vacate his seat on the DOT Board, according to a challenge filed with Secretary of State Brian Kemp’s office, as Georgia law states,

Kemp press secretary Jared Thomas told the Cherokee Tribune, “At this point, there has been no determination” with respect to the complaint against Beach.

Congressman Paul Broun has agreed to two debates with Republican primary opponent Stephen Simpson; one will be in the Athens area where Broun lives, and one in Macon where Simpson lives.

“Congressman Broun hopes that his challenger, Stephen Simpson, will readily agree to join him in these debate opportunities.”

Rogers has defended against tax increases and worked to streamline state government, often in the face of intense pressure from appropriators and their special interest allies. Most recently, Senator Rogers has stood up against a multi-billion dollar tax increase for expanded public transportation, an unpopular but extremely principled position.

“You have I think a tremendous nominee. I can say this from personal experience. I did everything I could to stop him (laughter), and he is a great competitor. I think he learned an immense amount from the ‘08 campaign and I think he applied it very, very well. He has a great team across the country.

“I’ve done a lot of work recently with his core group in Boston. I’m very impressed with them, I find that they are open to ideas, that they are very professional, and they are very focused on subordinating ego to patriotism and focusing on getting the job done for America.”

When Newt Gingrich says you’ve got your ego under control, the Gentleman knows of what he speaks. Right?

Romney’s trip to Atlanta hoovered-up about $3 million and included a closed-door meeting with House Speaker John Boehner, who was also in Atlanta.

After her first complaint against Tea Party Patriots and the Canton Tea Party was dismissed, Cherokee County Commissioner Karen Bosch has filed another complaint, this one alleging that neither organization is registered with the Georgia State Campaign Finance Commission.

In the latest complaint, Bosch alleges the Cherokee Tea Party Patriots have been collecting money and using the funds to convince voters to reject the upcoming sales tax referendum to fund regional transportation projects. She also alleges the Canton Tea Party Patriots, chaired by Carolyn Cosby of Ball Ground, Review and Recommendations Committee to Assist County Government chairwoman, has been raising money to influence voters on which candidates to support in upcoming local elections.

Signs supporting Michael Caldwell for Catoosa County Superior Court Clerk have appeared on a building owned by a Superior Court Judge Brian House that is leased to another lawyer, and in front of the Judge’s home, possibly in violation of rules of the Judicial Qualifications Commission that state that a judge should not publicly endorse a candidate for political office.

Channel 3 took a copy of the code of conduct when we paid a visit to Judge Brian House’s home to ask about the signs.

He changed his story three times.

“I didn’t put it there,” said House, standing on his front porch Monday.

“I guess Mr. Caldwell did, I didn’t put the sign up,” he said, when asked who placed the sign on his property line.

“I have no idea who put it up there,” House then said when asked if he believed Michael Caldwell would take responsibility for the sign’s placement.

House then told us the sign was on his neighbor’s property.

Channel 3 talked to Judge House’s neighbor, who tells us the sign is not his. He says it belongs to Judge House, and House didn’t ask before placing it on the property line.

A new movie called “Fear of a Black Republican,” is out now and includes this tidbit about former Fourth Congressional District candidate Catherine Davis:

The movie’s most interesting “get,” however, may be a Georgia House hopeful named Catherine Davis, a black woman running as a Republican in a heavily black, Democratic district. She begs for support from party officials, and gets little — one staff volunteer is told, when making get-out-the-vote calls, not to mention her name in conjunction with prominent Republican candidates.

I’ll go ahead and say that if the story is true, the state party was correct not to pour resources into the fool’s errand that is any Republican campaign for the Fourth Congressional District.

Sheep and wine appear to be the best way to buy votes in the other Georgia.

Kakha Baratashvili is head of Rustavi city council. Earlier this year, Transparency International Georgia reported that he distributed wine and sheep to the population for Easter, in a way that may be in breach of the rules.

Local pressure groups have said that the Easter gifts, which come in the midst of an election year, may fall under the law’s definition of political bribes.

After the election legislation was amended late in 2011, it is now prohibited for politicians to give gifts to voters. This may be understood as bribery, including giving away presents to people for free. The Chamber of Control is entitled to monitor political subjects and their money transfers and fine them in case of illegal transfers and abuse of powers or using legal persons for illegal financing for political purposes.

If you’re in Gwinnett County and can’t keep yourself from looking for prostitutes, seriously avoid Backpage.com.

Last week, a UGA professor was arrested for prostituting himself:

An undercover officer met Sasha, who later was identified as Reinhart, Smith said. “He was dressed in a woman’s fishnet body suit,” he said.

Reinhart and the undercover officer came to an agreement to exchange 30 minutes of sexual service for $60. “After they came to the agreement, that was enough for a charge,” Smith said.

Barrow County Sheriff Jud Smith told Channel 2’s Kerry Kavanaugh that he did not know Kelly was a police officer until Monday night.

The sheriff said Kelly’s arrest was part of a sting operation with the Georgia Bureau of Investigation. He said an undercover deputy posed as a prostitute in an ad on online service listing Backpage.com, and arranged a meeting with Kelly at the Winder Best Western.

Smith said Kelly came to an agreement for services with the undercover officer and exchanged money before he was arrested.