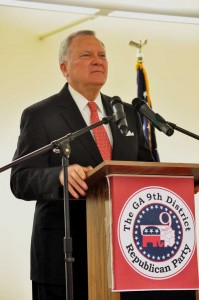 Griffin, the current accounting officer, will succeed Russell Hinton, who is retiring on June 30. The governor’s appointment of state auditor must be confirmed by the General Assembly next session. Skelton is deputy director with the State Accounting Office.

Hinton was appointed State Auditor in June 1999 and confirmed by the General Assembly in March 2000.

Greg Griffin
Griffin became the state accounting officer in August 2008. Griffin has more than 30 years of experience in accounting, auditing and financial reporting. Prior to his employment at SAO, Griffin completed a nearly 25-year career with AT&T and its Bellsouth Corp. and Cingular Wireless affiliates. He started his career as an auditor with Deloitte Haskins and Sells. Griffin’s professional affiliations include the American Institute of Certified Public Accountants, the National Association of State Comptrollers, the Georgia Society of CPAs (GSCPA), and the Alabama Society of CPAs. Griffin graduated with highest honors from Auburn University and is a Certified Public Accountant. He is married to Cynthia Griffin and has two sons, Scott and Brian.

Alan Skelton
Alan Skelton was named the deputy director with State Accounting Office in September 2010. Skelton was responsible for the overall planning, coordination and delivery of the state’s regulatory financial reports including the CAFR and BCR and issuance of accounting policies. Skelton came to the State of Georgia with more than 15 years combined experience at Ernst & Young LLP and the State of Florida Auditor General’s Office. Skelton’s background includes financial reporting, internal audit, business process risk and controls and information technology consulting. Skelton earned a bachelor’s degree in Accounting and Finance from Florida State University and is a certified public accountant.