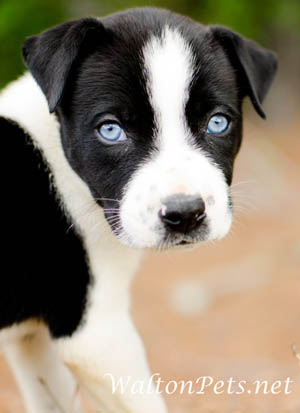 “Smokey” is approximately two months old and weighs 5.6 pounds. A mixed-breed male puppy, he is available for adoption tomorrow from Walton Animal Control Services. If you’re looking for a female puppy or a pair, his sister “Stella” is also available.

Sponsored posts - Yesterday we announced that we will be accepting sponsored posts for the rest of the month to raise money for dog and cat rescue in Georgia. For $1 per word, you can place your message on our website and morning emails. Make a donation to a dog or cat rescue, send us proof of the donation and what you want to say. Sponsored posts will be clearly identified as such and we reserve the right to edit them. No attacks, please.

Bibb County Commissioners are considering building a new animal shelter with four times the space of the existing facility as part of a move to reduce the number of euthanizations performed.

Governor Nathan Deal signed House Bill 397 by Rep. Jay Powell (R-Camilla) yesterday, which strengthens Georgia’s Open Meetings and Open Records laws by increasing the fines for violating the law, reducing the cost of photocopies of requested records from .25 per page to .10 per page, and updating the law’s language with respect to electronic records.

In a press release, Gov. Deal said, “This legislation toughens enforcement of our Open Records law by substantially increasing penalties for noncompliance, allows for civil as well as criminal procedures and requires that all votes take place in a public forum. We have crafted a document that makes it easier for Georgians to keep track of their government’s activities and to know their rights, and it clarifies the responsibilities of public officials.”

Republican Attorney General Sam Olens said, “The law signed today will enable Georgians to clearly understand their rights and assist governments in more effectively responding to citizens. Moreover, it provides my office the tools needed to properly enforce the law.”

Full text of the press releases is available on our website.

The background of Georgia Democratic Party Political Director Ali Rashad Richey and his future in politics are in question as Georgia Unfiltered writes:

You see, Rashad Richey was arrested twelve times on a variety of charges including:

This is likely to provide fodder in the ongoing struggle within the Georgia Democratic Party between supporters and detractors of Chair Mike Berlon.

The Gainesville Times notes that attendance at political events in their area appears to be increasing.

Congressman Jack Kingston has raised $1.25 million to defend his seat. His opponent, Democrat Nathan Russo has not filed with the FEC, stating that he has not raised or spent the $5000 threshold amount to trigger the reporting requirement.

Congressman Paul Broun has raised nearly $1 million in this reelection cycle and has $275k cash on hand.

That story reminds us of the distinction between money raised from other people, and that money loaned to the campaign by the candidate. Whether that distinction is important to you likely depends on which candidate you are supporting, but the candidate’s own money spends just as effectively as other people’s money.

On that note, a reader called me yesterday about our blurb stating that Geoff Duncan had raised more money than former Rep. Tom Knox in the campaign for state house district 26. Duncan’s total is $88k against Knox’s $37k, but Duncan loaned himself $55k, which allowed him to claim the lead. Without the loan, Duncan has raised less from other people than Knox.

Qualifying for Fayette County Commission elections may be delayed if US Justice Department review of new district lines under the Voting Rights Act takes the full time allowed. Commission District one, two and three are up for election this year. District Two commissioner Herb Frady faces challenger David Barlow and District Three Commissioner Lee Hearn faces Randy Ognio. Commissioner Steve Brown has denied being a member of the NAACP, which is suing the county over district lines.

Augusta District One Commissioner Matt Aitken will run for reelection and faces challengers Lori Davis and Stanley Hawes. There was earlier some drama about whether Aitken would run for reelection as he complained about unfair treatment by the media.

Deborah Marshall, who heads the Columbia County elections department is recovering after emergency surgery for a brain tumor.

Rebecca Yarbrough, Chair of the White County GOP sends the following information about debates and forums in the new Ninth Congressional District.

The Whitfield County Board of Education voted unanimously to place an ESPLOST on the July 31 ballot.

Fayette County Republican Party Chair Lane Watts is embattled again, as some within the party allege he committed voter fraud and are seeking to remove him from party office.

“On September 27, 2011, the appeal alleges that Watts changed his voter registration on his election in an application to the Georgia Secretary of State which affirmed, under oath, that he resided on Gelding Garth Lane in Peachtree City, 15 days after his district changed to the 13th.”

The appeal alleges that the property at that address is under lease by a family completely unassociated with Watts except for a landlord/tennant relationship and they’re asking him to provide “a copy of all of the leases that he has had with these renters to disprove who had the current legal right to lie at this address.”

“Prior to the county convention these inquiries about Lane’s residency were being made openly and the news was discovered by Lane Watts. Which caused him to make another drastic change to his residency.”

On the day of the March 10 county convention, Lane Watts appeared and announced he had moved back to his Patricia Lane residence.

“When asked when this occurred, he said that the application to change residency had occurred that very day. He said he had moved out of that residence in February.

“This one address changed everything. Lane Watts was elected as a delegate of the 11th precinct, 3rd district. He then claims to have moved his residency and therefore, was no longer a qualified elector from the 11th precinct. He admitted he did not live in the 11th at the time of the convention, which means he was no longer a qualified elector/delegate from the 11th, and therefore, unable to serve as a delegate to the convention.”

Watts was unavailable for comment except for his email statement:

“I’m not at liberty to discuss this matter at the present time since party legal counsel is currently reviewing it. I will have plenty to say about this issue in the very near future.”

Gov. Deal was reportedly in the dugout at the Braves game last night, but I have not seen confirmation of this. Deal will travel to Valdosta next Wednesday, April 25th for a breakfast with the Valdosta-Lowndes County Chamber of Commerce.

Gov. Deal, asked how Mitt Romney should transition from running as a conservative to a moderate, said, “I would have absolutely no idea how to do that.”

The Georgia Board of Pardons and Paroles has delayed the execution of Daniel Greene, which was scheduled for this week, so that the Board may have more time to consider his case.

The South Carolina Senate has approved borrowing up to $120 million toward dredging for the Port of Charleston.

South Carolina’s financial disclosure laws provide that incomplete filing may be grounds for removing a candidate from the ballot, endangering up to a dozen candidates for each house of that state’s legislature.